Report and highlights from the Sky Bet Championship clash between Birmingham and Blackpool at St Andrew's as Lukas Jutkiewicz scored a late goal to seal a 1-0 victory for Lee Bowyer's Blues on Saturday. 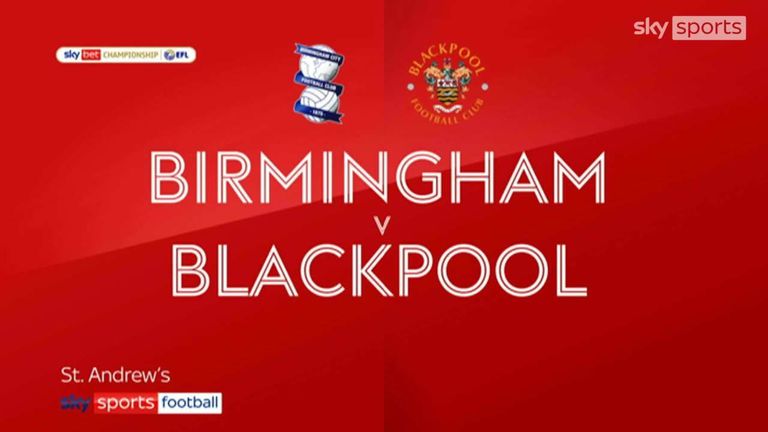 Highlights of the Sky Bet Championship game between Birmingham and Blackpool.

Substitute Lukas Jutkiewicz dragged Birmingham out of the mire by scoring the winner in the 1-0 victory over Blackpool at St Andrew's.

The 32-year-old striker netted in the 81st minute from only Birmingham's second effort on target in a game of few chances.

But it was a dream full debut for 17-year-old midfielder Jordan James, whose header teed Jutkiewicz up.

Until then Blackpool had looked the more likely scorers, but they were foiled by goalkeeper Matija Sarkic and denied a possible penalty as they made it five games without a win.

Blues went close to taking the lead after 40 seconds - and some fans briefly thought they had.

Jeremie Bela unleashed an angled shot from 25 yards that hit the side-netting after it initially looked like it might have drifted inside the stanchion.

Blackpool then got into a mess entirely of their own making.

A combination of two defenders flicked on a long throw-in from Marc Roberts towards their own goal and goalkeeper Dan Grimshaw was forced to tip the ball over the bar.

But from then on, Blackpool went on to dominate the rest of the first half.

The visitors' first attack saw them go close as Gary Madine stabbed over after getting ahead of Roberts to Keshi Anderson's left-wing cross.

Blackpool had a sniff of two chances in quick succession before going desperately close to the opening goal.

Another Anderson cross picked out Demetri Mitchell rushing in to pounce, but Sarkic was on to it in a flash.

Birmingham invited pressure on themselves when Kristian Pedersen pulled down Kenny Dougall, earning a booking and from the resulting free-kick, Mitchell's effort curled agonisingly wide.

Reece James tried his luck again from distance with another low drive - this time fully 30 yards - but his effort was wayward and drifted well off target.

Blues created the first opening of the second half, although it came to nothing as Scott Hogan briefly got clear only to check and try to find strike partner Troy Deeney but his pass was cut out.

Blackpool responded with the best attack of the game that brought the first serious save from Sarkic.

Substitute Josh Bowler exchanged passes with Owen Dale down the right and his left-footed effort was diverted behind off the foot of Sarkic.

It looked like Blackpool might have had a case for a penalty in the 77th minute. Substitute Shayne Lavery burst into the box only to take a tumble under a challenge from Ivan Sunjic but the referee waved play on.

Blues made Blackpool pay for not turning their earlier dominance into goals by snatching the winner when the ball came off Jutkiewicz's thigh after Jordan James glanced on Pedersen's cross.

Birmingham's Lee Bowyer: "I spoke to him [Jutkiewicz] and said it's been tough for him because Troy has played in the last few weeks and got assists and Lukas hasn't done much wrong. I told him I still feel the same way about him but that he's got to be pushing and then when he gets his chance, grab it. I said to him to go and win us the game and he did so I was very pleased for him. He's a good pro and I know if he gets a chance, there's a good chance he will take it."

"Ten clean sheets from 20 games is some going. The players deserve a lot of credit for that because it's hard work - you have to work for that. It's a case of: 'If your mate is out of position, can you help him out?'"

Blackpool's Neil Critchley: "Sometimes if you don't produce better quality than what we produced, you get what you deserve. I'm not sure we deserved any more because we didn't do enough when we had the opportunities we created. In the first half we were in the ascendancy, played some good football, had some good attacking moments, and created some decent opportunities.

"Our play was not as good in the second half and our collective decision making and quality in the final third was poor. While it's 0-0 you always run the risk of Birmingham doing what they do well, which is get the ball in the box from a throw-in, corner or cross like the goal came from. Arguably it (goal) could have been offside but that was the decisive moment."