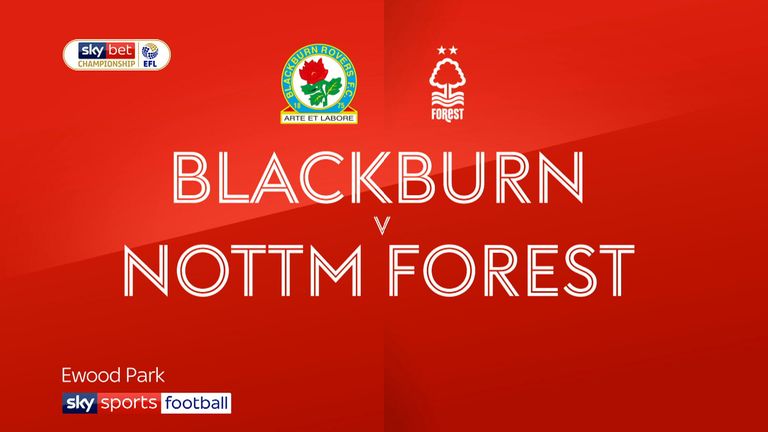 In a breathless game, Forest forward Grabban was very much at the centre of proceedings, missing an early penalty, before heading his side into a second-half lead.

But Rovers fought back with two goals in a nine-minute spell - Adam Armstrong's cross-cum-shot, and a Bradley Dack tap-in - which looked enough for a win that would have been deserved on the balance of play.

Grabban atoned for his earlier penalty miss, though, with a confident spot-kick to secure a point in a game that should have produced even more goals.

The sides remain on the same points, with identical win-loss records. Blackburn's unbeaten home league run is now at 25 games, while it is now 11 games since Forest tasted away victory.

Paul Downing was handed his first Championship start for Rovers, replacing the suspended Derrick Williams from the victory at Stoke. Forest made three changes from their last league outing, including the returning Jack Colback.

Grabban's first taste of the action came in the ninth minute, when Darragh Lenihan conceded a penalty for grappling with Michael Hefele. The striker's effort crashed against the bar and over.

It jolted the hosts, who responded with a lovely move that saw Dack cross for Danny Graham, whose controlled volley was parried behind.

Colback then saved a certain goal with a stunning diving header off the line to deny Graham, who lofted a shot over Costel Pantilimon that was destined for the net.

The hosts continued their dominance of the first half, with a superb effort from Dack that cannoned off the crossbar.

Forest took full advantage of that good fortune with a swift counter-attack that saw Joe Lolley's cross cushioned by Joao Carvalho into Grabban's path and he comfortably buried a close-range header.

But Rovers were not behind for long and Armstrong equalised 13 minutes later - his cross completely deceived the goalkeeper and looped in off the woodwork.

But Rovers finally hit the front 16 minutes from time when Graham raced to the touchline and laid the ball back on a plate for Dack to tap in his seventh of the season.

However, Jack Rodwell's foul on Lolley gave Grabban a shot at redemption in the 80th minute and he took it, perfectly placing in the penalty for his fourth of the season.

Forest pressed for a late winner, but David Raya tipped over a rasping Lolley drive late on, as the points were shared.

Tony Mowbray: "Huge frustration really. I think we all feel really hard done by, by the penalty decision.

"Let's be honest, the referee had a really difficult game right from the start of the match in my opinion. He bamboozled both sets of fans, both benches with some of his decisions."

Aitor Karanka: "When you sign a player [like Grabban], you know his ability, quality and you know his character

"You know a player that has scored almost 20 goals every year, is a strong character. For sure, he (Grabban) will have other tests like today, and he will score more goals."