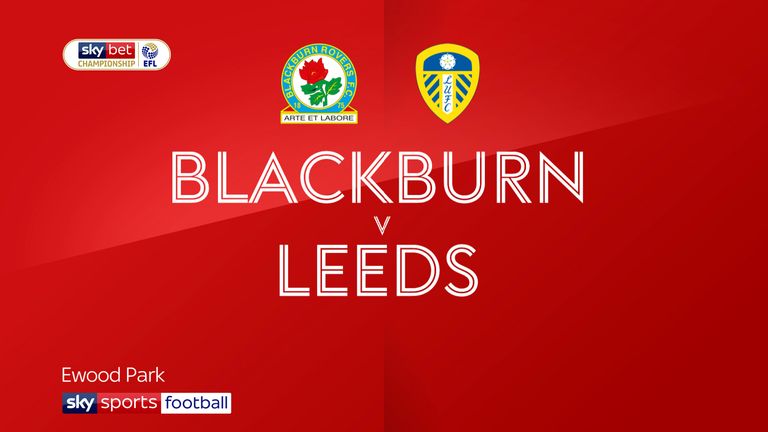 Highlights of the Sky Bet Championship match between Blackburn Rovers and Leeds United.

Leeds outclassed Blackburn to take another step towards their long-awaited Premier League return as a 3-1 victory at Ewood Park put them four points clear at the top of the Championship.

First-half goals from Patrick Bamford and Kalvin Phillips put Leeds in control of an exciting contest, which saw both sides hit the post in a frantic opening 45 minutes.

And though Adam Armstrong's free-kick briefly got Rovers back in it early in the second half, Mateusz Klich needed only five minutes to restore Leeds' two-goal advantage as they cruised to victory.

West Brom can cut the gap at the top when they host Hull on Sunday, but with Leeds six points clear of third-placed Brentford with five games left to play, they are on course to make it back to the top flight for the first time since 2004.

But it was a third defeat in a row for Blackburn, whose play-off hopes are fading rapidly as they sit six points off sixth place.

Marcelo Bielsa came out of a midweek draw with Luton ruing Leeds' wastefulness in front of goal, but Bamford made no mistake with the first opening here.

Blackburn were complaining about the way Klich dispossessed Lewis Travis, but as the Pole rolled the ball through Bamford fired it beyond the reach of Christian Walton just seven minutes in.

Rovers responded well and should have levelled within minutes. Armstrong's pass put Sam Gallagher clean through on goal, but he rolled a shot the wrong side of the post with Illan Meslier beaten.

Blackburn lost Elliott Bennett to an injury 20 minutes in, with the experienced Stewart Downing sent on to fill the troublesome left-back spot.

But Leeds were reasserting some control and hit the post themselves in the 27th minute when Bamford shrugged off his man but saw his shot bounce back off the left-hand upright.

Luke Ayling met Barry Douglas' 37th-minute corner at the near post to test the reactions of Walton, who got down well to block.

But the goalkeeper could do nothing three minutes later as Phillips found the top left-hand corner with a fine free-kick, his first goal since October doubling Leeds' lead.

Phillips was then guilty of conceding a needless free-kick less than two minutes into the second half and it proved costly as Armstrong curled the ball beyond the reach of Meslier.

But Leeds needed only five minutes to restore their two-goal advantage. Jack Harrison saw his shot blocked as he cut in from the right, but the ball fell for Klich and his effort found a way through the crowded area.

This time there would be no route back into the game for Blackburn as Leeds kept the pressure on.

It could and probably should have got worse with 15 minutes to go, when Walton was lucky to avoid red after coming out of his area to foul Bamford, but the Rovers keeper was booked, staying on to make a smart save from Douglas' free-kick.

Blackburn's Tony Mowbray: "I think we made a game of it in the first half particularly. Obviously we missed a one-on-one and hit the post and they scored at strange times, just as we were getting back in the game...

"They come with an attitude that they believe they're going to win football matches. They've got very good players and they spend a lot of time in your box. I think their right-back was in our box 100 times today, but I don't think the gap was massive."

Leeds' Marcelo Bielsa: "[Klich] played a great match today. He was the player who balanced the whole team. It was very difficult to imagine which kind of match we were going to have.

"The opponent was playing with different shapes today, and they made some modifications we didn't expect with (Sam Gallagher) on the right, (Joe Rothwell) on the left and (Armstrong) as the centre forward. That was new today."