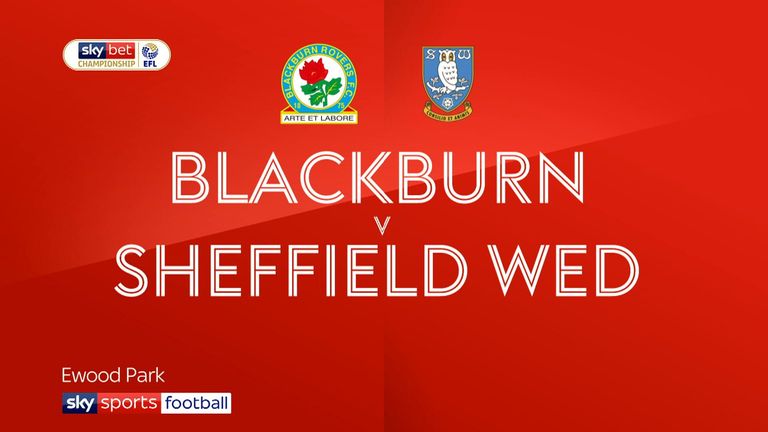 Danny Graham celebrated his 100th league start for Blackburn with a hat-trick as Rovers brushed aside Sheffield Wednesday 4-2 at Ewood Park.

The striker hammered home his first goal in the 11th minute from a rebound, and Bradley Dack's 11th of the season eight minutes after the break seemed to put Blackburn on their way to a comfortable win.

But former Rovers loanee Lucas Joao's thunderbolt pegged the hosts back. Graham though, got his second of the afternoon from another rebound soon after.

An unfortunate David Raya own goal promised a nervy finish but Graham's eighth of the season completed his hat-trick and ended Blackburn's two-match losing run in the Sky Bet Championship.

It was a perfect end to the week for Tony Mowbray but the prospects look bleaker for Owls boss Jos Luhukay, whose fans called for his removal after a dismal performance which was the club's sixth defeat in their last eight games.

Rovers should have taken the lead in the eighth minute when Craig Conway's cross found Harrison Reed on the right, but his volley struck the post.

However the visitors went ahead three minutes later when Dack saw his low drive brilliantly saved, only for Graham to be on hand to hammer home the rebound.

The visitors fell further behind in the 53rd minute when Graham broke down the right and his inch-perfect cross was slotted home by Dack, prompting anger from the visiting fans about their beleaguered boss.

Any thoughts of Rovers running away with the contest were ended by a ferocious strike from Joao, whose thunderous 30-yard effort flew past Raya and in off the underside of the crossbar for his sixth goal of the season.

Rovers restored their two-goal cushion four minutes later when Dack saw his rasping low drive hit the post - but Graham was on hand to tap home the rebound.

To their credit, Wednesday fought back and gave Blackburn a scare five minutes from time when Barry Bannan raced through and, although his delicate effort hit the post, Raya bundled the ball into his own net.

Fittingly though, Graham had the final word in the last minute, completing his hat-trick after Dack squared to give the forward an easy finish.

Tony Mowbray: "Graham with his finishing, with his composure in the box amongst bodies to clinically hit the target when he needs to.

"It's great that Bradley has the technique to hit the target, hit the post, or make the goalkeeper work. So many players lash things and they go into the crowd.

"We've got some quality at the top end of the pitch and it was evident today."

Jos Luhukay: "The expectations in this club are high. We are now not living in the past, and fans maybe live in the past from the success, but last season it was also a direction where it was not good enough.

"That's why I came in January and now we sit in the same situation so we must fight against that, and we must believe that we can take us to a better period."