Report and highlights from the Sky Bet Championship clash between Blackburn Rovers and Sheffield Wednesday at Ewood Park as Adam Reach puts the Owls in front but Joe Rothwell earns a draw for the home side. 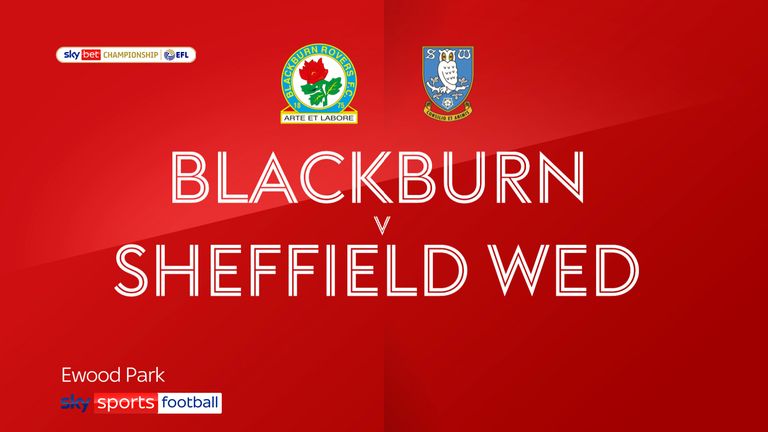 Highlights of the Sky Bet Championship match between Blackburn and Sheffield Wednesday.

The midfielder collected the ball 40 yards from goal in the 76th minute and weaved into the area before slotting home, cancelling out a stunning 41st-minute strike by Adam Reach.

Both sides will be frustrated with a result that could have gone either way. Blackburn struck a post through Adam Armstrong, while Reach and Josh Windass both passed up good opportunities.

Tony Pulis' side looked much more comfortable before a chaotic end to the game, which played into the hands of the hosts' quick attackers.

But Rovers could not find a winner and are now five points off the top six. The Owls are three points adrift in the bottom three but ended a run of three successive away defeats.

Rovers made one change from the defeat at Stoke, replacing Tom Trybull with Daniel Ayala, while Pulis made two alterations from the Owls' win against Coventry, handing starts to Moses Odubajo and Joost Van Aken.

The game quickly settled into its default pattern of Wednesday sitting back and inviting Rovers to break them down, which yielded a solitary tame Armstrong effort early on.

Despite enjoying the lion's share of possession, Blackburn could not fashion anything meaningful and fell behind to a strike of real quality four minutes before half-time.

It came from nothing, as Barry Douglas' headed clearance hit Ayala and fell to Reach 30 yards out. He had plenty to do but measured a beautiful left-foot strike into the top-left corner for his second goal this season.

Another defensive lapse just after the break presented Windass with another opportunity but his initial effort was blocked and then his shot on the turn went wide.

Wednesday grew in confidence and should perhaps have extended their lead when Barry Bannan combined with Reach but the latter dragged wide after pouncing on another Douglas error.

Rovers rang the changes and it gave them extra impetus. The width of a post denied Armstrong after a smart turn and shot but the hosts equalised 14 minutes from time thanks to a special goal by Rothwell.

He carried the ball 40 yards, surging past the Owls defence before calmly passing the ball beyond Keiren Westwood from 12 yards.

It opened the game up and Armstrong was denied at the end of a lightning counter-attack moments later, when Westwood parried his effort.

At the other end, Blackburn were almost caught cold with a quick free-kick but Ayala's heroic intervention deflected Windass' shot over.

Armstrong had another sight of goal towards the end but saw his shot deflected just wide, and Rovers will see it as two points dropped.

Blackburn's Tony Mowbray: "For me, we handed it to him (Reach) on a plate really didn't we? It wasn't dangerous, it wasn't an attack as such, it was miscommunication between defenders who should have been in control. In their defence, it hasn't been a very consistent backline. Bradley Johnson played centre-half last week. It's not easy to be out two to three weeks and come back into the intensity with a manager on the sidelines trying to drive you.

"It's not as if we have had weeks and weeks of working on our back four because they haven't been fit. Daniel (Ayala) was thrown in again having been injured on crutches a week ago. I don't want to be too harsh on them. It's not as if we've conceded loads of chances and the keeper is making save after save. And yet they are all tight games. We have not been as clinical as early season and teams have been more defensive-minded against us."

Sheffield Wednesday's Tony Pulis: "Ever since I've come into the football club, the players have been giving everything they've got. They worked really hard today against a good Blackburn team, who've got good players and are always a threat. They play very open and expansive.

"Overall, you would have taken a point before the game. But then, that's the fifth time this year, and I've only been here 10 games, where we've been winning and not seen it out, which is a real concern in lots of ways. We've had chances at the other end to make it two, and that finishes the game."