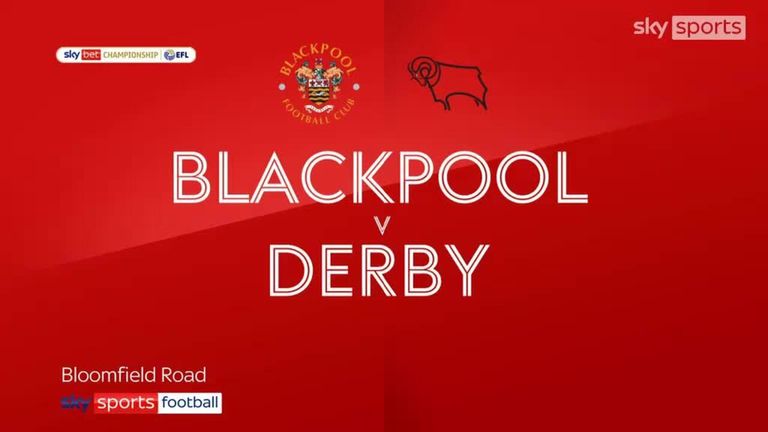 Highlights of the Sky Bet Championship game between Blackpool and Derby.

Derby put on a show for their travelling fans as they beat Blackpool 2-0 at Bloomfield Road.

More than 4,000 County fans made the trip for the club's final away game of the Championship season.

And Wayne Rooney's relegated side got the job done as they ended a streak of nine consecutive losses on the road.

The Rams, who had not won on their travels in 2022, snatched the lead against the run of play through Malcolm Ebiowei's strike 15 minutes from time and then doubled their advantage through an Eiran Cashin header - the pair's first senior goals.

Despite being spurred on by a vocal and celebratory travelling support, it was the hosts who started the brighter.

Callum Connolly had a sight at goal inside five minutes when he met a Charlie Kirk corner, but his strike was wide of the target.

Returning goalkeeper Kelle Roos, making a first start since November, then produced an impressive instinctive save to prevent the lively Kirk from opening the scoring.

Blackpool's promise looked destined to be rewarded when an oblivious Festy Ebosele was penalised for bringing down the onrushing James Husband in the area.

However, Gary Madine's spot-kick was saved well by Roos to keep the scoreline level.

The unflustered Tangerines continued their dominance despite the setback, with Kirk firing a CJ Hamilton cutback wide from a promising position.

An influential Kirk then turned provider, firing an enticing delivery into the area where an advancing Shayne Lavery was unfortunate not to convert.

Derby gradually grew into the games and could have snatched an unlikely lead before the interval after finishing the half strongly.

Luke Plange first tried his luck from outside the area before a guided Louie Watson effort dropped narrowly beyond a post, much to the relief of a scampering Blackpool keeper Chris Maxwell.

After the restart Neil Critchley's side returned to the ascendency, with Kirk again going close with a delicate effort which drifted narrowly wide of a post.

Roos further justified his return when he got down quickly to stop a Luke Garbutt shot that was redirected dangerously by Madine.

A constant serenading from the travelling Rams faithful was rewarded as Ebiowei stabbed home from close range when Maxwell failed to hold a Louie Sibley strike.

And Ebiowei then turned provider with eight minutes of normal time to go, floating a delightful delivery into the area where an unmarked Cashin headed in a second.

Blackpool's Neil Critchley: "When you've got a crowd like we did, you want to give them a day to remember with some goals and a win. Unfortunately, we've not been able to do that, but it doesn't change my opinion of the season as a whole - we've had a very good season.

"It maybe epitomised our season; we were the better team, on top, but didn't take our chances and the two goals we conceded were really poor."

"I'm delighted with the win, but performance-wise we can play better than that. It's a funny game, football, there have been much better performances away from home and we have come away with nothing.