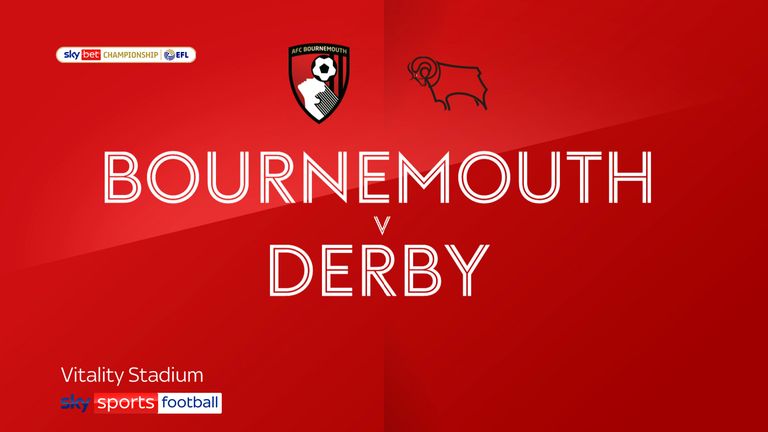 Highlights of the Sky Bet Championship match between Bournemouth and Derby.

Bournemouth preserved the English Football League's only unbeaten record thanks to a late goal from on-loan Atletico Madrid youngster Rodrigo Riquelme to secure a 1-1 draw with a spirited Derby.

The 20-year-old came off the bench and scored a side-footed volley with almost his first touch, connecting with Diego Rico's deep cross in the 81st minute.

It was tough on the away side, for whom Wayne Rooney was returning for the first time following a period of self-isolation after coming into contact with a friend diagnosed with Covid-19.

Rooney was influential early on and helped to put them in front as his free-kick bounced down off the wall to Graeme Shinnie, who scored via a deflection off Steve Cook with 14 minutes gone.

The Rams were deserving of their lead, with Martyn Waghorn and Matthew Clarke having already spurned good chances to score prior to the opener.

The Cherries offered little in the first half, with their only chance of note coming right on half-time when David Marshall saved superbly from Dominic Solanke at close range after Junior Stanislas had pulled the ball back.

Jason Tindall brought on Josh King at half-time, with the striker having been unable to secure a move away from Bournemouth in the summer.

The home side improved and top scorer Arnaut Danjuma twice came close to an equaliser in the space of a minute. First he struck the post after collecting Lewis Cook's pass and then he was denied by Marshall's firm save at the near post.

Derby were proving resilient, happy to sit deep and soak up the pressure. Their only chance came when Asmir Begovic was called upon to beat away Jason Knight's 25-yard effort.

They looked well capable of holding out before Riquelme found space on the right edge of the area and side-footed home a volley from Rico's cross.

Reports suggest that Sheikh Khaled bin Zayed Al Nehayan is in advanced talks to take over at Derby and there has been much recent speculation about the future of manager Phillip Cocu after the club's poor start to the season.

They fought admirably here and were incredibly unfortunate not to have restored their lead when Lee Buchanan smashed a shot past Begovic only for the ball to strike a defender on the line and rebound to safety.

During the five minutes added on, King was then presented with a chance to win it for Bournemouth but fired wide as he swivelled to volley at goal.

This could yet prove a valuable point for the Cherries in their quest for promotion and it leaves them third, five points off the top.

Bournemouth's Jason Tindall: "I was very disappointed with our first-half performance but I felt we got our reward for the second-half performance. I don't think we were calm enough on the ball. I think we made some poor decisions. They came here not to lose the game and to be fair to them they did that really well.

"It's great that nine games in we're still unbeaten because I think that's difficult for any team to achieve."

Derby's Phillip Cocu: "I'm totally not focused on that side of the club [the reported takeover by Sheikh Khaled bin Zayed Al Nehayan]. I'm focused on football. There is always pressure. Pressure in the media, from fans, but also from ourselves."