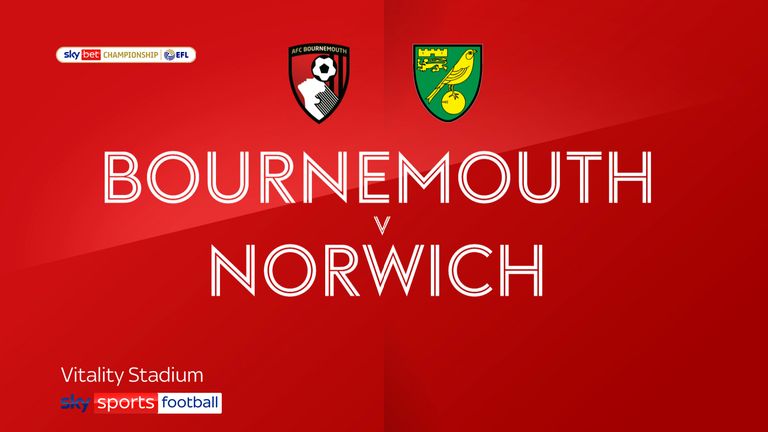 Highlights from the Sky Bet Championship match between Bournemouth and Norwich

Arnaut Danjuma’s first-half solo goal earned Bournemouth a 1-0 win over Norwich as the Cherries made it seven points from their opening three games since relegation from the Premier League.

There was little between the two sides but a second goal of the season for Danjuma 10 minutes before half-time was enough to give Jason Tindall's side the edge in this Sky Bet Championship contest.

Both teams showed attacking intent early on and quick passing in the area allowed Dominic Solanke a powerful shot at goal which well saved by Tim Krul.

Moments later Onel Hernandez came off the right flank and fired Norwich's first shot on target, which was beaten away by Asmir Begovic.

Bournemouth came close again on the half-hour mark when Jack Stacey's header was turned behind by Krul after Philip Billing's cross had picked him out at the far post.

Two minutes later, the Cherries made the decisive breakthrough when Stacey's pass was collected by Danjuma and the Dutch forward turned sharply before scoring with a low shot into the bottom right-hand corner from 20 yards out.

The Canaries were struggling to find a way through Tindall's well-organised outfit but almost did so when former Hoffenheim midfielder Lukas Rupp shot powerfully from the edge of the area initiating a superb flying save from Begovic.

Norwich were sharper after the break and had strong claims for a penalty waved away when Adam Smith appeared to clip Max Aarons as he latched onto Oliver Skipp's long pass.

Aarons, the subject of recent interest from Barcelona, then combined well with Hernandez down the right to with the latter's low cross just evading the outstretched boot of Teemu Pukki.

Solanke then missed a good chance to extend Bournemouth's lead as he headed over when well placed after more good work from Danjuma.

It was Solanke's last action as manager Tindall replaced him with Josh King for the closing stages.

It is the first time King has featured this season as speculation linking him with a move away from the club persists with a week left of the transfer window.

Norwich were again appealing for a penalty when the ball bounced up and seemed to strike Steve Cook's upper arm.

Daniel Farke brought on Jordan Hugill and Adam Idah in the closing stages as he pushed for the equaliser but Bournemouth defended resolutely to see the game out and secure a valuable victory over a side with similar promotion ambitions.

Bournemouth manager Jason Tindall said: "It was a lovely goal from Arnie. He's that type of player who can produce a goal from nothing.

"I think it's really important to get off to a good start, especially when you're a team that's just got relegated from the Premier League and you're a little bit down - so to beat one of our rivals is fantastic.

"I got a message from David Brooks late last night on my phone saying that he's got feverish symptoms. The doctor went round to his house to check him and unfortunately he was unable to play. The doctor did test him (for Covid-19) and as of yet we haven't had the results back."

Norwich manager Daniel Farke said: "There were two penalty decisions against us. Last season we were blaming VAR but today I was wishing to have it back to be honest.

"The first feeling is definitely to be disappointed but it was definitely one of our best performances of the season. We'll definitely take lots of encouragement out of this game."