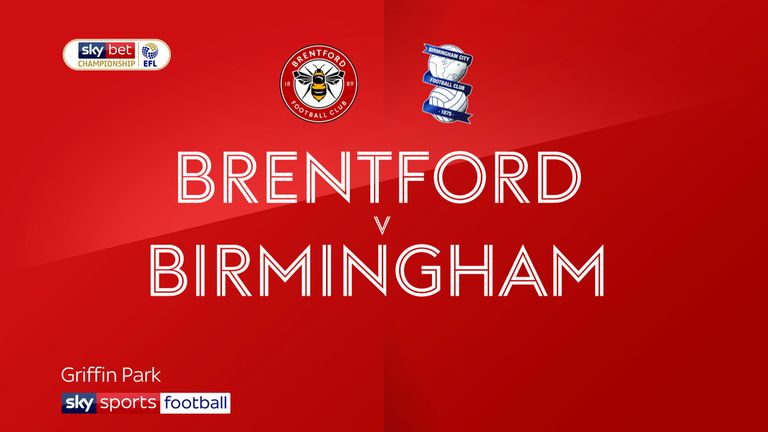 Highlights of the Sky Bet Championship match between Brentford and Birmingham City.

Birmingham got their Sky Bet Championship campaign off to a winning start with a 1-0 smash-and-grab victory at Brentford.

Blues clinched the points after Kristian Pedersen capitalised on some sloppy marking to loop a header over Bees keeper David Raya at the far post with 19 minutes gone.

It was the only effort on goal in the entire game from Pep Clotet's men, who sat back and defended brilliantly against a lacklustre Brentford side to record their first opening day away win for 21 years.

And when Brentford did breach the visitors' resolute defence, led by former Bee Harlee Dean, Blues were saved by a combination of the woodwork - which Brentford hit three times before the break - and keeper Lee Camp.

Brentford, missing last season's top scorer Neal Maupay after he was left out of the squad amid interest from a string of Premier League clubs, were wasteful in front of goal and lacked invention to open up the Birmingham rearguard.

In a bright opening Ollie Watkins came closest to breaking the deadlock for the hosts after 15 minutes, but his turn and shot cannoned to safety off the bar with Camp nowhere.

Brentford could have been four up by the break, but a mixture of poor finishing and Camp's heroics saw City keep their clean sheet intact.

Emiliano Marcondes was next to go close for the Londoners when he latched onto a superb low Henrik Dalsgaard cross only to smash his first-time effort against the bar when it looked easier to score.

The sucker-punch came when a quickly-taken free-kick caught the Bees defence napping and Pedersen lofted a superbly-placed header over Raya and just under the bar.

Brentford stormed back and Marcondes forced Camp into a superb save before Watkins again went close when he cut in from the left only to blast an angled drive against the outside of the post.

Spanish winger Sergi Canos was a thorn in the Blues' side early on, but twice flashed low drives past the far post.

After the break, Blues relied on the counter-attack but failed to test Raya once as Brentford grew more and more desperate for a foothold in the game.

Canos saw a header tipped wide by Camp just after the hour-mark before Ethan Pinnock arrowed a header just past the upright from the resulting corner.

Brentford threw on substitute Marcus Forss late on and the switch to a traditional centre-forward almost brought instant rewards when his header was deflected wide by Marc Roberts.

The youngster came close at the death but his deflected effort on the turn looped off Dean and into the grateful arms of Camp as Brentford's curtain-raiser ended in frustration.

Thomas Frank: "That was quite frustrating. We outplayed them and outbattled them, created four major chances and they did nothing. We had 13 shots, they had one and our keeper hardly touched the ball.

"I hate losing home games but for me that was one of the best first-half performances in a long time."

Pep Clotet: "It was a very well organised performance but we wanted a better display than the one we had, but I don't take away from the effort of the players.

"We didn't manage to challenge Brentford for possession and from the first minute we found it difficult to close a few gaps they were creating. They had great chances but unfortunately for them and fortunately for us they didn't go in."