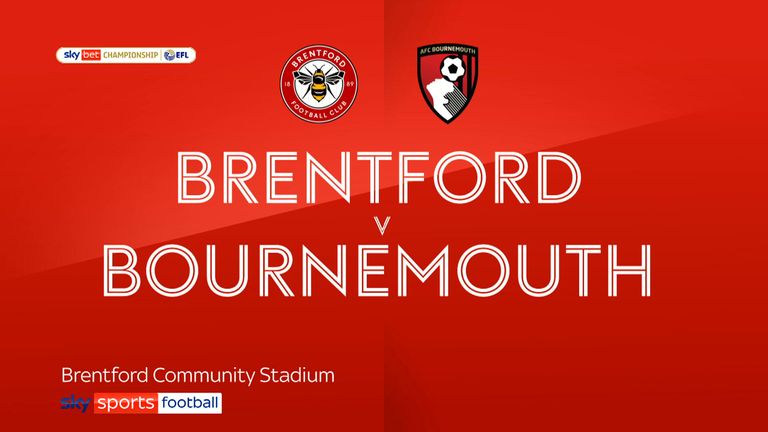 Highlights of the Sky Bet Championship match between Brentford and Bournemouth

Brentford strengthened their bid for promotion from the Sky Bet Championship after an important 2-1 win over Bournemouth at the Brentford Community Stadium.

Dominic Solanke - who was denied the opening goal within seconds of kick-off - gave Bournemouth the lead their energetic start deserved (25), before a powerful header from Henrik Dalsgaard restored parity in west London at the break (37).

There was a noticeably lower tempo approach from both sides after the break, but it was Thomas Frank's men who managed to force a late winner when winger Bryan Mbeumo located substitute Tariqe Fosu, who headed in from close range (79).

Brentford move above Swansea - who were held by Reading later in the evening - into second after their 16th game in all competitions without defeat, while the Cherries sit fourth, with a game in hand on many teams around them.

With their Boxing Day clash with Millwall called off due to a Covid-19 outbreak at The Den, Bournemouth had a break of 11 days between their draw with Luton on December 19 and the trip to the capital - and they looked greatly reinvigorated as a result.

Within 40 seconds of the first whistle, they almost made it count, when Solanke hooked a shot goalwards from Jefferson Lerma's through ball that looked destined to trickle over the line before Bees skipper Pontus Jansson recovered to clear on the line.

Brentford responded well, with Sergi Canos recording their best chance of the half when he dragged inches wide of the right-hand post, but Solanke netted the opener when he connected with Lloyd Kelly's awkward delivery from the left to fire past David Raya and into the roof of the net.

🐝 Brentford are now unbeaten in their last 15 games (8 wins, 7 draws) - the longest unbeaten run in @SkyBetChamp since Fulham's run of 23 games in 2017-18 promotion season pic.twitter.com/072YFDeO4K

Several smart stops from Asmir Begovic had prevented the hosts scoring but the goalkeeper was denied a fifth straight clean sheet when right-back Dalsgaard leapt to meet Mathias Jensen's corner and power home a deserved equaliser.

The two sides matched each other for the majority of a low-key second half, but with 11 minutes to play, Mbeumo carved space for himself in the area with some smart footwork and looped a cross to the far post, where Fosu headed in.

There was even time for Jensen to try and extend the Bees' lead in stoppage-time, but Begovic was again forced into action when the Dane struck goalwards after Ivan Toney's square ball.

Brentford's Thomas Frank: "We might have gone 15 games unbeaten, but we are humble and we rely on togetherness because no team in the world will achieve anything if they are not together. This group of players have been together for one-and-a-half years now. They had a fantastic season last time and were unlucky, but they are more experienced now individually and as a group and it shows in their performances."

"Bournemouth were quick, moved the ball well and pressed us and we couldn't get in the game, but we showed solidity and stability and grew into it. We knew it would be a good and tight game between two good sides. I said at half-time that we needed to show more character and attitude if we wanted to win a game like this. After half-time we showed that - they even changed their system, so it was a good way to end the year."

Bournemouth's Jason Tindall: "We were very good and created some excellent opportunities but we didn't take the ones we had and got punished for the two defensive errors we made - that was the difference.

"It was really disappointing because we've been good defensively and for large parts we were tonight. We conceded from a corner for the first time this season and the second goal was unlike us, and that's what is frustrating."

Man of the match - Mathias Jensen

"He was outstanding. He did the simple things well and, with the level of quality on the football pitch, he shone in terms of his technical ability. A brilliant performance."

Both sides are next in action on Saturday, January 2. Brentford host Bristol City at the Brentford Community Stadium at 3pm, while Bournemouth travel to the bet365 Stadium to face Stoke at 7.45pm, live on Sky Sports Football.