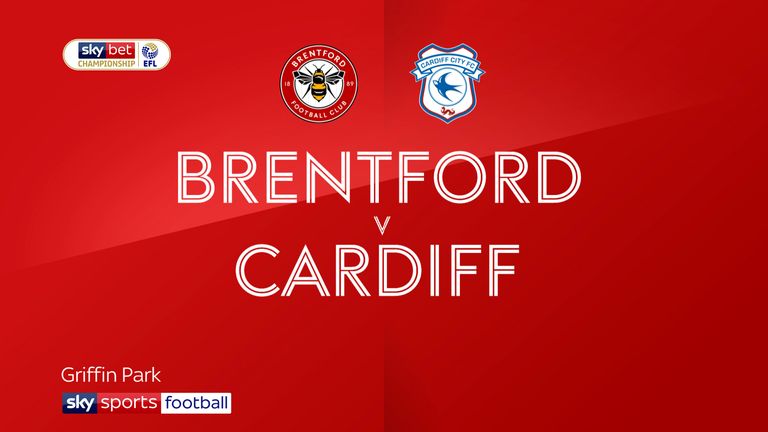 Highlights of the Sky Bet Championship match between Brentford and Cardiff City.

Brentford moved to within a point of the play-off places with a hard-fought 2-1 win over Cardiff.

Bryan Mbeumo gave the Bees the lead with a cool first-half finish and Ollie Watkins headed in a second shortly after the restart, before Marlon Pack's piledriver gave the Bluebirds hope.

Brentford flew out of the traps and Josh Dasilva flashed a low effort just past the upright inside the first 60 seconds.

Cardiff looked neat and tidy and posed an aerial challenge at the other end, and Leandro Bacuna reminded the hosts of their attacking threat with a snapshot that fizzed just over moments before Brentford took the lead.

Said Benrahma was the architect with a sublime turn and through ball into the path of a perfectly-timed run from Mbeumo who slipped it home.

It should have been two midway through the half when Mathias Jensen raced onto a slick interchange between himself, Dasilva and Watkins only to shoot straight at goalkeeper Neil Etheridge.

Benrahma was causing Neil Harris' side all sorts of problems down the left, but it was Rico Henry who should have stretched the Bees' lead just after the half-hour.

He burst onto a neat one-two with Benrahma and raced towards goal, but snatched at his shot which only troubled the side-netting.

Top scorer Watkins should have given his side a two-goal cushion just before the break when he pounced as Etheridge could only parry Benrahma's dipping drive into his path, but blazed over from close range.

Cardiff played very narrow and always looked to counter quickly, but were hampered by the loss of Junior Hoilett early on with what looked like a hamstring pull.

Watkins stretched Brentford's lead a minute after the break with his 13th goal of the season - a neat glancing header at the near post from Mbeumo's right-wing cross.

After extending their lead, Brentford took their foot off the gas but only after Benrahma's curling effort was palmed wide by Etheridge after 52 minutes.

Mbeumo went close with a similar curling effort before Henry found the side-netting again with a far-post half-volley from Jensen's pinpoint cross.

But with the Bees coasting, Cardiff hit back strongly and forced the Londoners into a flurry of errors.

Substitute Josh Murphy went close with a clever dipping drive from the edge of the box before Pack's strike boosted their confidence further.

It was a superb goal straight from the training ground, Lee Tomlin squaring his free-kick for the midfielder to rifle home from distance to give Bees goalkeeper David Raya no chance.

Brentford were on the ropes, and with Cardiff winning most first and second balls, had to endure an aerial bombardment.

Aden Flint wasted a gilt-edged chance to equalise when the ball dropped to him in a melee but he fired agonisingly wide with 20 minutes to go.

Tomlin saw a tricky low drive that bounced just in front of him saved by Raya and then saw a dipping volley tipped over by the Spanish keeper a minute from time.

In the end, Brentford clung on for the points to inflict Harris' first defeat in five games in charge of the Bluebirds.

Brentford's Thomas Frank: "The first 30 minutes was the type of football we want to see here, moving the ball quickly, and dynamic. We said at half-time that we needed to go for the second goal and kill the game, but when they scored I didn't like it.

"I want us to be cool, make more passes and don't stress, but we weren't. Despite that, I need to praise my players for digging in and putting bodies on the line. We showed massive desire."

Cardiff's Neil Harris: "We can't give teams a head start or give them a foothold or you will get punished against good players. I knew I'd find out more about my players tonight because Brentford are one of the best home sides in the division at a tight ground, a proper old-fashioned ground.

"They can play, but this season they can go direct as well. There has been a softness about us, so I knew I would find out a lot about my lads tonight."