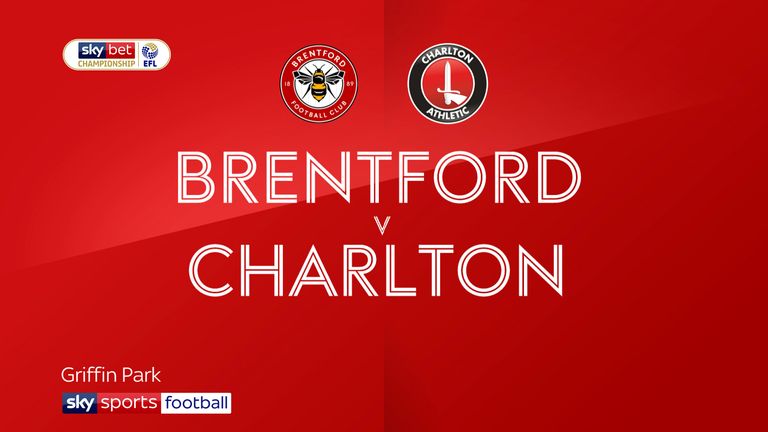 Highlights of the Sky Bet Championship match between Brentford and Charlton

Brentford needed late goals from Said Benrahma and Ethan Pinnock to beat Charlton 2-1 and crank up the pressure on West Brom in the race for automatic promotion.

Lowly Charlton led through an early goal from Macauley Bonne, but Benrahma levelled from the penalty spot before Pinnock headed the winner five minutes from time.

It was by no means a vintage display but nonetheless Brentford have once again cut the gap to the second-placed Baggies, who play Derby on Wednesday evening, to just two points.

Brentford had not conceded a goal in their previous five matches but it took Charlton just seven minutes after Jonny Williams broke down the left and fed Alfie Doughty.

Doughty's cross was headed goalwards by Jake Forster-Caskey and Bonne got in front of Bees 'keeper David Raya to guide the ball home.

Brentford looked to hit straight back and Rico Henry's cross found Mathias Jensen, whose far-post header was tipped over by Dillon Phillips.

The Bees had a double let-off after Charlton, who still need a few more points to guarantee their survival, rattled the woodwork twice from a corner.

Raya pushed Josh Cullen's cross onto his own crossbar and from the rebound Jason Pearce's volley clipped the bar.

Before the interval Benrahma, Saturday's hat-trick hero against Wigan, twice worked himself into space on the left of Charlton's penalty area, but was inches off target on both occasions.

Early in the second half, Josh Dasilva took aim from the edge of the Addicks' box but he too curled his shot a whisker too high.

Benrahma saw his drive held by Phillips before Dasliva played a neat one-two with Emiliano Marcondes and drew a sharp save from the Charlton 'keeper from his angled shot.

Brentford got back on level terms in the 74th minute when Benrahma latched onto a Dasilva cut-back in the area and tripped over the outstretched leg of Cullen.

Benrahma confidently dispatched the spot-kick beyond the dive of Phillips for his fourth goal in four days.

The Bees began peppering the Charlton goal and Phillips saved twice from Benrahma before Dasilva's 20-yard effort came back off the far post.

But when Dasilva looped another cross into the box, Pinnock got his head to it to steer home the ball and keep West Brom on their toes for a little longer yet.

Brentford's Thomas Frank: "This is a massive win. I just had a feeling because of all the circumstances of this game it would be difficult. Charlton are a good side and they fighting for their lives. They are well structured. This win was big in terms of how we managed it and how we kept going.

"It would be easy to say it was just a matter of time before that winner went in, but I was still extremely happy when it did. It's most important what we do, but I will probably watch West Brom vs Derby tomorrow night."

Charlton's Lee Bowyer: "I think, looking at the situation we are in, we have to fight for every point but if we keep performing like that and showing that fighting spirit we'll get over the line.

"Brentford have been hammering teams left right and centre, both before and after the lockdown, and we gave them quite a scare. Tonight wasn't meant to be."