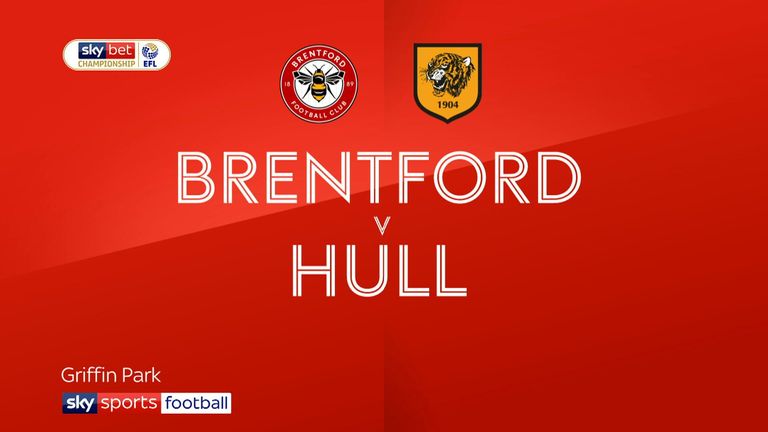 Highlights of the Sky Bet Championship game between Brentford and Hull.

Said Benrahma struck a hat-trick as Brentford come from behind to coast to a 5-1 victory over Hull at Griffin Park.

Kamil Grosicki had a great chance to give the visitors the lead after 10 minutes but his volleyed effort at the far post flew narrowly over the angle.

Campbell then rose unmarked in the box to power home Grosicki's left-wing cross after 24 minutes to put Hull ahead.

The goal sparked the Bees into life and they hit back within five minutes when Mokotjo passed into the bottom corner from the edge of the box after a quick turn and pass from Benrahma.

Maupay then had a great chance but drilled his effort just wide of the far upright.

Benrahma had the ball on a string and put the hosts ahead just after the half hour with a dribble past three Tigers defenders that ended with a curled finish into the top corner.

Hull, who started the game so brightly and at a high tempo, were rocking and it was no surprise when the Londoners extended their lead, Maupay squaring from the byline for Benrahma to clip the ball past the keeper.

Like the first half, Hull started much the brighter after the break and only a save from largely untroubled Brentford keeper Daniel Bentley denied Goebel Evandro's long-range effort straight from the re-start.

Brentford then made it four, Ollie Watkins bursting clear down the right only to see his shot blocked by Marshall, before he headed back across goal where the waiting Maupay tapped home from close range.

It was all Brentford now and Maupay and Yoann Barbet both had chances to add to the scoreline, only point-blank Marshall saves keeping the rampant Bees at bay.

Benrahma claimed the match ball with another superb finish with nine minutes remaining when he curled the ball nonchalantly into the top corner from just inside the box.

Thomas Frank: "When [Benrahma] plays like that he is a joy to watch. He's exciting every time he gets the ball because he can create something out of nothing. It is like magic and very few teams in this league have that.

"His finishing has got better and better but his assists are also incredible. His run and pass for Kamohelo Mokotjo made that the most beautiful goal of the day for me. He is growing more and more composed and when he runs at defences he is terrifying because he can go left or right."

Nigel Adkins: We started really well for the first 25 minutes, changed our shape because we know how good Brentford are with possession - but we were assertive and on the front foot and always wanted to intercept.

"We knew their front three are very dangerous and wanted to be aggressive, and we scored an excellent first goal. But then we allowed them to get back in the game and our midfield did not track - and we go in at 3-1 down disappointed with the manner of the goals we conceded."