Report and highlights from the Sky Bet Championship clash between Brentford and QPR at the Brentford Community Stadium as Ivan Toney's 12th goal of the season secured victory for Thomas Frank's men, who move up to fourth as a result. 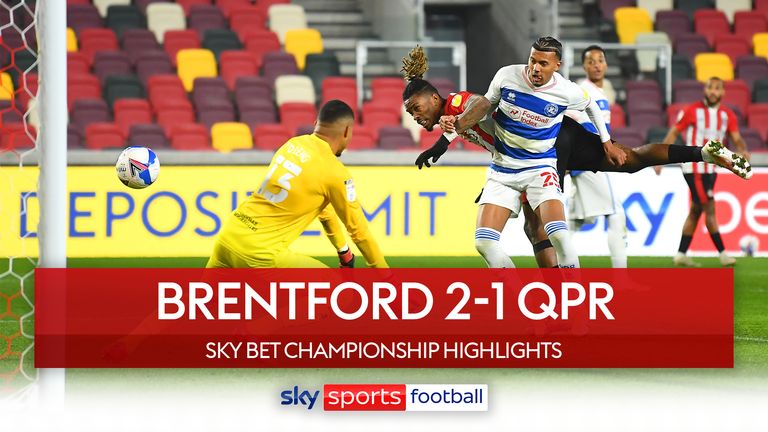 Highlights of the Sky Bet Championship match between Brentford and QPR

Vitaly Janelt's first goal since a summer move from German outfit VfL Bochum put the Bees ahead (14), before Lyndon Dykes converted a pinpoint cross from Bright Osayi-Samuel to level the game (26).

Toney then continued his incredible goalscoring run to seal victory with a near-post header midway through the second half (64) - his 12th goal of the season - before Rangers were reduced to 10 men when Todd Kane picked up his second booking (83).

Brentford stretch their unbeaten run to seven and move up to fourth as a result, while Mark Warburton's men stay 13th, with 17 points on the board.

Having lost four of the last five meetings between the two fierce rivals, QPR were itching to set the record straight and they started on the front foot, dominating possession and putting the Bees backline under pressure.

Yet, against the run of play, Brentford took the lead. Toney's flicked header found Rico Henry, who squared the ball for midfielder Janelt to tuck a fizzing low drive beyond the reach of Seny Dieng and into the bottom right corner.

A careless pass from Dieng almost allowed Emiliano Marcondes to add a second within moments, but 12 minutes after the opener, Rangers pulled one back in style, when Osayi-Samuel charged down the right flank and located Dykes, who finished with aplomb.

Shortly before the break, Mads Bech Sorensen bundled Dykes to the deck mere inches outside of the area and escaped with just a booking, despite passionate protests from the Rangers players and staff alike that the challenge warranted a dismissal.

Toney thought he had restored the Bees' lead when he turned home a Bryan Mbeumo cross first time, only to be denied by the offside flag, but just after the hour mark, he added to his tally for the season when he edged ahead of his marker to nod Marcondes' whipped free-kick over the line.

Inside the final 10 minutes of the game, Kane was dismissed after picking up a second yellow card for a foul on substitute Marcus Forss, who missed the chance to put the game beyond doubt late on when he thundered a shot over the bar after Toney's lay-off.

Man of the match - Ivan Toney

For the second game in succession, Toney netted the winning goal for Brentford and outlined just how good a job he has done at replacing the goals scored by Ollie Watkins last season with a clinical finish.

Not only that, he made a valuable contribution when tracking back and could, quite easily, have chalked up several assists, displaying the development of his all-round game. 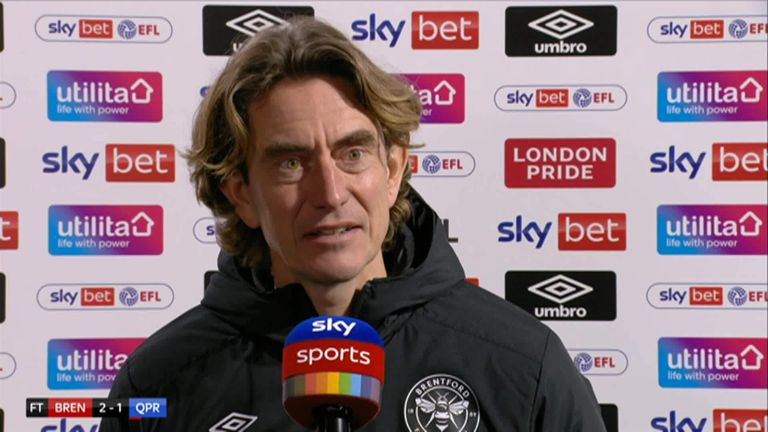 Brentford's Thomas Frank reflects on the Bees' 2-1 win over west London rivals QPR and says he was proud of his players after their hard-working attitude.

"Do we want to play outstanding, beautiful football in 46 matches? Yes. Will that happen? No. It doesn't happen in a normal season and in a different season, definitely not. You need to dig out a win like this. Great win." 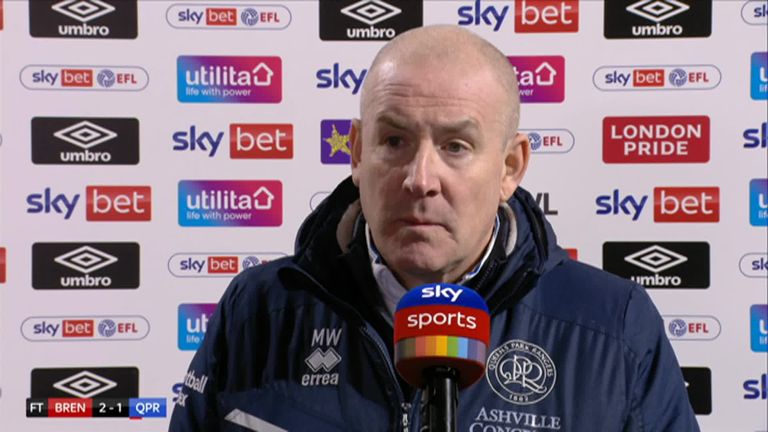 QPR boss Mark Warburton says he was disappointed that Brentford's Mads Bech Sorensen wasn't sent off after he fouled Lyndon Dykes and was the last man, during Brentford's 2-1 win over QPR

QPR's Mark Warburton: "We conceded a soft goal after 14 minutes, responded so well and scored a tremendous goal, but please explain how a foul is given and he is the last man. It's too important a decision, at this level of the game, to get so blatantly wrong. We're bemused by that decision; a major turning point in the game.

"I think we played well for long stages of the game. We created chances and showed tonight that we can come to so-called tough venues and deliver good performances. I've just said to the players that they deserved more from that game than they got for a variety of reasons. A little bit more belief and we can be a good side."

Both sides are in next in action on Tuesday December 1. QPR host Bristol City at the Kiyan Prince Foundation Stadium at 7.45pm, while Brentford travel to the New York Stadium to face Rotherham at 8pm. Both fixtures will be available to watch live on Sky Sports Red Button.