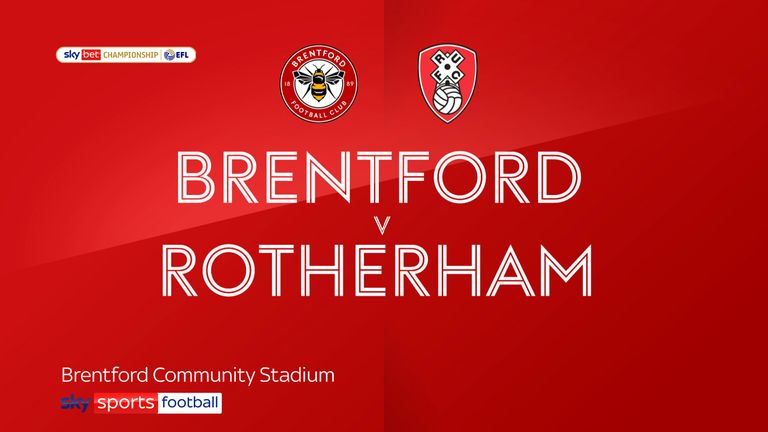 Highlights of the Sky Bet Championship match between Brentford and Rotherham.

Rotherham missed the chance to move to within a point of safety, as they were beaten 1-0 by play-off bound Brentford in their penultimate game in hand on Tuesday.

The only goal of the game came after 26 minutes at the Brentford Community Stadium, as Bryan Mbeumo - whose goal earned the Bees a 1-0 win over Bournemouth on Saturday - headed Sergi Canos' cross home.

Following their fifth straight defeat, Paul Warne's men stay 22nd in the table, with 39 points from their 43 games so far, and remain four points behind Wayne Rooney's Derby in the relative safety of 21st.

Brentford, meanwhile, lead Bournemouth, Barnsley and Swansea by four points and stay in pole position to finish third with two games to play.

How Rotherham's survival bid took another

In spite of the fact they were playing their ninth and final game of a punishingly congested April, the Millers made an energetic start in west London. Michael Smith and Richard Wood both headed wide of the right-hand post, while Lewis Wing's free-kick flew across the penalty area crying out for a killer touch that never came.

While the chances were less than clear-cut, the hosts soon punished their opponents. Canos cut in off the left flank, beat Wes Harding and clipped in a delightful cross that Mbeumo glanced past Jamal Blackman for his second goal in as many games.

The Championship's top scorer Ivan Toney had drawn a blank in his previous three games, as the wait to break Glenn Murray's record of 30 in a season continued, and in the dying second of the first half, he chased down Emiliano Marcondes' neat flick and crashed a shot off the right-hand post.

He turned his head in disbelief with an hour on the clock. Mads Roerslev's cross from the right presented him with a free header at goal, albeit from the penalty spot, and though he generated an impressive amount of power, Blackman reacted quickly to bat the ball away from danger.

Later, Millers substitute Kieran Sadlier's thumping shot took a deflection on its way to David Raya's grasp, while at the other end Marcus Forss dallied and dragged a shot wide.

Warne's cries for his players to continue digging in grew increasingly desperate as the time ticked by and though they did follow his orders, there was little threat of a crucial reply as they fell to a familiar defeat by a one-goal margin.

Brentford's Thomas Frank: "It's important that we build momentum at this stage of the season and it was a hard-earned win. We are starting to see new relationships grow on the pitch at just the right time. We lost three key players in Josh Dasilva, Rico Henry and Henrik Dalsgaard so we've had to adjust and the run we are on shows we are doing that."

"Both years we have deserved more if you look at the statistics and numbers, but this is football and it is the small margins that decide things in the end. We don't want to be a great football team - we want to be incredibly lucky. This win wasn't easy. We had to fight and for the first 25 minutes we couldn't get control of the game, but one bit of class and brilliance from Sergi Canos and Bryan Mbeumo with the header changes the game."

Rotherham's Paul Warne: "The lads are exhausted, the schedule has caught up with us but we will keep going. On another day we might have nicked one at the end. It is absolutely exhausting and I don't know how the players players are doing it.

"We have a small squad and I'm exhausted myself. It feels like we've played a quarter of a season in a month and the sad thing is, if you are winning every week you feel a million dollars but when you lose you lick your wounds and they get deeper."

Man of the match - Sergi Canos

It was an impressive night at wing-back for the Spaniard, who was a threat on the left flank and created the only goal of the game with a driving run in from the left and a teasing cross that left Mbeumo with little work.

Both teams are next in action at 3pm on Saturday, May 1. Brentford host already-promoted Watford at the Brentford Community Stadium, while Rotherham welcome Blackburn to the New York Stadium.