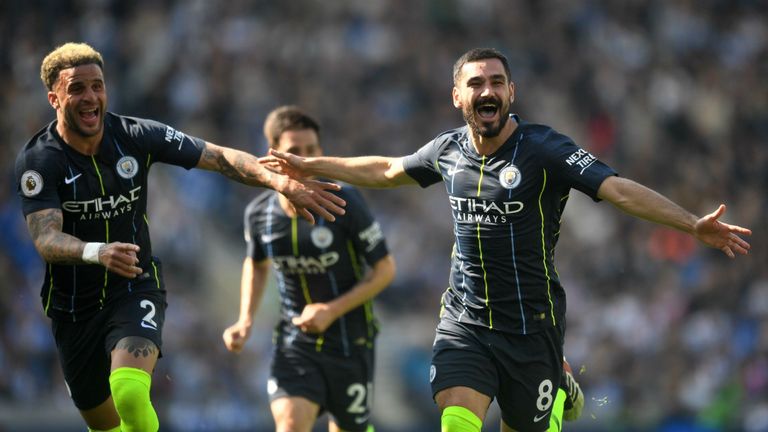 Highlights from Manchester City's win over Brighton in the Premier League.

Manchester City came from behind to retain the Premier League title in style with a 4-1 victory at Brighton on the final day of the season.

City looked on course for a nerve-jangling final outing at the Amex Stadium when Sadio Mane's opener for Liverpool against Wolves - which temporarily moved the Reds top of the table - was compounded by Glenn Murray heading Brighton into the lead on 27 minutes.

City's 14th consecutive league victory sees them end one of the most remarkable Premier League title races on top of the pile with 98 points, and sees them become the first side since 2009 to retain the title.

Man of the Match: Riyad Mahrez.

Brighton relished the prospect of going against the script to potentially crash City's coronation. Alireza Jahanbakhsh flashed a fierce drive inches wide of goal on nine minutes, an effort which forced Guardiola to squat in his technical area as the pressure mounted.

News of Mane's opener on 17 minutes at Anfield trickled through, and the plot thickened 10 minutes later as Murray beat Ederson at the near post to head Brighton in front with his 14th goal of the season.

But the lead was short-lived. David Silva's neat flick was brought under control by Aguero, and he immediately eased the champions' nerves with a clinical finish past Mat Ryan.

The Brighton goalkeeper prevented Bernardo Silva from heading a now-rampant City into the lead on the half-hour mark, but he was helpless seven minutes before the interval as Laporte was given the freedom of the penalty area and completed the turnaround with a header from Mahrez's corner.

City laid siege to the Brighton goal early in the second half and got the two-goal cushion they desired as Mahrez shifted the ball away from Lewis Dunk and fired through the despairing dive of Ryan.

And City's celebrations were put into motion on 72 minutes when Gundogan left Ryan with no chance as he curled a sumptuous 25-yard free-kick over the Brighton wall and into the top corner. 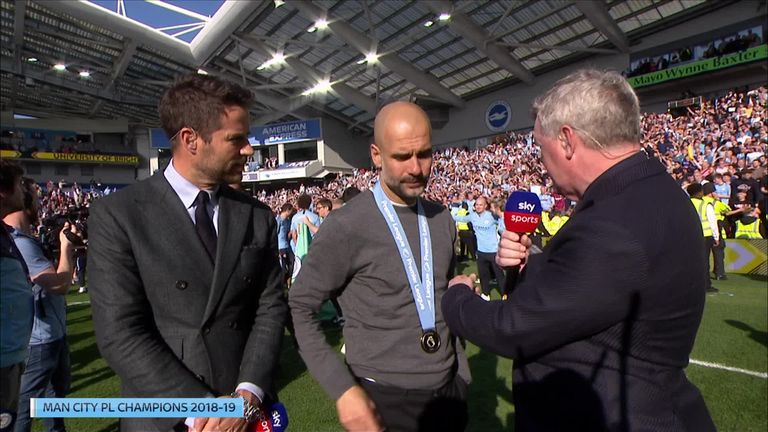 Pep Guardiola says the reality of retaining the Premier League title is incredible and praised his side for an amazing season.

Pep Guardiola: "I have to say congratulations to Liverpool of course. Thank you so much. They helped to push us and to increase our standards from last season. To compete against this team pushed us to do what we have done. It's incredible, 198 points in two seasons to go back-to-back. We made the standard higher last season and Liverpool helped us - to win this title we had to win 14 in a row. We couldn't lose one point. It's the toughest title we have won in all my career, by far." 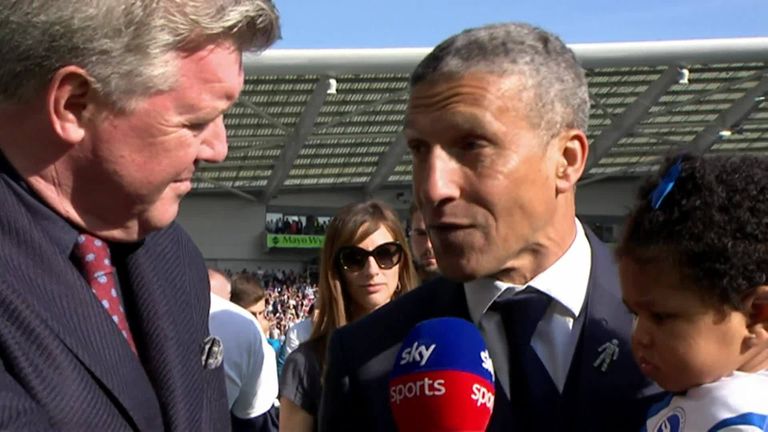 Brighton manager Chris Hughton says he couldn't have asked for more effort from his side as they fell to a 4-1 defeat against Manchester City.

Chris Hughton: "For a good period of the game, we were able to give them a good game and that's what I wanted, but the fact their equaliser was so quick after our goal, that really hurt us."

Man of the Match - Riyad Mahrez

Having opened the door to Liverpool in the title race with his missed penalty at Anfield in October, Mahrez made amends with the goal which kick-started the Manchester City titles celebrations on the south coast. It was fitting and just finale to the Algerian's first season with City as he secured his second Premier League winners' medal.

Manchester City can complete an unprecedented domestic treble with victory over Watford in the FA Cup final on Saturday, May 18 (Kick-off 5pm BST).