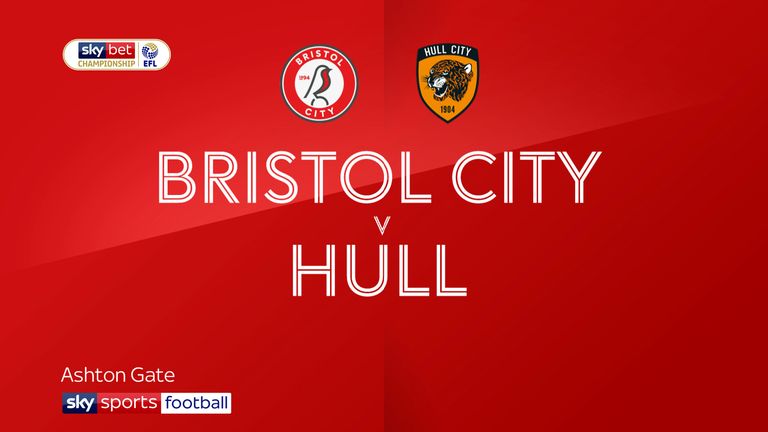 Highlights from the Sky Bet Championship game between Bristol City and Hull City.

The hosts took a 41st-minute lead when Paterson's first-time pass into the box found Diedhiou unmarked. The striker was given time and space to control the ball and slot it past George Long.

Paterson doubled the advantage after 53 minutes with a superb right-footed free-kick from 30 yards that went in off the crossbar after Diedhiou had been fouled.

Hull skipper Jordy De Wijs cut the deficit with a 60th-minute glancing header from George Honeyman's free-kick on the left.

But the Robins held on for their first win in 10 games, condemning their opponents to a place in the Sky Bet Championship's bottom three with just four games left.

The home side had a setback in the first minute when centre-back Nathan Baker suffered what appeared to be a head injury and had to be replaced by Zak Vyner after lengthy treatment.

Bristol City had the first efforts at goal, Nahki Wells shooting over and Paterson seeing an effort blocked. But Hull responded and Scott had a fierce drive deflected out for a corner.

Neither side could exert much control before Diedhiou made the breakthrough to give the hosts a lead they barely deserved.

During 10 minutes of first-half stoppage time, Mallik Wilks fired over for Hull, but it was one of few goal threats from either team before the break.

Bristol City might have gone two up five minutes into the second half when Wells broke clear down the left and cut inside only to see his low shot well saved by Long.

After Paterson's goal, Long had to make another fine stop to keep out a Diedhiou volley. At the other end Tom Eaves, one of two half-time substitutes for Hull, had a shot deflected just wide.

Reece Burke headed over for Hull moments after McCann had made his third change, sending on Josh Bowler for Scott.

De Wijs breathed new life into the Tigers with his goal, and appeals for a penalty when Wilks went down were unanswered by referee Gavin Ward.

Goalkeeper Dan Bentley protected Bristol City's lead with a fine diving save from Wilks' low drive, while at the other end Andreas Weimann shot wide when well placed.

Bentley did well again to keep out a Bowler volley as Hull pressed for a late equaliser, but their efforts proved in vain.

Bristol City caretaker Dean Holden: "While I would like a shot at management at some point in my career, my only thought now is to put smiles on the faces of our supporters. It is not about me at the moment. It is about ending the season as strongly as possible. I wanted the players to perform with freedom tonight and they have come up with two great goals.

"Now it is on to the next training session and a long trip to Middlesbrough. I am not thinking beyond that at the moment. We needed a win to end a poor run. I asked the players to go out and play as if it was the first game of the season."

Hull's Grant McCann: "The players are giving everything. We are fighting for our lives, but we need to be better defensively. Performances since lockdown have been so much better. We have more players fit and have been in every game.

"We cannot dwell on this result because games are coming thick and fast. There is another huge one against Millwall coming up. We had chances tonight and are getting into dangerous areas. I can't fault the effort the players are putting in."