Bristol City 0-0 Watford: Goalless at Ashton Gate as both sides remain in the play-off places

Report and highlights from the Sky Bet Championship clash between Bristol City and Watford at Ashton Gate as they played out a goalless draw on Wednesday night that saw both sides remain in the play-off places. 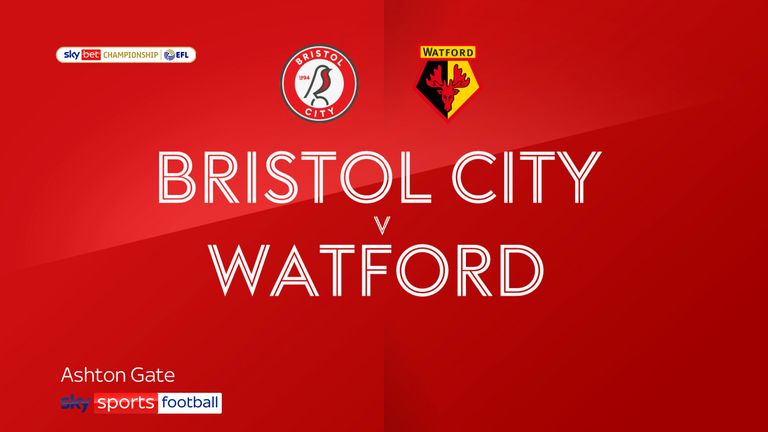 Highlights of the Sky Bet Championship match between Bristol City and Watford.

Championship high-flyers Bristol City and Watford cancelled each other out at Ashton Gate as the game ended goalless.

City goalkeeper Dan Bentley made the save of the match in the 74th minute, showing great reactions to tip over a shot from Domingos Quina.

But in the end the final pass from both teams let them down and a point apiece was about right as defences took the honours.

City head coach Dean Holden opted for a strike force of Famara Diedhiou and Semenyo, relegating Chris Martin and Nahki Wells to the bench, and brought in Taylor Moore for the injured Tomas Kalas at the back.

Watford boss Vladimir Ivic made four changes from last Saturday's 1-1 draw against QPR and set his side up with a back four for the first time this season.

The home side created the first clear chance of the game after nine minutes; Jamie Paterson's low cross from the left found Semenyo unmarked in the box, but his shot was just too high.

But soon Watford were dominating possession and forcing their opponents back. Andre Gray set up an opening for Ismaila Sarr in the 16th minute, only for his fierce drive to be deflected over by Zak Vyner.

The game settled into a pattern of City defending deep and inviting their hosts forward. Watford built with menace, without being able to penetrate.

The next good chance for either side came in the final minute of the first half when a driven free-kick into the box by James Garner deflected up towards the far post where Craig Cathcart headed wide.

Watford began the second half on the front foot again. Sarr raced into the box onto a long ball and was denied by a saving tackle from Moore.

But City almost went in front after 52 minutes when Semenyo beat a defender and delivered a superb low cross that somehow eluded Diedhiou inside the six-yard box.

Semenyo was starting to look a threat and another penetrating run ended with a shot that flashed wide of the far post.

Watford were not heeding the warnings. With City enjoying much more of the ball, Semenyo latched onto a volleyed cross from Jack Hunt and sent a header just over the bar.

Ivic was sufficiently concerned to send on Troy Deeney for Gray in a bid to even up the balance of play.

The move seemed to rejuvenate the visitors and Quina was left with head in hands as Bentley somehow kept out his effort from 12 yards.

Deeney had a late penalty appeal turned down, but Bentley seemed to take the ball cleanly as he dived at his feet.

Bristol City's Dean Holden: "That is only one goal conceded in four games now. Watford had more of the ball in the first half, but I told my players at the break to keep faith with the structure we had put in place. I knew that if we stayed solid, we would create chances and we had some good ones in the second half.

"Antoine Semenyo is a real handful and I wouldn't like to defend against him because he can go past you on either side. With a bit of luck, he would have scored or set up a goal. It was a good point in the circumstances and we can approach another big game at Reading on Saturday with confidence."

Watford's Vladimir Ivic: "That was a big chance and we deserved to score because we were on top in the game for long periods. For the first 60 minutes we controlled the tempo of the match, but couldn't find the final pass to make our efforts count. Between the 60th and 80th minutes we lost that control and allowed them to create some chances.

"But overall it was a much better performance than in recent games and I was happy with the attitude of the team and the way they played. We were up against strong opponents and if you cannot win, it is very important not to lose, especially to teams close to you in the table. I always want to win games, but we will take a point and move on."