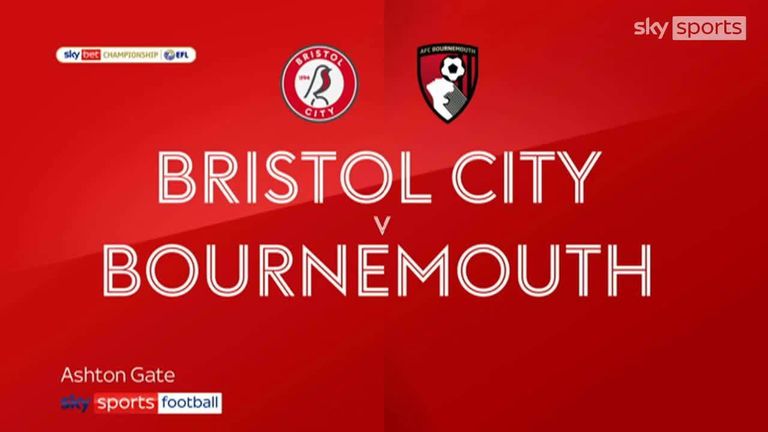 Jamal Lowe netted his first goal for the Cherries, connecting with a sweet volley from Jack Stacey's right-wing cross in the 21st minute and Zemura doubled the advantage on the stroke of half-time, making space inside the box to strike a thunderous left-footed drive from an angle and finding the top corner.

The result extended City's run without a home victory to 16 games, a sequence stretching back to January. They were comprehensively outplayed for much of the game.

Bournemouth made the early running, helped by an injury to City midfielder Joe Williams, whose career has been blighted by fitness problems since he arrived in Bristol.

He pulled up off the ball and was clearly distraught as he left the field and was replaced by Nahki Wells in the 14th minute.

In celebrating his goal, Lowe held up the number seven shirt of Bournemouth player David Brooks, for whom there was a minute's applause from both sets of fans in the seventh minute as he is beginning treatment for stage two Hodgkin lymphoma.

It was no surprise that the goal came from a move down the right when Bournemouth's Stacey and Lowe were running riot.

City had to wait until the 37th minute for a clear chance, with Wells volleying over a Callum O'Dowda cross from close range.

At the other end, Dominic Solanke headed over as Bournemouth continued to attack with menace.

Gary Cahill was booked for ending a rare City raid with a foul on O'Dowda, but Zemura's wonderstrike confirmed Bournemouth's first-half dominance and the home side left the pitch to jeers from their supporters.

City boss Nigel Pearson made a change at half-time, sending on Jay Dasilva for O'Dowda, but soon Bournemouth were piling on the pressure again, Dan Bentley saving from Stacey and Ryan Christie.

Bentley's goal was starting to resemble a shooting gallery as City's feeble resistance saw their defence breached repeatedly, the ball flashing across the six-yard box on numerous occasions with no final touch.

The hosts finally came to life on the hour, Wells just failing to connect with Cameron Pring's downward header and Dasilva having a shot blocked.

City were reduced to 10 men when, having used their three substitutes, midfielder Andy King was forced to leave the field in the 73rd minute.

All Bournemouth's slick football lacked was another decisive finish as they peppered Bentley's goal, but they were almost rattled when Chris Martin got on the end of a Wells cross only to head tamely at Mark Travers.

By the final whistle, jubilant Cherries fans were chanting, 'We are top of the league'. On this form, they may well stay there.

Bristol City's Nigel Pearson: "We were outplayed by the best team we have faced this season. I have no complaints, even though I think we could have played better ourselves. I also give Bournemouth a lot of credit for that.

"We could have done more to prevent their goals, especially the second one, which came from our set-piece where we had two opportunities to put the ball back in the box. On a day when it was always going to be difficult against really good opponents, we gave ourselves a few problems."

Bournemouth's Scott Parker: "I know it is a cliche, but that win was for David. He is a loved and liked boy in this team and the lads showed exactly what he means to them. No matter what colours you wear or who you support, football has a knack of uniting people in difficult moments and the respect Bristol's fans showed to David was touching.

"It was a superb performance. We were fantastic in every aspect of our game and, with no disrespect to City, should have won by more goals. Our team ultimately has a foundation defensively and it is another clean sheet away from home. The whole side looked a solid unit."