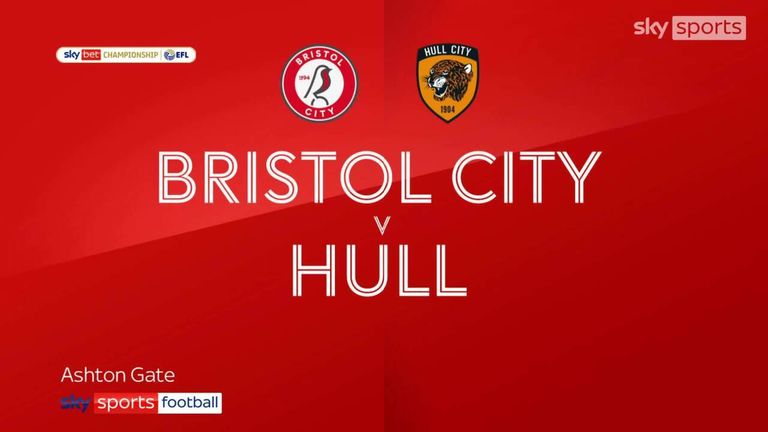 Highlights of the Sky Bet Championship match between Bristol City and Hull.

By the 35th minute, Andreas Weimann, Antoine Semenyo and Chris Martin had all found the back of the net, with Weimann and Martin adding further goals in the second half.

Weimann took advantage of goalkeeper Nathan Baxter's ill-judged rush towards the edge of his penalty area to shoot his 21st goal of the season after six minutes.

Semenyo doubled the advantage after 33 minutes, breaking onto Weimann's pass to shoot low past Baxter and then set up a Martin tap-in with low cross from the left to make it 3-0.

Martin won a tackle near the halfway line and broke clear to slot the fourth nine minutes after the break. And Weimann completed the scoring with an impudent chip eight minutes from time.

Both Semenyo and Weimann received standing ovations when substituted in the closing stages as Robins fans celebrated an exhilarating final home game of the season.

The hosts were almost in front after three minutes when Baxter advanced only to see Martin's header loop over him. Sean McLoughlin got back to clear the effort off the line.

The goalkeeper failed to learn his lesson and was out of position again when Weimann opened the scoring.

Hull almost levelled two minutes later when striker Tom Eaves unleashed a vicious volley from the right corner of the box, which was palmed over by Dan Bentley.

Allahyar Sayyadmanesh wriggled his way into Bristol's penalty area after 27 minutes, only to shoot over, and Keane Lewis-Potter had a firm header saved by Bentley.

But the response from the home side was swift and Martin was only just wide with a 32nd-minute volley on the turn.

The two goals in quick succession had home fans on their feet and there was a party atmosphere as half-time approached.

Within moments of the second half starting, Semenyo was in on goal again, but his shot lacked the power to beat Baxter.

Hull had made a change at the break, sending on Regan Slater for Eaves.

Brandon Fleming volleyed over as the visitors attacked the end where their travelling supporters were situated, but Martin's second goal put an end to any hopes of a revival.

Still the visitors pressed forward. Bentley had to save a curling effort from Fleming and Richard Smallwood sliced the ball badly wide when teed up by Lewis-Potter.

The hosts remained dangerous themselves and Weimann picked his spot from inside the box to set the seal on a day which saw him dominate the club's Player-of-the-Season awards.

Bristol City's Nigel Pearson: "It was important we ended the season strongly. We have played well without always getting the right result, but today everything came together.

"We are getting an identity and players coming into the side know what they have to do if they want to stay in it. I'm pleased that our fans could enjoy themselves at the end because we haven't always delivered for them at home."

Hull's Shota Arveladze: "It was a terrible game, terrible result and terrible performance. The only positive came from our supporters, who stuck behind the team until the final whistle, which was amazing.

"An apology to them is not enough. I can't find the words to say to them, except that we will try very hard to win for them next week."