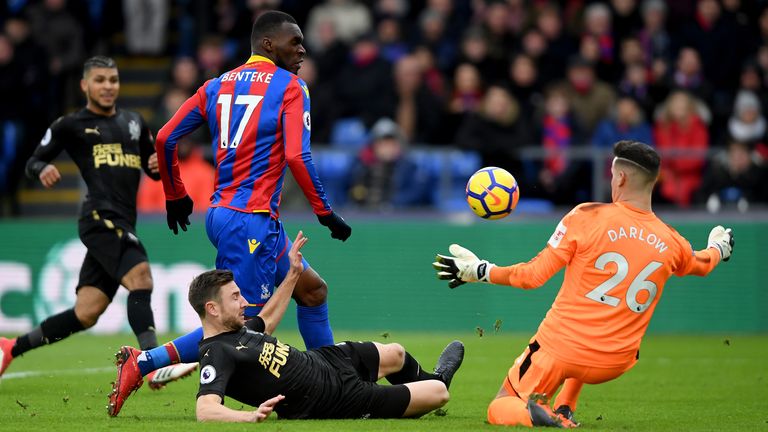 Luka Milivojevic's second-half penalty saw Crystal Palace come from behind to earn a 1-1 draw with Newcastle in the Premier League on Sunday.

The Serbian made no mistake from the spot after Christian Benteke had been fouled by Ciaran Clark on 55 minutes to cancel out Mohamed Diame's 22nd-minute opener for the visitors.

The result leaves both teams in the relegation scrap, as Newcastle remain 16th and one point above the drop zone, while Palace are two points and two places ahead of them in 14th.

Newcastle opened the scoring from a poorly-defended corner when Kenedy's low cross from the right bounced once in the six-yard box into the path of Diame, completely unmarked at the back post, and he prodded the ball into an unguarded net.

Wilfried Zaha and Benteke had earlier wasted one-on-one opportunities and Zaha had a further effort blocked by DeAndre Yedlin before Wayne Hennessey produced a brilliant double save at the other end, denying first Kenedy and then Ayoze Perez.

As the first half drew to a close, Benteke was too slow to react when Zaha's deflected shot was pushed into his path by Karl Darlow and Palace were frustrated again when Yohan Cabaye's half-volley lacked power and was held by the Newcastle goalkeeper.

However, they were presented with a route back into the game 10 minutes into the second half when Zaha crossed and Clark tugged Benteke's shirt in the six-yard box.

New signing Islam Slimani was unavailable for Newcastle with a thigh injury, but fellow Deadline Day arrival Martin Dubravka was on the bench. Crystal Palace made one change as Yohan Cabaye replaced the injured Bakary Sako. Alexander Sorloth was among the substitutes.

Referee Andre Marriner pointed to the spot and Milivojevic converted the penalty, squeezing the ball home, despite Darlow diving the right way and getting a firm hand to it.

The goal ignited the home team, but they missed a succession of chances as Benteke headed over, Andros Townsend skied a good opportunity and James McArthur failed to test Darlow with a left-footed effort from the edge of the area.

Benteke thought he had won it in the 88th minute when his header beat Darlow, but Clark made a last-ditch clearance on the line while Jonjo Shelvey was perhaps fortunate not to concede a second penalty when he tugged the shirt of McArthur as Newcastle held on to their point.

Rafa Benitez felt his side should have held a bigger lead at half time, but concedes a draw was an decent result.

Roy Hodgson (Crystal Palace): "With the way we played in the first half and coming in at half time 1-0 down, I certainly would have taken it [a draw]. After watching the second half and how we dominated as we did, creating more chances and taking the game to Newcastle for the whole 45 minutes, I feel like the team is a little bit unlucky not to have got all three points in the end, certainly the second half performance merited that."

Roy Hodgson says his side were unlucky not to beat Newcastle after missing several big opportunities.

Rafael Benitez (Newcastle): "Scoring the second goal could change everything. We didn't do it and we conceded what I would say is a soft penalty because he was pushing my player and my player was pulling. That changed everything because obviously they had more confidence and they were pushing and we know they have very good players up front."

Crystal Palace dominated the second half and can count themselves unlucky not to have taken all three points after coming from behind. Their main threat came from wide areas and the two full-backs - Timothy Fosu Mensah and Van Aanholt - were both outstanding as they provided a constant supply line to targetman Benteke. We've given the nod to Van Aanholt for producing the best pass of the match in the ninth minute, putting Benteke through and forcing a fine save from Darlow.

Palace travel to Everton in the Premier League next Saturday, while Newcastle have another date in front of the Sky Sports cameras as they host Manchester United on next week's Super Sunday.