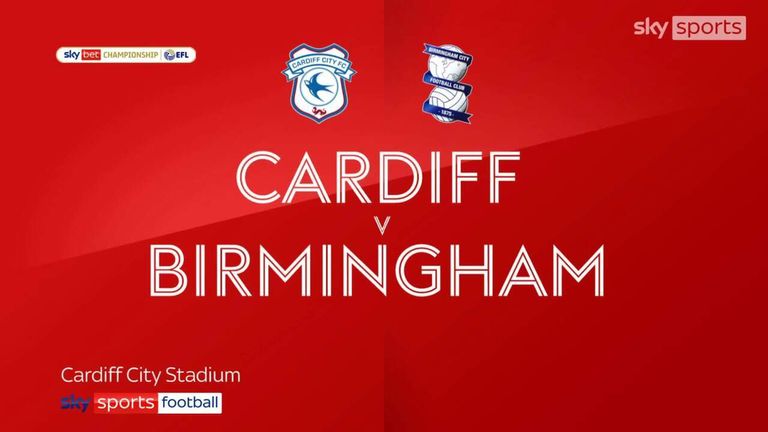 Highlights of the Sky Bet Championship match between Cardiff City and Birmingham City.

Etheridge grabbed Bluebirds substitute Max Watters around his waist to concede an 82nd-minute penalty that was then converted by Will Vaulks to cancel out Jeremie Bela's first-half goal for the visitors.

His mistake also meant the Blues have now failed to win on any of their last nine trips to the Welsh capital.

Birmingham had started positively as Juninho Bacuna exchanged passes with Lyle Taylor, but his shot was too tame to trouble home keeper Dillon Phillips unduly.

At the other end, Mark Harris scooped over the bar from eight yards after the visitors had failed to clear a Tommy Doyle corner.

More purposeful play by Bacuna then led to a chance for Onel Hernandez that again lacked the conviction to beat Phillips, while captain Gary Gardner curled over from the edge of the box.

Perry Ng went on to drag a 20-yard attempt wide for Cardiff after he had created space following a neat side-step, but it was Lee Bowyer's men who forged ahead midway through the first half courtesy of Angolan international Bela's second goal of the season.

The instigator was again Bacuna, whose smart play inside his own half and vision led to a perfectly-weighted pass to send Bela sprinting straight at Phillips.

He then showed immaculate composure to find the Cardiff keeper's bottom-left corner from 12 yards.

In response, Ng's 30-yard strike was parried by Etheridge and, after Harris retrieved the ball, the away keeper was also equal to Cody Drameh's effort from closer in.

Taylor and Hernandez, meanwhile, both called Phillips into near-post action before Etheridge was again needed to catch a curling Doyle free-kick.

On the stroke of half-time, Harris then shot wide after a forward charge to the edge of the Birmingham penalty area.

Cardiff upped their attacking intent after the restart but it was the visitors who continued to pose a greater goal threat on the counter with Gardner missing the target from two free headers in the home box - the first following Ivan Sunjic's cross and the second from a Bacuna corner.

Vaulks did warm Etheridge's hands from 20 yards after a Drameh cutback just past the hour, but Bela curled a free-kick over moments later and the Midlanders should have put the outcome beyond all doubt when Hernandez escaped Ollie Denham's attentions far too easily close to the byline - but Jordan James shot wide when presented with a free shot on goal.

Cardiff, whose starting XI boasted just 11 goals to their name in almost 250 collective appearances for the club this season, were mustering little in response until Ng's ball in from the right lured Etheridge out of his goal, and he only succeeded in hauling down Watters, whose fellow replacement Vaulks blasted the resulting penalty into the keeper's top-left corner.

Cardiff's Steve Morison: "We have people in the building who can score goals. It's just about confidence and getting in the right areas to take chances. We get into that area of the pitch by playing really good football but the top teams have the best players in that area of the pitch and we will be looking at bringing in new people to help in that respect this summer.

"We've got some good stuff done already recruitment wise and will be getting more done, but people are at clubs now so nothing can happen until June 1. Hopefully, people will be true to their word because I'm sure everybody will be pleased with the players we are bringing in."

Birmingham's Lee Bowyer: "The ball was put on a plate for young Jordan by Onel (Hernandez) but I won't be criticising him because what I saw was a 17-year-old putting himself in that situation and getting himself in the box to get that chance.

"He didn't then blast it over the bar - he was in full control and tried to do the right thing, but the ball just slid wide. It was the chance that would have put the game to bed, but we've said that so many times this season and I'm disappointed that we didn't win the game because I felt we were the better side for large periods."