Report and highlights from the Sky Bet Championship clash between Cardiff and Brentford at the Cardiff City Stadium as a Sergi Canos hat-trick steered the Bees to victory; while Will Vaulks scored twice for the Bluebirds 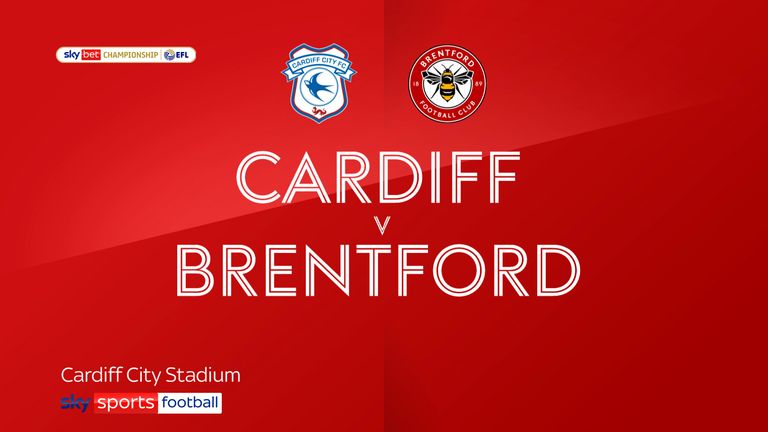 Highlights of the Sky Bet Championship match between Cardiff City and Brentford.

Sergi Canos' superb second-half hat-trick allowed Brentford to extend their unbeaten run in the Sky Bet Championship to 14 matches as they came from behind to beat Cardiff 3-2 in the Welsh capital.

The Spaniard made it a great Christmas week for the Bees as he hauled his side back from a remarkable Will Vaulks goal at the end of a lacklustre first half to earn the visitors all three points.

Hot on the heels of their 1-0 Carabao Cup triumph over Newcastle earlier in the week to set up a first major cup semi-final clash against Tottenham in the new year, the Canos-inspired comeback moved Brentford to within a point of the
second automatic promotion spot in fourth.

A cagey opening was followed by an even more frustrating contest in which there were only four shots in the first 45 minutes and neither 'keeper had to make a save.

There were flimsy penalty shouts from either side around the half-hour mark, but referee Dean Whitestone waved play on in both incidents.

It looked as though it was going to remain deadlocked up to the end of the half, but in the fourth minute of added time Vaulks lifted the game out of the mundane with an extraordinary goal.

Having picked up a loose ball just outside his own penalty area the Wales international took a touch and then played a pass forward to target man Rob Glatzel.

With his back to goal the German striker laid off the ball to his left to Vaulks who spotted David Raya some 20 yards out of his goal at the other end. Having looked up, he then put his head down and fired the ball from six yards inside his own half over the head of the stranded Brentford goalkeeper.

Brentford started the second half with a bang and after winning successive corners they managed to get back on level terms with another great bit of skill, this time from Canos.

The Spaniard got two bites of the cherry from his position just outside the home penalty area, deftly hooking his 22-yard volley over the head of Alex Smithies in the centre of the Cardiff goal.

Canos then showed off his running skills in the 65th minute as he cut inside two Cardiff defenders before firing home a low shot inside the left-hand post to give his side the lead for the first time.

Canos completed a 23-minute hat-trick not long after to give Brentford a two-goal lead at 3-1.

Vaulks gave the home side some hope moments later with his second goal of the game after Sean Morrison had header down a corner for him to volley past Raya with a little bit of assistance from the chest of Ivan Toney, but Brentford were able to hold on for the win.

Cardiff's Neil Harris: "For 49 minutes I thought we were bloody excellent. Our discipline without the ball and game plan were spot on. We contained them to next to nothing and we were comfortable in the game. We got a worldie goal from Will Vaulks and then we threw three goals into our own net - I am lost for words, really. The way we are going at the moment we are not going to make the top two. The aim at the start of the season was to make the top six and that's where we want to be.

"It grew last year and we had to close the gap and go past teams. We will go past teams this year, but you can't let teams get away from you. We have to respond against Wycombe on Tuesday and Rotherham on Saturday, because we want to build momentum and consistency. Other than winning four games in five, we haven't had any consistency all season. We have to address that quickly."

Brentford's Thomas Frank: "We were okay in the first half but then they scored a spectacular goal. After that, we moved up to another level. I didn't think they had much in the second half apart from set-pieces. They are strong and always good at set-pieces. Our attitude, hard work and togetherness was bang-on today. We really stepped up in the second half.

"As the players went out for the second half I told them we aren't going to lose the game. We played quicker, took less touches and took the throw-ins faster. We showed a lot of character - we are confident, but humble."