Highlights of the Sky Bet Championship match between Cardiff City and Bristol City.

Bristol City took the Severnside derby spoils on Friday night, as they held on to beat Cardiff 1-0 at the Cardiff City Stadium.

What proved to be the winning goal came inside 120 seconds of the first whistle, when Chris Martin tapped in Antoine Semenyo's square ball to score his first league goal since joining the Robins from Derby in September.

The last three derby meetings between these two teams had been settled by a solitary goal and there was every indication that would change when the deadlock was broken with less than two minutes on the clock.

It was a smart pass from Nahki Wells that set the wheels in motion. Jamie Paterson then rolled the ball out to Semenyo on the right, where the Robins academy product drove to the byline and cut the ball back for Martin to tap in from a few yards out.

The first half was an exhibition in efficiency from the visitors as they retained the lead while keeping their lively opponents at bay. Kieffer Moore saw a header pushed wide by Bentley, while Leandro Bacuna swivelled and forced the ex-Brentford goalkeeper to shovel a swerving effort away from danger.

Cross after cross came was delivered by left-back Joe Bennett and, on the hour mark, Harry Wilson escaped his marker to connect with one at the far post. Again, however, the Liverpool loanee was denied by a perfectly positioned Bentley.

Wilson was involved as the hosts tried to capitalise on their dominance shortly after, with the Welshman's dinked cross first evading Junior Hoilett and then being blazed well over the crossbar by Joe Ralls, who had scored three goals in his last two games.

Dean Holden introduced defender Taylor Moore and the experienced Chris Brunt to shore things up for Bristol City late on, which worked wonders as a single goal won the derby yet again.

Man of the match - Tomas Kalas

"Tonight, Kalas has not shirked any challenge whatsoever. When you are up against Kieffer Moore you've got to be physically strong and keep at it for the whole game - he's done just that." Cardiff City's Neil Harris: "I feel like I've had my wallet pinched out of my pocket, I've got to be honest! We've dominated everything tonight but with one misplaced pass in the second minute, the ball goes in our goal. We've made chance after chance, dominated possession and, in the first half, some of our football was outstanding.

"Bristol City have had one shot within 25 yards of our goal and they've scored. Ultimately, goals win games but it's a hard one to take." 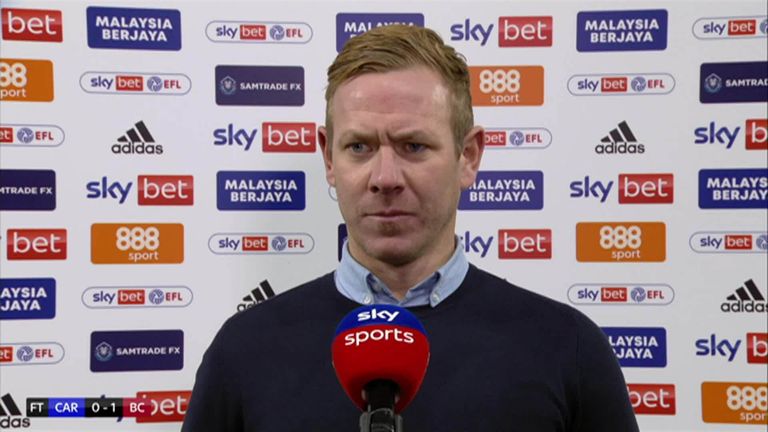 Bristol City's Dean Holden: "People started getting a bit edgy when we were on a little bit of a winless run but we've had two away games on the spin, two wins. It's an incredible team spirit that we've got and you saw that in the game. The goal was real quality - that's how we want to play - and then they were throwing balls in the box with the quality of Wilson, Ralls aiming for target men who are up there with the best in the division.

"We had to be resolute, we had to fight for everything and I'm just so proud of the performance."

Both teams are next in action at 3pm on Saturday November 21, after the conclusion of next week's international break. Cardiff travel to The Den to face Millwall, while Bristol City host Derby County at Ashton Gate.