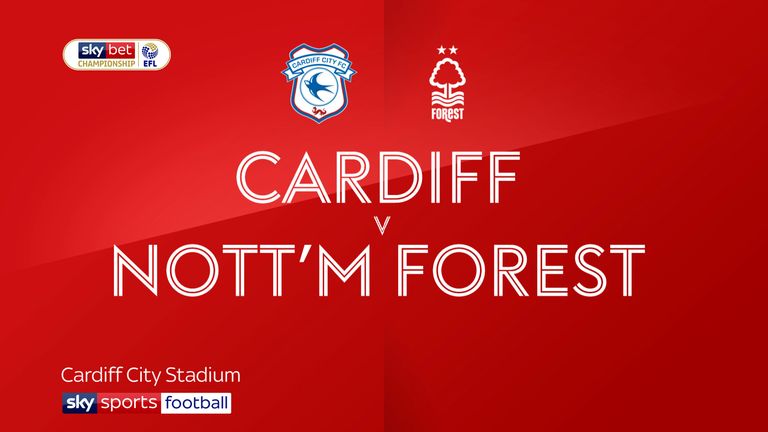 In a first half devoid of attacking intensity from both sides, Lewis Grabban had the best chance when he dragged a shot wide, before Josh Murphy had a penalty shout waved away.

Shortly after the restart, Silva connected with Grabban's cutback to give Sabri Lamouchi's side what proved to be the decider (49), handing them their first victory in 11 meetings between the two sides.

As a result, they move above Fulham into third and boast a six-point gap between themselves and seventh-placed Bristol City, while Cardiff sit 10th, six points outside the top six.

How Forest kept themselves in automatic promotion contention

The fact the two sides registered 18 shots between them in the first 45 minutes suggested a typically thrilling, high-octane Championship affair at the Cardiff City Stadium, yet that could not have been much further from the truth.

Forest's Sammy Ameobi forced two saves from goalkeeper Alex Smithies, but there was a distinct lack of quality in the final third from both. Grabban had already gone five games without a goal - a run stretching back to January 22 - and he summed up his luck when he dragged wide from a Joe Lolley cross.

Moments before the first half came to a close, Cardiff felt they should have been awarded a penalty as Josh Murphy was brought to ground by Matty Cash. Referee Stephen Martin disagreed, however, with boos ringing around the stadium as the teams left the field. 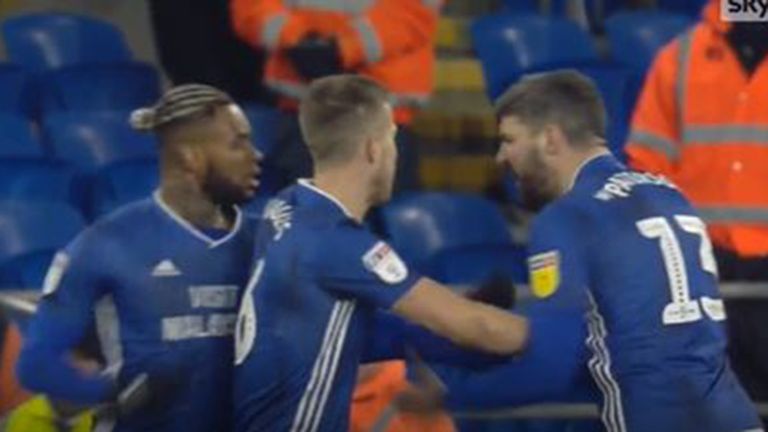 Prior to the game, both sides had scored 30 second-half goals across the season so far, and there was not long to wait for the opener after the restart. A sublime Ben Watson pass found Grabban on the right-hand side of the area and he stood up a cross that Silva diverted into the back of the net.

Neil Harris rung the changes after the 2-0 defeat to Stoke at the weekend, with Dion Sanderson, Junior Hoilett and Robert Glatzel starting in place of Jazz Richards, Danny Ward and Albert Adomah, who was ineligible to face his parent club.

Meanwhile, following the stalemate with QPR, Sabri Lamouchi made just one change, as Ryan Yates replaced Adama Diakhaby in the Forest starting line-up.

Substitute Alfa Semedo went close to forcing a decisive second when he hit a first-time shot from inside the area later on, but Joe Bennett and Smithies inadvertently - and painfully - combined to keep his fierce effort from finding its intended target.

Man of the match - Ben Watson

"You didn't stop talking all game," said David Craig as he spoke to Ben Watson after the full-time whistle. It's the sign of a real captain and the midfielder turned in a performance of the highest quality in south Wales, using his experience to free up others to move forward and provide a steely presence in the middle of the park.

Cardiff's Neil Harris: "The difference between the teams was quality in the penalty area. You look at their goal and the amount of times we got into really good areas. Did we make the wrong decisions? Probably at times and I think that's probably the difference. That's why Forest are now nine points in front of us, rather than three points. Frustrating evening.

"I've seen the footage from the angles [of the penalty appeal] and he gets nowhere near the ball. If the ball was the wrong side of the player making the attempt, he kicks Josh. The speed he's going at, he's got no option but to go over. It's a penalty."

Nottingham Forest's Sabri Lamouchi: "I'm very satisfied for the performance and the result. We scored, got three points, a clean sheet but to be honest, I think we deserved this victory. We could score one or two more with more quality in the last pass...there were a lot of duels, a lot of long balls but we made the difference and tried to control the game.

"What a game from Lewis Grabban. He worked for the team, he ran a lot and put in a fantastic ball [for the goal]. I'm just surprised about the quality, the spirit. They are not tired; they want to play, they want to fight, to run, to work hard together. Just fantastic."

Cardiff face a second successive home game as they host Brentford at the Cardiff City Stadium this Saturday at 3pm, while Nottingham Forest are back in action on Monday, March 2, when they travel to the Riverside Stadium to take on Middlesbrough, in a game live on Sky Sports Football.