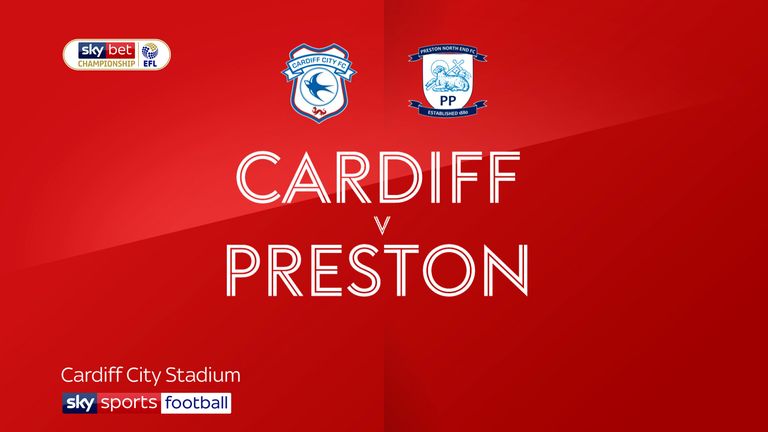 Highlights of the Sky Bet Championship match between Cardiff and Preston

Preston missed a chance to make inroads on the Championship's top two as they were held to a frustrating 0-0 draw by Cardiff at the Cardiff City Stadium.

Alex Neil's side were left to rue missed chances after Sean Maguire passed up three first-half opportunities, while Lee Tomlin was responsible for the Bluebirds' best chance when he struck wide from the edge of the area.

In the end, there were just four shots on target throughout the 90 minutes - three of which came from the visitors - but there was a distinct lack of cutting edge from both sides as the game finished goalless.

How Cardiff and Preston cancelled each other out

In spite of the fact there was the chance for both sides to cement their place in the promotion picture with a win at the start of the hectic festive period, it took quite some time for the game to warm up in South Wales.

Still, twice in five first-half minutes, Maguire fired into the side-netting. After a neat pass from Alan Browne he blazed a shot the wrong side of the post, and shortly afterwards he headed a deep cross from Billy Bodin just wide, this time on the left-hand side.

Bodin then registered the first shot on target, when he bore down on goal and forced a smart low save from Neil Etheridge in the home goal. But Tomlin spurned an even better chance at the other end when he dragged his effort inches wide after Leandro Bacuna's enterprising foray forward.

Neil Harris brought on Gary Madine and Danny Ward in place of ineffective pair Josh Murphy and Robert Glatzel in a bid to ignite the Bluebirds' attack, but few chances followed.

Preston boss Alex Neil made two changes of his own, as Tom Clarke and Tom Barkhuizen came in for Darnell Fisher and David Nugent.

Cardiff almost fell behind when Browne was presented with a gilt-edged chance after a careless pass by Curtis Nelson, but he side-footed into the grateful arms of Etheridge.

Ben Pearson orchestrated play for North End in the final few minutes and forced a strong save himself, before Tomlin tested Declan Rudd with a lob in stoppage-time, but neither side could force a winner.

Cardiff's Neil Harris: "It was not the most exciting game, not the excitement we have been used to anyway. In some ways I am pleased, because we got a clean sheet and looked relatively reliable… but we lacked creativity.

"Credit goes to Preston. But we weren't good enough in possession today. I wouldn't say I am grateful for a point, there wasn't much in it, but Preston look a well-oiled ship after two years with Alex Neil."

Preston's Alex Neil: "Everybody who watched the game would have recognised we were far the better team, Cardiff didn't have a shot on target. We had great opportunities, we dominated the game, had more of the ball and better chances, it was just that final bit.

"If you don't get the first goal against Cardiff, it's very difficult to break them down. That first goal makes them chase the game and you can create things off the back of that. I'm pleased with how we played but disappointed we didn't win because we've played worse than that this year and still won."

Man of the match - Ben Pearson

Often maligned for the robust nature of his game, it is sometimes forgotten just how good a midfielder Pearson is. His passing accuracy was excellent, while his attacking influence also shone through late on.

Both sides are next in action on Boxing Day, when Cardiff host Millwall and Preston travel to Leeds, in a game which is live on Sky Sports Football at 5.15pm.