Gareth Bale continued his swift change in fortunes at Real Madrid by starting his side's first game of the season at Celta Vigo - and inspiring Zinedine Zidane's men to a 3-1 win.

The Welshman looked set to leave the Bernabeu after being effectively told he had no future in pre-season, and came close to landing a lucrative move to China.

But Bale was surprisingly preferred over Lucas Vazquez for Real’s trip to the Balaidos, and responded by setting up the opening goal for team-mate Karim Benzema.

Real rode their luck in the early stages and had Luka Modric sent off in the 54th minute, but goals from Toni Kroos and substitute Vazquez wrapped up victory before Sebastian Losada's late consolation.

Bale needed just 11 minutes to make his point to Zidane as he squared for Benzema, who tapped in despite Celta protests over an alleged foul by Casemiro in the build-up.

Casemiro then made a crucial interception to maintain Real's lead on the half-hour, diverting the ball away from Borja Fernandez who looked almost certain to grab the equaliser.

Modric saw a fine effort well saved by Ruben Blanco, and the Celta keeper also reacted well to keep out a fierce drive from Bale before controversy erupted on the stroke of half-time.

Celta thought they had equalised through Brais Mendez after a goalmouth scramble in which Iago Aspas looked to have been fouled, but a subsequent VAR review saw the effort narrowly ruled out for offside.

Aspas continued to threaten early in the second half and Real's lead looked distinctly fragile when Modric was issued a straight red card after 54 minutes for tripping Denis Suarez.

Instead Zidane's side responded superbly, with Benzema bringing another good save out of Blanco before Kroos extended Real's lead with a crashing effort off the underside of the bar on the hour mark.

Bale's effective contribution came to an end when he was replaced by Isco in the 75th minute, and it remains to be seen whether he has done enough to maintain Zidane's favour.

Vazquez made it 3-0 just six minutes after replacing Vinicius Junior by drifting in past two defenders and firing an unstoppable shot past Blanco.

Real continued to cruise towards victory but the home side got the goal their performance deserved in the dying seconds when Losada swept a shot across Thibaut Courtois from a tight angle.

There had been plenty of speculation about Bale's future over the summer and with the La Liga transfer window open until September 2, Zidane has confirmed that the Welshman will be staying with the club. 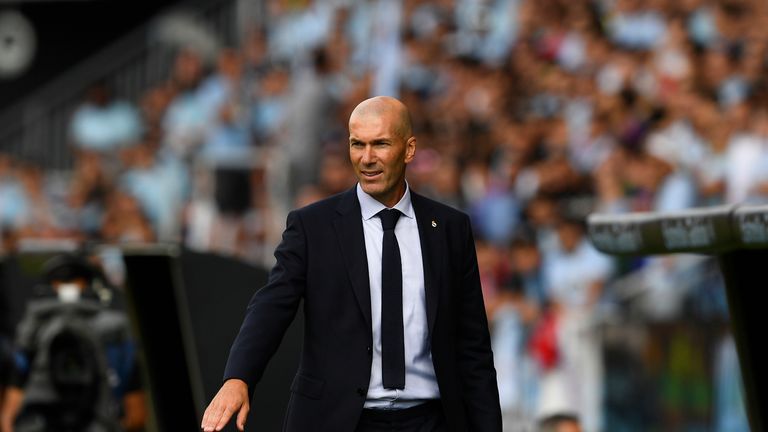 He said: "We talked about it before the match, I think we talked about it two or three times to say that he is going to stay. And all the players that are here now are only thinking about this season.

"I think this is true considering the way Gareth performed, but not only Gareth. I think that everyone played a good game. All we have to do is to think about this season and I am sure that he and all the other players only think about staying here and play."

Real Madrid goalkeeper Thibaut Courtois also praised Bale's performance and credited his side for making such a strong start to the campaign after a worrying run of results in pre-season.

"We weren't surprised at all when Bale was named in the team because the boss counts on every single player and then decides the starting 11. Gareth played an outstanding game," he added.

"We worked hard in pre-season but results didn't go our way for different reasons, but the season starts with the first game, not before. We played very well in the first half, then in the second we fought hard together with a man down."