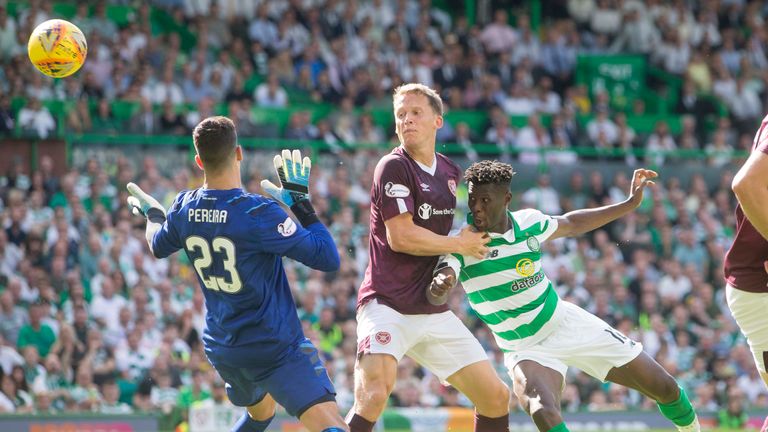 Highlights of the Scottish Premiership match between Celtic and Hearts

The Ivory Coast international has had to wait seven months for his full debut but he made his mark as Celtic quickly regained top spot on goal difference following Rangers' 1-0 win over St Mirren earlier on Sunday.

He netted just before the half-hour mark, before Callum McGregor doubled their lead on 54, and Bayo put the game to bed with an hour on the clock.

Conor Washington netted a consolation with nine minutes remaining, but Celtic saw the game out and set up next week's Old Firm clash as a battle between the top two.

Bayo got his first opportunity after peeling off his marker to meet Ryan Christie's corner. Joel Pereira blocked the header at the expense of a corner.

James Forrest delivered a first-time cross from the left wing, Craig Halkett appeared to leave it for his goalkeeper but Pereira was slow in coming out and Bayo threw himself at the ball which went in off either the frontman or Christophe Berra.

Fraser Forster made his second debut for the club, after moving from Southampton in the week was booked for hacking down Jake Mulraney outside his box before making a smart save from Aaron Hickey's well-struck half-volley moments later.

Celtic went two ahead after the break. Forrest's run and Ryan Christie's instant pass gave McGregor time to shoot from 22 yards and he fired into the corner of the net.

Hearts were lifted by Washington's goal after Scott Brown was ruled to have fouled Sean Clare as both men competed for a loose ball, but Craig Levein's side could not trouble Forster again.

Celtic now travel to Sweden for the second leg of their Europa League play-off against AIK before facing Rangers next Sunday.