Highlights of the Sky Bet Championship match between Charlton and Millwall.

Millwall kept their play-off hopes alive with a late 1-0 win at Charlton in the Sky Bet Championship on Friday night.

Jake Cooper struck the only goal after 81 minutes at The Valley to seal a victory for his side - their first since the restart.

It lifted them up to eighth in the table, two points behind Cardiff in sixth ahead of the rest of the weekend's action.

For Charlton, meanwhile, it was a first defeat and a first goal conceded following the resumption of football, and it left them 18th in the table, three points clear of the drop zone.

Millwall get back to winning ways

Both sides had good chances to take the lead in the first half. The first real opportunity fell to Charlton on 34 minutes as Macauley Bonne raced through on goal, but his strike from an angle was kept out well by Bartosz Bialkowski.

Two minutes later it was Millwall's turn to go close. Ryan Woods clipped a fine ball into the path of Jed Wallace in the six-yard box, but Dillon Phillips was alert and off his line to block it wide.

It really was a tale of two fine defences in the second half, too. Both sides made strides forward in search of a goal but it took until the 81st minute for the winning goal to be found.

Substitute Connor Mahoney charged into the box and forced Phillips into a low save, but he could only palm it into the path of Cooper, who hammered the ball into the roof of the net from a wide angle.

Man of the match - Jake Cooper

It seems appropriate for a game where defences ruled nearly throughout that a defender would pop up with the winner. Cooper was excellent in his duties at keeping out Charlton, and arrived at just the right time with a fine finish. In a game of fine margins he made the difference. Charlton manager Lee Bowyer reflects on a disappointing result against Millwall as he believes his side need to work on converting their chances if they want to compete in the Championship.

Charlton's Lee Bowyer: "It's a bit like when we played at their place. To come away with nothing it hurts. You can't create that many chances and not score a goal, but that's our problem since we've come back, we can't score in open play.

"We've had five good chances and a one-on-one with the goalkeeper and it's not good enough. If you don't score goals then you don't win games, and that's what has cost us tonight." 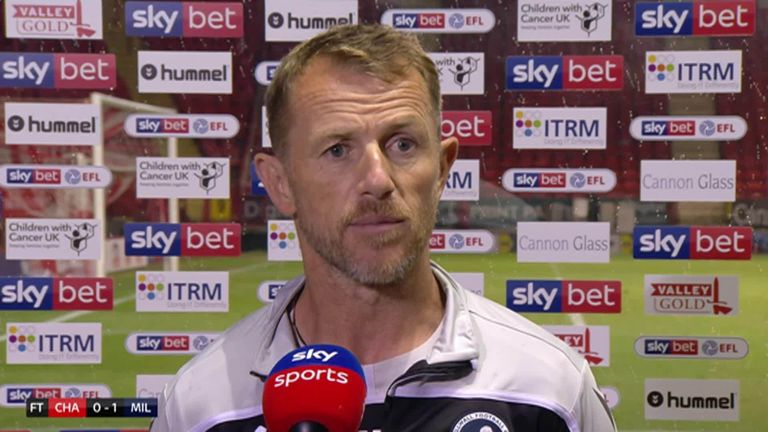 Millwall manager Gary Rowett believes his side are still in the hunt for a playoff spot as they continued their impressive record against rivals Charlton.

Millwall's Gary Rowett: "I'm really pleased. We've played well in the last two games with this new 5-3-2 system and have deserved more, but nevertheless it was encouraging. It requires a lot of interchange, movement and gettnig the passing right, and two or three times in the first half we didn't get it right and we allowed them to counter-attack. But I thought on the whole we controlled the first half, and they had to change shape to combat what we were doing.

"We tried everything we could to win the game, and you could see that by Jake Cooper, our left-sided centre-half, ending up in the box to score the winner! Then after that we saw the game out really well."

Charlton are back in Championship action on Tuesday as they head to Brentford for a 6pm kick-off. Millwall host Middlesbrough on Wednesday at 3pm.