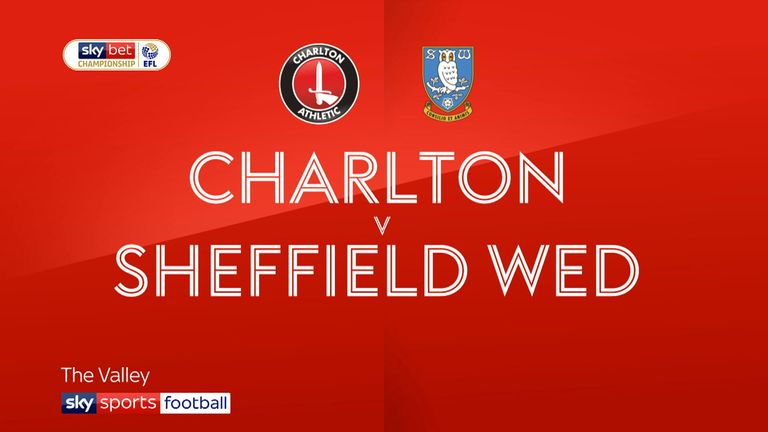 Steven Fletcher scored either side of half-time as Sheffield Wednesday battled back to beat injury-hit Charlton 3-1 at The Valley.

Fletcher got the visitors off and running with a vintage header (17), but Macauley Bonne prodded a deserved equaliser to send Lee Bowyer's side into half-time on level terms (26).

But the hosts paid the price for their shortcomings in personnel after the break, with Fletcher's penalty restoring the lead for Wednesday (80) and Atdhe Nuhiu making up for an earlier disallowed goal by sealing the victory in stoppage-time (90+3).

Garry Monk's Owls move seventh as a result of their first victory in six, while Charlton sit 17th, seven points above the Championship drop zone.

How Wednesday ended their winless run

Injuries and suspensions have limited Charlton's progress in recent weeks, leaving them without a win since October 19, and it looked though they would be dealt another blow early on against the Owls when returning frontman Nuhiu glanced Fernando Forestieri's free-kick over the line.

The Kosovan striker had strayed just offside in the build-up, but just over 10 minutes later Wednesday did nudge ahead when Fletcher made no mistake from a similar position as he headed home Morgan Fox's cross from the opposite flank.

As Charlton's injury crisis continued to bite, Lee Bowyer was only able to name five substitutes for the visit of the Owls.

Meanwhile, Garry Monk made four changes to the side that drew 1-1 with Birmingham in midweek, as Tom Lees, Sam Hutchinson, Atdhe Nuhiu and Fernando Forestieri all started.

Forestieri could have then made it two if he'd pounced a loose ball from a few yards out, but the visitors were left to rue the missed opportunity when Bonne prodded a cross from Alfie Doughty - making his first Championship start - past Cameron Dawson in the blink of an eye.

Charlton 'keeper Dillon Phillips was called into action by Barry Bannan numerous times throughout the second half, notably getting down low to his left to bravely push Kadeem Harris' shot round the post.

But though was a major part of his side's valiant efforts, he could do little to prevent Fletcher coolly tucking home from the spot after Erhun Oztumer had clumsily brought down substitute Jacob Murphy.

A thunderous effort from Deji Oshilaja epitomised the hosts' attempts to get back on track, but the game was put beyond their reach in the dying second when Adam Reach clipped the ball to the far post for Nuhiu to power in a third.

Man of the match - Barry Bannan

Co-commentator Don Goodman said during the game that he couldn't believe Bannan is still playing in the Championship, such is his quality.

The Scot backed up those claims during the game, bossing the ball, creating numerous chances and going close with a number of openings himself. If Wednesday keep up this pace, he might not be playing in the second tier much longer.

Charlton's Lee Bowyer: "It was a tough day. We've got enough injuries, but then to chuck in a few illnesses as well doesn't help. It was a bit of everything. Sickness, diarrhoea, not good. Ben Purrington was down to start, but he was ill just before we got on the coach, so we had to send him home.

"Then once we got here and put the team sheet in, Albie Morgan was being sick just before the game. We couldn't do anything about that. We just had to see how he went. Then again at half-time he was sick. That's why we took him off. He couldn't move in the end.

"I hate losing. I think that's quite obvious to see but I've just said to the players: 'Hold your heads up high. You should be proud of putting on a great team performance.' They can't give any more that what they are giving out there. We were in the game right up until the 80th minute."

Sheffield Wednesday's Garry Monk: "I'm pleased for the players because we've had a lot of frustration recently where we've played as well as that, we haven't taken our chances and a couple of costly mistakes have probably caused us not to win more games.

"We've taken leads in games and something has gone against us, but I saw the belief in the players today. We could easily have felt sorry for ourselves today when they equalised, but we didn't and we showed a great response. I think it was a deserved win."

Charlton travel to Teesside next Saturday as they face Middlesbrough at the Riverside Stadium, while Sheffield Wednesday host Brentford at Hillsborough the same afternoon. Both games kick-off at 3pm.