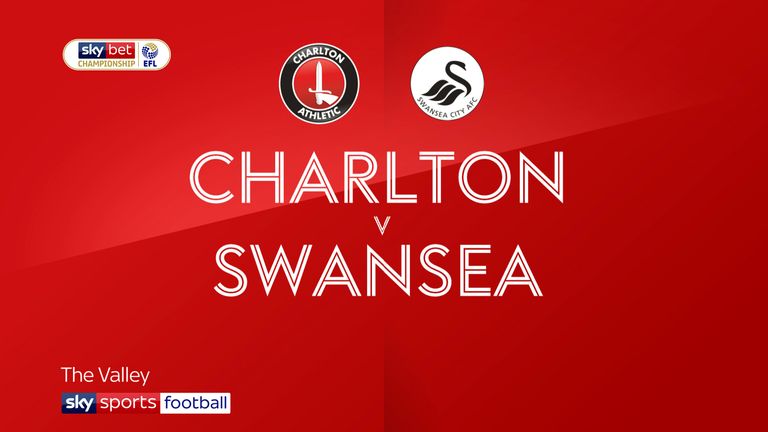 Highlights of the Sky Bet Championship match between Charlton and Swansea

Swansea moved to the top of the Championship table with a hard-fought win over Charlton at The Valley.

After Jonathan Leko's snapshot had given Lee Bowyer's men an early lead, the Swans came back strongly and equalised through Yan Dhanda on 17 minutes.

Andre Ayew then netted the winner midway through the second period, poking in after a flick-on by Joe Rodon from Matt Grimes' corner.

The omens were good heading into the contest for the Addicks, who had lost just once in their last 22 home league games. To compound matters for the visitors from south Wales, they had won just one of their previous 16 games at the Valley.

That wretched run of form in south-east London looked set to continue after Leko put the hosts in front after just two minutes.

The 20-year-old has been the subject of unwanted attention in recent days after it was revealed he had allegedly been racially abused by a Leeds player during Saturday's game.

However, the West Brom loanee's mind seemed firmly on the job in hand as he picked up the loose ball following a cross from Adam Matthews and drilled his effort superbly into the top corner, beating on-loan Newcastle stopper Freddie Woodman for pace at his near post.

Despite the early setback, Swansea looked bright going forward and just after the quarter-hour mark, their positive play reaped its rewards.

Kyle Naughton fed the ball inside to Ayew and after further measured passes around the box to Borja Baston and Jay Fulton, Dhanda eventually pulled the trigger, with his deflected effort trickling agonisingly beyond Dillon Phillips for his first goal for more than a year.

On a cold Wednesday evening, the crowd were treated to a scene of unexpected skill at half-time after a fan won £7,000 by hitting the woodwork in the crossbar challenge at the first time of asking.

The drama continued two minutes into the second period when Swansea thought they had taken the lead after Ayew headed home from Fulton's cut-back, but the ball was adjudged to have gone behind before the Ghanaian found the back of the net.

However, the former West Ham man was to get on the scoresheet on 65 minutes, reacting sharply to send the 1,222 visiting fans into raptures.

Bowyer's response from the bench was swift, sending on Jonny Williams and Chuks Aneke. The latter almost made an immediate impact when he got in a tangle with Rodon and went down in the box, leaving the home supporters incensed as referee Peter Bankes ignored their protests.

Charlton continued to stream forward in search of a leveller, but Swansea held on to win after falling behind for the third time in the Championship campaign.

Lee Bowyer: "It was a good, even game. Both sides tried to play. We were the better side in the first 20 minutes, but we got a bit sloppy in the last 25 minutes of the first half. They equalised with a deflection which we should have done better with.

"In the second half, it was end-to-end with both teams trying to win the game. It was frustrating to lose the game on the set-piece, but I won't criticise my players because they gave 100 per cent. I felt we deserved to take something from the game, but it wasn't to be."

Steve Cooper: "To reply as we did after Charlton's early goal and give a performance like that is pleasing because we had to show all sides of our game.

"It's great to score off a set-piece. In the latter stages of the game, there was a bit of an onslaught, but I can't remember Freddie [Woodman] having to make a save, which shows you that we want to defend the box and deal with whatever's coming up against us."