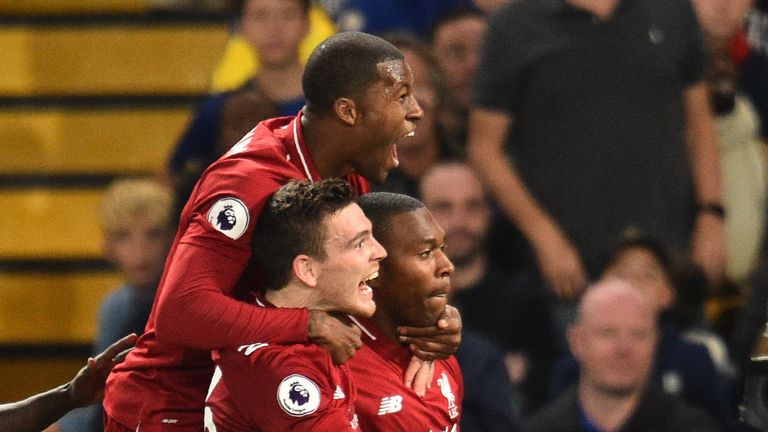 Daniel Sturridge scored a stunning late equaliser as Liverpool fought back to claim a 1-1 draw against Premier League title rivals Chelsea in an absorbing contest at Stamford Bridge on Saturday evening.

Eden Hazard fired in the opening goal after 25 minutes, just days after coming off the bench to secure a 2-1 Carabao Cup win for Chelsea at Anfield.

Mohamed Salah and Roberto Firmino had shots blocked on the line and Xherdan Shaqiri sliced wide from 12 yards out as Liverpool's hopes of extending their perfect start to the Premier League season faded.

Man of the match: David Luiz

However, they managed to salvage a draw thanks to a stunning 89th-minute strike from former Chelsea striker Sturridge, who curled a 30-yard shot over Kepa Arrizabalaga.

The result sees both sides remain unbeaten in the Premier League, but Manchester City now lead the way at the top of the table ahead of their clash with Liverpool next Sunday, live on Sky Sports.

Liverpool, who were aiming to win their first seven games of a top-flight campaign for only the second time, looked the more threatening side in the early stages as Salah twice failed to test Kepa with shots from outside the box.

Sadio Mane then sliced wide before Chelsea created their first opening; David Luiz playing a fabulous long pass over the top for Willian, who was denied by Alisson.

Chelsea took the lead in the 25th minute after some intricate build-up play in midfield resulted in Mateo Kovacic releasing Hazard, who finished into the far corner with a low strike.

Salah went close to equalising when he took the ball around Kepa and then saw a shot cleared off the line by Antonio Rudiger.

Liverpool enjoyed more of the possession in the second half but were frustrated as Kepa made a sharp save to keep out a low shot from Mane.

Hazard spurned an excellent chance to make it 2-0 when he was played through on goal by a quickly-taken free-kick but failed to beat Alisson.

Chelsea named the same side as their last league match while Gomez and Milner replaced Matip and Shaqiri for Liverpool. Van Dijk was fit to start after suffering a rib injury last weekend.

Shaqiri then skewed wide from the penalty spot and Roberto Firmino saw a header blocked on the line by David Luiz as Chelsea looked as though they would hold out.

However, Sturridge snatched a draw in memorable style as he curled a left-footed shot over Kepa from 30 yards out.

Man of the match - David Luiz

Hazard was bright throughout for Chelsea, but Luiz produced an assured display at the centre of defence. He played a couple of superb long-range passes, blocked a header from Firmino on the line and made two more interceptions than any other player on the pitch. He might still make fans nervous at times, but this was one of his better performances for Chelsea.

Jurgen Klopp: "Six, seven times we had big chances. We gave them one proper chance, they used it and we didn't use ours. That's how life is. As long as we play like we did tonight we will win football games."