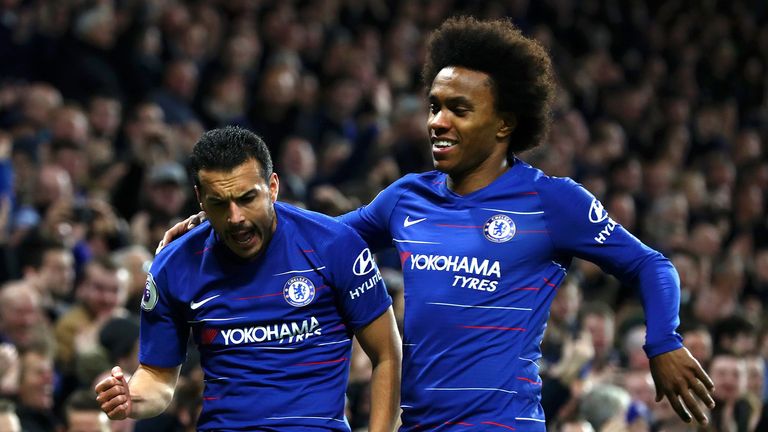 Chelsea strengthened their bid for a top-four finish in the Premier League after Willian's second-half strike handed the Blues a 2-1 win over Newcastle at Stamford Bridge.

Following Arsenal's 1-0 defeat to West Ham earlier in the day, Maurizio Sarri's side had the opportunity to open a six-point gap over the Gunners in fifth and they made the perfect start through Pedro's early strike (9).

The win sees Chelsea move to within a point of third-placed Tottenham, who face Manchester United on Renault Super Sunday live on Sky Sports, while defeat leaves Newcastle in the relegation zone.

Chelsea were without a goal in their previous two home games in the league, but they put that barren spell in front of goal behind them when Pedro latched onto David Luiz's inch-perfect through ball before lofting the ball over Martin Dubravka and into the back of the net.

Man of the match: Willian.

It was the perfect start for Chelsea, who continued to dominate possession, but Sarri's side never really pushed on from taking an early lead.

It allowed Newcastle to grow into the game and Ayoze Perez should have done better after latching onto Salomon Rondon's flick-on, but the Spanish forward sliced his shot wide of the upright with only Kepa Arrizabalaga to beat.

Newcastle were finishing the stronger of the two sides and they eventually got their reward, Clark beating Luiz in the air to head Matt Ritchie's corner past Arrizabalaga and into the bottom corner.

Chelsea came close to restoring their advantage immediately from the restart, but with Newcastle's defence sleeping, Willian passed wide following Jorginho's through ball.

Pedro then passed up two chances early in the second half, before Hazard, who had been quiet, burst into life to create Chelsea's second.

The Belgium international drove at the heart of the Newcastle defence before laying the ball off to Willian, who checked inside from the left side of the area to curl the ball beyond the dive of Dubravka and inside the far post.

Chelsea made three changes from the side that lost 1-0 to Tottenham in midweek in the first leg of the their Carabao Cup semi-final. David Luiz, Mateo Kovacic and Pedro replaced Ross Barkley, Callum Hudson-Odoi and Andreas Christensen.

Newcastle also made three changes from the side that lost 2-0 to Manchester United last time out in the Premier League. Florian Lejeune, Ciaran Clark and Sean Longstaff came in for Fabian Schar, Moahmed Diame and the injured Paul Dummett. Jonjo Shelvey also missed out for the visitors after picking up a thigh problem.

Willian then had an opportunity to wrap up all three points after latching onto another excellent through ball from Luiz. He lifted the ball over Dubravka but the ball looked to be heading wide before Jamaal Lascelles turned the ball behind.

Despite their slender advantage, Chelsea brought on Callum Hudson-Odoi for Pedro with 10 minutes remaining and soon after a chorus of "we want you to stay" was heard from the home fans, who were soon celebrating a 14th win of the season.

Man of the Match - Willian

The game was firmly in the balance when Willian produced a moment of magic to score his first Premier League goal since October. It was only this third of the season but it could prove to be one of his most important come the end of the campaign.

The 30-year-old has been linked with a January move to Barcelona but ahead of the game against Newcastle Sarri hailed him as an important player for the Blues.

The Brazilian proved his head coach right, producing a stunning curling effort to secure victory as Chelsea tightened their grip on fourth place.

Chelsea have the chance to move further clear of Arsenal when they face the Gunners next week (Saturday January 19, 5.30pm) at the Emirates Stadium.

Next up for Newcastle is a trip to Blackburn Rovers on Tuesday for an FA Cup third-round replay (7.45pm) before a return to Premier League action on Saturday at home to Cardiff (3pm).