Match report as Chelsea move three points clear at the top of the WSL after victory against Tottenham at Stamford Bridge; Emma Hayes said after the game: "We have to be more ambitious for ourselves. Is it too cheap to watch women's football? I think it is, especially the top games" 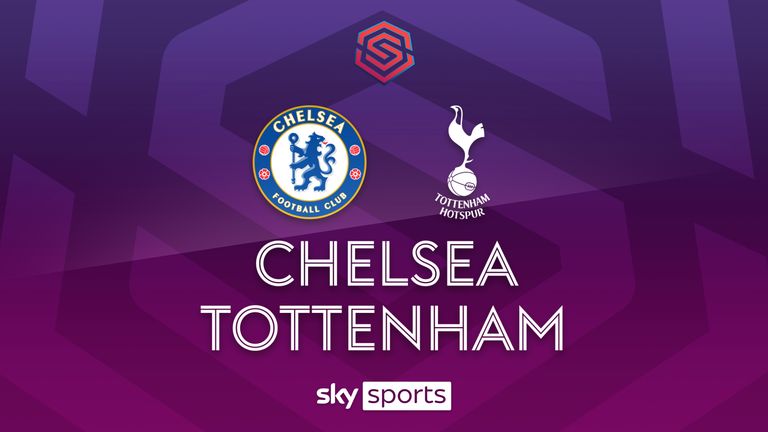 Highlights of the Women's Super League match between Chelsea and Tottenham Hotspur.

Sam Kerr's first-half strike helped Chelsea to a comprehensive 3-0 victory over Tottenham at Stamford Bridge and lifted the Blues back to the top of the Women's Super League table.

Spurs started brightly but the Blues took full control in front of 38,350 supporters.

Erin Cuthbert doubled the hosts' lead before Guro Reiten scored from the spot ahead of the break in Emma Hayes' first match back in the dugout following her emergency hysterectomy last month.

The visitors controlled the opening minutes and had the first opportunity through Drew Spence, whose low cross from the right was easily stopped by Ann-Katrin Berger.

Spurs were awarded an early free-kick after Jessie Fleming brought down Spence, returning to face her former club for the first time, but Berger was there to collect Eveliina Summanen's effort.

It took just four minutes for Chelsea to score the only goal the last time these sides met at the Bridge. This time it took Kerr 12 minutes to find the opener, dodging a late challenge before coolly firing into the bottom-right corner.

Kerr nearly scored another moments later when she chased after a loose ball in the area but was beaten by a diving Tinja-Riikka Korpela, who did well to stop Kerr's low strike soon after.

Chelsea scored their second when Reiten's corner bounced in the direction of a wide-open Cuthbert just outside the 18-yard box, who brought the ball down with her chest before sending a volley into the top-right corner.

The hosts made it three when Lauren James was charged down in the area and the referee pointed to the spot. Reiten stepped up and sent Korpela the wrong way with an assured finish.

Spence hoped to deny her former club a clean sheet, but sent her effort wide of the left post before Berger came off her line to take the ball out of the air and prevent Ashleigh Neville from cutting the deficit before the break.

Chelsea kept up the pressure after the restart and had several early chances to add to their advantage, Korpela first blocking Magdalena Eriksson's sharp strike before Millie Bright's effort pinged off the crossbar.

Jessica Naz broke down the right to try to set up something for Spurs but Bright was there to clear her cross, Berger comfortably catching Neville's long-range effort soon after.

Spurs emerged unscathed from a sustained period of Chelsea attacks, James missing a chance to extend the Blues' advantage on 75 minutes by sending her effort from 20 yards inches wide of the left post.

After the game, Chelsea boss Hayes was delighted by the turnout but remained resolute in her assessment of the financial bottom line, saying fans should be paying more to watch women's football.

Hayes insisted the move was necessary to cover the added resources needed to stage matches in Premier League venues.

"I'd like to be here more," she said. "I think we all know that solving the conundrum in the women's game around what do we do from small stadia, is there a medium-term plan to go to medium-sized stadiums before eventually everybody comes home to the large stadium?

"I don't know, but I'm absolutely certain we're all outgrowing our small stadia, that I'm sure of. I know the players want to be here more, but I also think it's important that there is a business cost to playing. I think one of the biggest things that perhaps we don't talk enough about is how cheap women's football is.

"I really believe we have to increase the overall pricing structure if we're to play more in these places, because there is a cost implication of doing it. And I think the audiences are there, not for every game but certainly for maybe eight games, 12 games a year.

"But we have to be more ambitious for ourselves. Is it too cheap to watch women's football? I think it is, especially the top games."

Ticket prices across the women's top flight remain considerably lower than in the men's game, with adult prices for Sunday's WSL match between Chelsea and Spurs listed on the Blues' website as starting at £9 compared to a cheapest price of £48 (for unrestricted view) to see the men's side in action against Premier League opposition.