Report and highlights from the Sky Bet Championship clash between Coventry and Fulham at the Coventry Building Society Arena; Viktor Gyokeres scores twice and Matt Godden and Ian Maatsen also net in remarkable second half 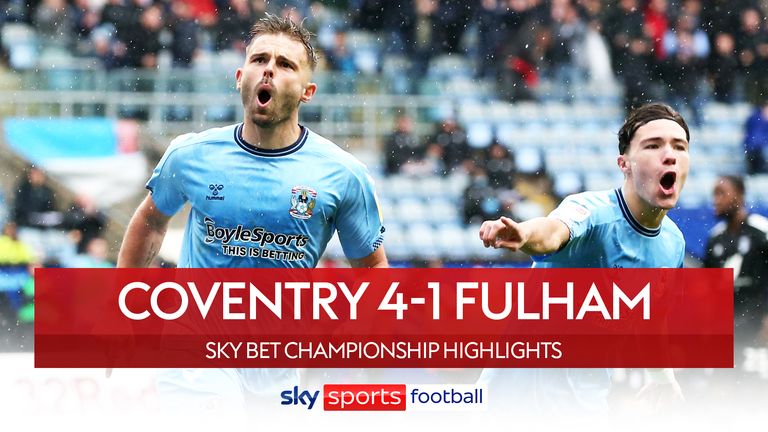 Highlights of the Sky Bet Championship match between Coventry City and Fulham.

Fulham shaded a tight first half and took the lead when Kyle McFadzean headed into his own net in the 18th minute.

But the game turned on its head after the break as Coventry launched a stunning comeback.

Viktor Gyokeres equalised after a defensive mix-up in the 47th minute before Matt Godden made it 2-1 from the penalty spot. Ian Maatsen then drilled in a brilliant third and the rout was completed by Gyokeres in the 69th minute as he rolled a shot past Paulo Gazzaniga.

The result lifts Coventry into third in the Championship, level on 22 points with West Brom and Bournemouth, while Fulham slip to fifth.

There was little sign of the drama to come during an evenly-contested first half that Fulham just edged, having taken the lead when McFadzean headed into his own net under pressure from Aleksandar Mitrovic at a corner.

Coventry, who were thrashed 5-0 by Luton in midweek, had few chances of their own until a blistering start to the second half.

Gyokeres levelled following a poor defensive mix-up between Tim Ream and Josh Onomah just outside the box, and Godden then converted a penalty after being tripped by Antonee Robinson, although replays showed there was little contact. 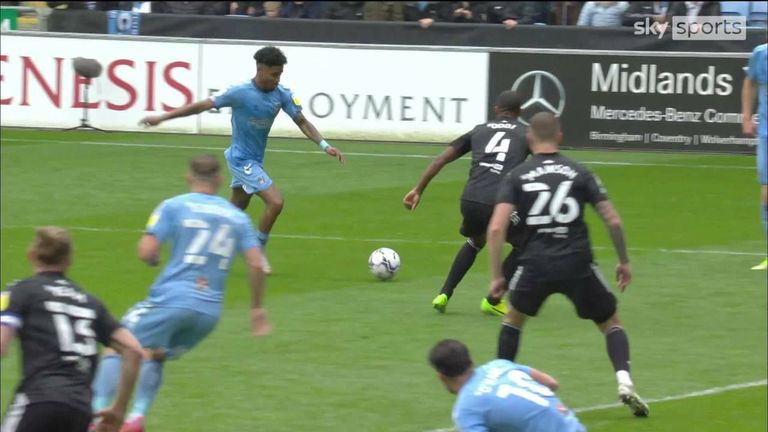 The quickfire double rocked Fulham and they soon fell further behind as Maatsen fired a fine left-footed shot past Gazzaniga from inside the area.

A remarkable comeback was rounded off when Godden swung in a cross from the right touchline that found Gyokeres, who took a touch and slid the ball into the net.

Gazzaniga pulled off a brilliant fingertip save to deny Gyokeres a hat-trick, as Coventry finished on top and went soaring up the table.

Man of the match - Viktor Gyokeres

There were plenty of contenders for Coventry with Callum O'Hare and Godden both excellent, but Gyokeres takes the honours for his two goals. Neither were struck particularly forcefully but they were well placed and gave Gazzaniga little chance. Gyokeres almost had a hat-trick too, with a curling shot brilliantly kept out by a diving Gazzaniga. Gyokeres now has nine for the season in the Championship - only behind Mitrovic (10) in the scoring charts - and he will be key to Coventry maintaining their strong form.

Coventry's Mark Robins: "I said believe, just about belief. Knowing they were getting in good positions to stop them, but also having the belief, the vision and ability to do what we want to do, which was move the ball really quickly and shift them.

"We know where they were and where we could exploit and they exploited their positions really well by quick movement, good vision, good execution of passes and a willingness to press and get all over them."

Fulham's Marco Silva: "It's something that I don't like to say but I have to apologise to our fans. The second half was wrong, everything was all wrong from the beginning to the end of the second half.

"Unfortunately the referee did everything wrong as well because it's a clear dive for the penalty, no foul at all, but it is not his fault we lost. After that we had enough time to react, to do different things, but we have to react in a different way."

Both teams return to action on Saturday, October 16, following the conclusion of the international break. At 12.30pm, Fulham host QPR in a west London derby at Craven Cottage - live on Sky Sports Football - while at 3pm, Coventry travel to Ewood Park to face Blackburn.