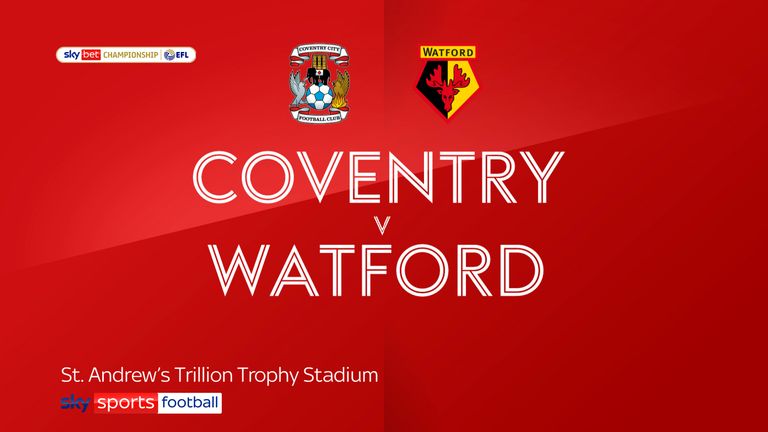 Highlights of the Sky Bet Championship match between Coventry and Watford

Watford lost further ground in the race for automatic promotion from the Sky Bet Championship as they were held to a goalless draw by Coventry at St Andrew's.

Mark Robins' men passed up a series of chances to break the deadlock in the first half but held firm as the Hornets - who saw captain Troy Deeney strike the crossbar - piled on the late pressure.

They sit 19th, three points above the relegation zone, while Watford stay fifth, six points away from the top two, having played one game more than second-placed Brentford.

How Watford struggled in the Midlands

It was not immediately clear which team was vying for promotion and which one was hoping to stay in the division for much of the first half; Coventry imposed themselves early on and fired a warning shot when Max Biamou collected Sam McCallum's direct ball forward and flashed a shot across the six-yard box.

A smart save from Marko Marosi kept out a deft chip from Andre Gray but the hosts, almost immediately, broke forward, with Gustavo Hamer's 15-yard header Jamie Allen's cross held by Daniel Bachmann.

Within minutes, the Sky Blues had gone close again, when Adam Masina flicked Gustavo Hamer's free-kick into the path of Dominic Hyam, who headed over the bar and, five minutes before the break, Biamou had members of the Coventry bench off their seats when he headed Julien Dacosta's cross just inches wide.

Xisco Munoz had highlighted Watford's lack of intensity in Monday's 2-1 defeat to QPR and, while Bachmann was the busier goalkeeper throughout, the second half brought a slight improvement.

The Hornets started to assert themselves inside the final 10 minutes and came within a crossbar's width of the opener when Deeney's late header struck the woodwork, but with Coventry's inability to convert their chances, they escaped with a point.

Coventry's Mark Robins: "I think we've got to be pleased with the performance - if we can perform like that for the rest of the season we will be fine. They didn't really have a great deal in terms of chances because we defended really well but they are always dangerous.

"Max Biamou has led the line brilliantly for us but he's running around with a torn cartilage. He's been outstanding for us but we are three strikers down and Max is half-fit. It was a hard-fought point but one that really could have been so much more for us. And really, if we win that game, we are sort of heading towards mid-table. The teams above us are catchable and performances like that will help us to climb the table."

Watford's Xisco Munoz: "We have had this [away] problem all the time in the Championship. It is true we must improve on different things but now is the moment for us to stick together and continue working hard. When we play away we have problems. This has not changed. Sometimes you need to take more risks to try and score. We need to try and change different things. It is not easy.

"For the players I don't know if it is a confidence problem or not. We need to work to try to give the best confidence for our strikers. Players need to give their maximum in games to try to score. The Championship is long - we need to continue working hard, we need to get better performances."

Man of the match - Matty James

Having put his injury worries behind him, during loan spells with Barnsley and now Coventry, James has already played more games than he has done in the past three campaigns combined.

He turned in a high-quality performance at St Andrew's, too, with 70 touches of the ball and 50 passes made, with 82 per cent accuracy.

Both sides are next in action on Saturday, February 13 at 3pm. Coventry travel to the Cardiff City Stadium to take on Cardiff, while Watford host Bristol City at Vicarage Road.