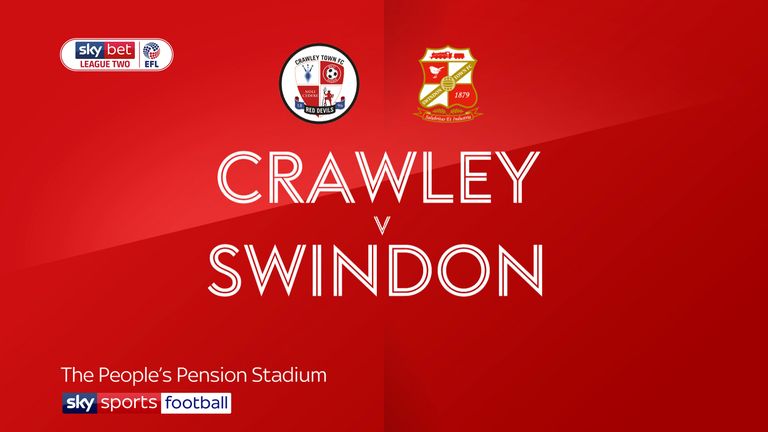 Eoin Doyle made it 13 goals in 13 league games for Swindon with a hat-trick in a crushing 4-0 success at Crawley.

Jerry Yates added the Robins' fourth goal late on, with Crawley failing to score in a league match for the first time since March 30.

Swindon had not beaten Crawley in their previous nine league meetings but striker Doyle gave them the perfect start inside five minutes.

The league's leading marksman tapped in his 11th goal of the season from a cross by Anthony Grant to score for the fourth game in a row for the first time in five years.

The Robins lost Lloyd Isgrove through injury before Crawley striker Ashley Nadesan raced into the area but was thwarted by onrushing keeper Steven Benda.

Doyle was on target again as Swindon doubled their lead two minutes before the break, with the former Republic of Ireland international heading powerfully home from Dion Donohue's cross.

Former Crawley loanee Michael Doughty was denied by the crossbar and Crawley midfielder Nathan Ferguson also fired against the post in added time.

Forward Diallang Jaiyesimi, making his first start for Swindon, forced keeper Glenn Morris to save low down before Doyle completed his hat-trick on 61 minutes with a close-range finish following a pass by substitute Keshi Anderson.

Doyle, on loan from Bradford, was off target from a cross by Rob Hunt as the Robins dictated the play and striker Yates added the fourth three minutes from time from a cross by substitute Kaiyne Woolery.