Match report and highlights as Man Utd bring an end to their disastrous season with a 1-0 defeat at Crystal Palace thanks to a goal from former player Wilfried Zaha; Man Utd avoid playing in the Europa Conference League in spite of the loss after West Ham's defeat at Brighton

FREE TO WATCH: Highlights of Crystal Palace against Manchester United in the Premier League.

Manchester United secured Europa League qualification despite losing 1-0 at Crystal Palace on the final day of the season with new manager Erik ten Hag watching on from the stands.

Wilfried Zaha fired Palace scored what proved to be the winner after 37 minutes as United produced a lacklustre display in interim manager Ralf Rangnick's final game in charge.

It brings an end to a disastrous season for United, who have recorded their lowest ever points tally in the Premier League era and finish on zero goal difference.

Meanwhile, Palace secured their first home win over United since 1991 to finish in 12th in Patrick Vieira's first season in charge.

Ten Hag watches on as Man Utd stumble into sixth

United struggled to put on a show for their new manager in the first half, as they delivered a tepid performance, while Palace posed a dangerous threat on the break.

Edinson Cavani's scuffed effort came close to beating the wrong-footed Vicente Guaita after Bruno Fernandes' blocked effort fell to the Uruguay international inside the penalty area, but the Palace goalkeeper recovered well to keep it out.

Fernandes also had a chance of his own when Anthony Elanga tried to find him at the back post with a low cross after a surging run from halfway, only for the midfielder to miss the ball by a yard.

But it was Palace that posed the bigger threat on the break, making the most of some slack passing by United, with Zaha and Jeffrey Schlupp both seeing close-range efforts kept out by De Gea.

Eventually, Zaha found a breakthrough less than 10 minutes before the break - after Fernandes recklessly lost possession in his own half - as he cut across Diogo Dalot and Victor Lindelof on the edge of the box before coolly finishing with a low-effort in the bottom left corner.

Palace defender Joel Ward produced a fine last-ditch challenge to deny Mejbri a goalscoring opportunity from six yards out before the 19-year-old forced Guaita into a save with an effort from the edge of the area.

But the fiery Frenchman was soon replaced by Juan Mata - making his final appearance for United - having been booked in the first half after a scuffle with Zaha and Rangnick refused to take any chances with the 19-year-old.

Acamdey graduates Shola Shoretire and Alejandro Garancho came off the bench, with the latter a whisker away from equalising from Fernandes' low cross at the back post.

But overall, United never really troubled Palace and produced another sub-par performance which has typified their season, and were lucky that Brighton did them a favour.

What will Rangnick's Man Utd legacy be?

Sunday was interim Ralf Rangnick's final game in charge of United before taking up a consultancy role for the next two years, which he will juggle with his responsibilities as the new Austria manager.

A lot of excitement surrounded his arrival. Rangnick's work developing an exciting, modern, high-pressing style of football at the Red Bull group and Hoffenheim imbued a sense of hope and optimism at United after a collapse under his predecessor, Ole Gunnar Solskjaer.

But the Rangnick experiment hasn't worked. Top four still felt like a possibility when he first arrived, but under Rangnick this side has fallen to United's worst season in the Premier League era.

He admits that too many compromises were made to incorporate Cristiano Ronaldo - "he's not a pressing monster", the German said on Friday - and United's other less-defensively motivated forwards into a system that hasn't reflected his ethos. Rangnick says he and his staff must share the blame.

Aside from his obvious failings on the pitch, Rangnick has brought a fresh perspective to Old Trafford. Solskjaer sought to deal with any problems behind closed doors, keeping the media at arm's length, while Rangnick has been transparent in his offerings.

His honesty has shone a light on some of the biggest problems at United, leaving no one in any doubt about the task ahead of incoming manager Erik ten Hag.

Rangnick hasn't succeeded on the pitch, but he's certainly made a big impact off it. It's important his voice is heard over the next two years - his expertise and experience of rebuilding football clubs from top to bottom could prove to be crucial.

Rangnick: Brighton did us a favour 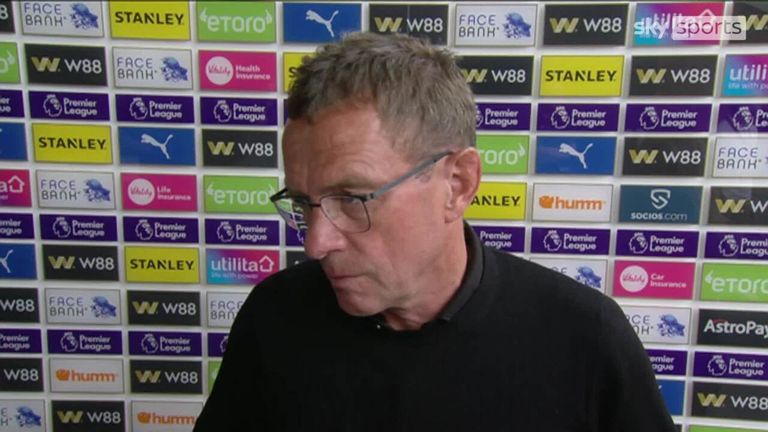 Manchester United boss Ralf Rangnick says that unforced errors during their loss to Crystal Palace is indicative of their performances this last couple of weeks.

"Yes, I think Brighton did us the favour to turn the game around because they were losing at half-time. They scored three times in the second half and that was the good thing about the weekend and about this fixture.

"We would have loved to take care of ourselves but in a way the game was indicative of last couple of weeks, especially when we played away from home.

"It was a new experience for me, not necessary coming in the middle of the season but knowing that it would be an interim role. Unfortunately we didn't have any pre-season and unfortunately we couldn't strengthen the squad.

"These things happen and in hindsight it was a little bit bittersweet or sweet bitter rather because in the first couple of weeks and months did well. We collected enough points with an average of 2.1 until the game against Atletico but I think that defeat in the Champions League was in a way like somebody popped the balloon."

De Gea: Those who don't want to stay, just go

"It's the same feeling. The level we have shown in the last three or four months isn't enough to win a Premier League match, we were sloppy, we lost some easy balls around our box, it's impossible to win the games.

"I just want to be positive, to forget about this season. The new manager [Erik ten Hag] was in the stands, so that's a good signal. I hope things will get better for next season - that's the past already. We all know it's been a bad season, for everyone.

"The people who don't want to stay, just go, and the people who really want to stay at the club, who want to fight for the club, let's have a good rest in the summer, prepare ourselves in the mind and in the body and be ready to fight again next season."

Vieira: The best way to end the season 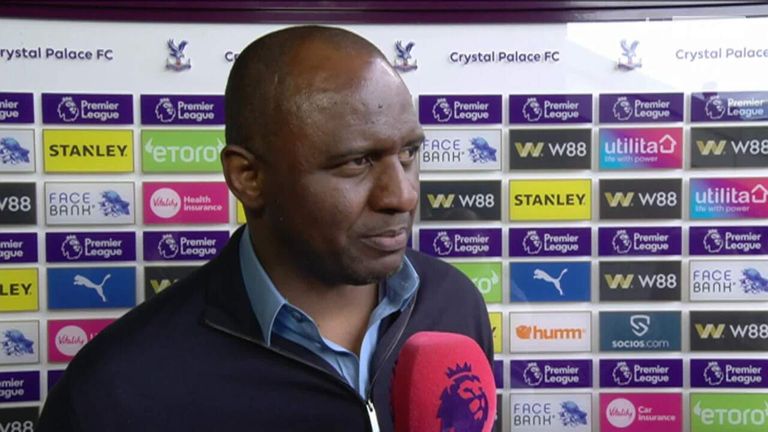 Crystal Palace boss Patrick Vieira says that the win over Manchester United was important despite not playing especially well.

"It was the best way to end the season, to win the game against United because of what they represent in the Premier League.

"I was really pleased because we won and we had another clean sheet at home so a good way to end the season."