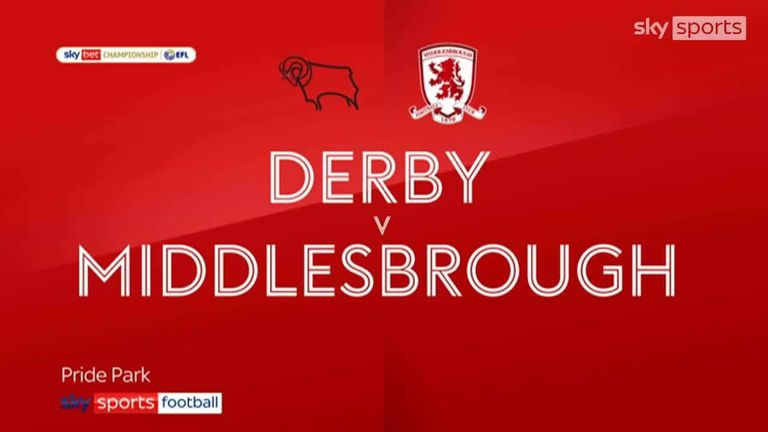 Highlights of the Sky Bet Championship match between Derby County and Middlesbrough.

Derby earned a second clean sheet in four days when they held Middlesbrough to a 0-0 draw at Pride Park.

The experience of Phil Jagielka and Curtis Davies helped keep the visitors out in a game of few chances.

Kelle Roos saved well from Uche Ikpeazu and Jonny Howson but Derby, operating under a transfer embargo, showed character and spirit to follow up the midweek win at Hull.

Louie Sibley was denied by an excellent save from Joe Lumley, who also had to be alert to push away a free-kick from Max Bird.

Derby forced a couple of corners which came to nothing before Ikpeazu made a powerful run which was halted just outside the area.

Middlesbrough stretched Derby's defence in the 18th minute when Anfernee Dijksteel whipped in a dangerous cross from the right but no one in a red shirt could get on the end of it.

Derby responded with a good move up the Boro left in the 21st minute that ended with Craig Forsyth getting in a shot that was easily dealt with by Lumley before the visitors had the best chance so far three minutes later.

A free-kick flashed across the six-yard box to Ikpeazu who turned inside and struck a low shot that Roos saved with his legs.

Derby won a free-kick in the 31st minute when Lee Peltier was booked for tripping Graeme Shinnie 25 yards out and Bird beat the defensive wall only for Lumley to turn the ball behind.

Bird had another chance in the 33rd minute when he got in on the left and drove in a low shot which Lumley blocked before Boro cleared.

Derby were getting in some good positions and Bird played in Sam Baldock in the 42nd minute but his shot from a tight angle was saved by Lumley.

Ikpeazu made another strong run at the start of the second half but his low shot lacked the power to trouble Roos.

Lumley had to make an excellent save in the 55th minute when he dived full length to his right to palm away a Sibley shot and Roos did similarly well in the 63rd minute when he parried Howson's header at the back post.

Boro had created few clear chances in the game and they fashioned another in the 84th minute when Marc Bola swung in a cross that Matt Crooks headed against the top of the bar, but that was the last opening of the game.

Derby's Wayne Rooney: First half, I thought we were very good and made it very difficult for them to put any pressure on us. We created some good chances, we have to be more clinical, we know that, we have to take more than what we are.

"Second half we got dragged into their game but the lads stood firm and didn't allow themselves to be bullied and we came out with a point, I think maybe last season we lose that game."

Middlesbrough's Neil Warnock: "That's a good point for us today in the end, I'm disappointed we didn't win it but if it hadn't been for Joe [Lumley] in the first half we might have lost it.

"I saw him in the hotel and said 'don't beat yourself up about QPR, you were rubbish but just get on with it!'. He smiled but he's a good keeper and no one would have been more disappointed than him last week."