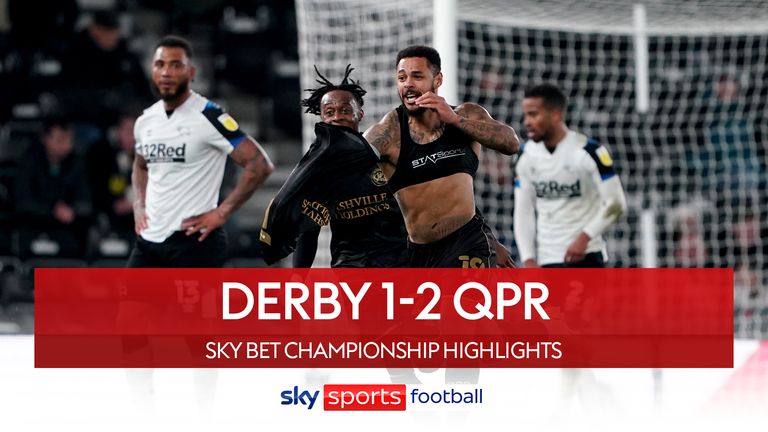 Andre Gray scored a stunning late winner as QPR came from behind to beat a resilient Derby 2-1 on Monday night.

But in the final minute of normal time at Pride Park, substitute Gray took control of a loose ball, took two touches, turned and fired in the goal that sealed a fourth win in five games for Mark Warburton's team.

They move above West Brom into third as a result, with Derby unable to add to their points tally after another largely encouraging performance.

Given the fact Derby had taken four points from Championship front-runners Fulham and Bournemouth over the last eight days, they had every right to be brimming with confidence for the visit of another high-flying side - and inside 30 seconds, they were almost ahead.

Nathan Byrne rode a challenge on the right, steadied himself and pulled the ball back across the box for Graeme Shinnie, who dragged a shot wide of the right-hand post, with Lawrence unable to react quickly enough to stick out a leg and divert the ball past Seny Dieng.

However, he did just that less than 10 minutes later. The fearless start to the game continued as Shinnie's glorious defence-splitting pass found the Wales international, who nipped a yard or two ahead of QPR defender Jimmy Dunne and thumped a shot into the roof of the net that left Dieng rooted to the spot.

Derby sat somewhat deeper after that, allowing QPR to dominate possession, but the visitors struggled to convert that into meaningful openings; Charlie Austin's header over the bar from Ilias Chair's free-kick was about as good as it got in the first half. 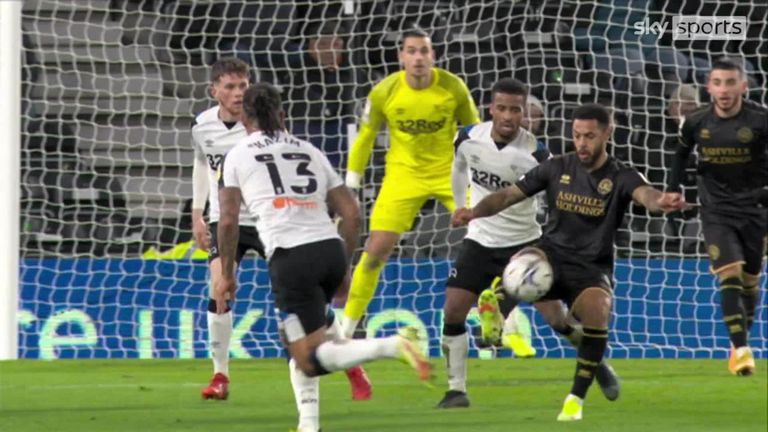 Andre Gray pulled off a moment of magic for QPR to break Derby hearts, giving the Rs a late 2-1 win at Pride Park

That all changed after the restart and, within minutes, the visitors were level. Austin chased a long ball down the left channel, dipped into the penalty area and hung up the ball for Willock, who sent an emphatic side-footed finish into the top right corner - a strike that extended QPR's scoring streak to 31 league games in succession.

As the visitors pushed for a winner, Chair headed a Willock cross over the bar and, around 15 minutes later, the Morocco international connected with another cross from the former Arsenal trainee and sent a header onto the woodwork.

On this occasion, though, it helped to set up the winner, as Gray collected the loose ball and produced a moment of magic to win the game in the most incredible fashion.

QPR are really getting into the groove at the moment and Chris Willock is playing a key role in them doing so. The goal at Pride Park - where he looked comfortable on both flanks - was his third in four games and he was instrumental in the build-up to Gray's winner, too.

Derby's Wayne Rooney: "I feel, tonight, we got what we deserved. We're better than that, we know that. There wasn't a lack of effort, we were sloppy on the ball and lost it too easily. We started really well and got the goal early on but from there, really, everything we worked on, we didn't do well enough.

"At half time, I said to the lads that we were lucky to come in 1-0 up, that it was a wake-up call and that we needed to be better and not make so many silly mistakes. I didn't think we deserved anything tonight."

QPR's Mark Warburton: "We looked much better in the second half. We lacked intensity in the first half; we were tentative and lacked any real pace and purpose about our play. We gave away a soft goal and they never really threatened us much after that, respectfully.

"It was pleasing because we had to improve. It's about that belief, that character and, for us, that was a really important win tonight."

Derby return to action at 3pm on Saturday, December 4, when they travel to Ashton Gate to face Bristol City, while QPR host Stoke at the Kiyan Prince Foundation Stadium at 2.30pm the following day - in a game live on Sky Sports Football.