Report and highlights from the Sky Bet Championship clash at Pride Park as Derby produce an important victory. 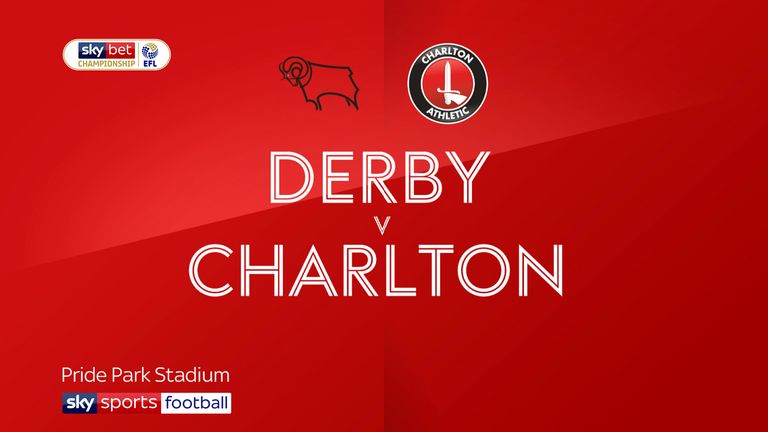 Highlights of the Sky Bet Championship match between Derby and Charlton

Two goals from 18-year-old Jason Knight helped 10-man Derby to a convincing 2-1 victory over Charlton in the final EFL game of the decade at Pride Park.

With Derby-bound Wayne Rooney watching on, Knight nodded home from point-blank range to score his first senior goal (10) just a few minutes before Krystian Bielik was shown a straight red card (17) for a dangerous tackle on Conor Gallagher.

And even though the hosts were a man down for the majority of the game - contested by two teams near the bottom of the Championship table - the teenager Knight extended Derby's lead (77) shortly before substitute Lyle Taylor tucked away a consolation penalty (83).

The result means Philipp Cocu's men move up to 17th. For Charlton, they drop down to 19th.

Derby almost scored in the opening minute when Martyn Waghorn was sent clear through by Knight, but Phillips denied him.

It was the young forward Knight who went on to score Derby's opening goal. Waghorn's poked effort looped into the air for the 18-year-old to bravely nod in from point-blank range.

The hosts were reduced to 10 men in the 17th minute after Bielik produced a nasty studs-up challenge on the evening's pantomime villain Gallagher.

Andre Wisdom was lucky to escape a red card in the 41st minute after he planted his studs into Gallagher's foot, but referee Jeremy Simpson felt a yellow was sufficient.

Derby continued to dominate in the second half as Charlton failed to make their extra man count.

Knight volleyed in his second senior goal unmarked in the box late in the second half before Taylor scored a consolation penalty after Gallagher was brought down by Curtis Davies in the box.

Charlton rallied late on, but Derby held on for an important victory to end their seven-game winless drought.

Man of the Match - Jason Knight

Not only did Knight show his quality with a poacher's instinct to score his first two senior goals, but he also caused havoc down the left flank throughout the game.

Rooney has already spoken highly of Knight, and now the former England international is a part of the Derby setup Knight will surely learn a thing or two.

Derby manager Phillip Cocu: "I can only be positive because it was a great performance. We focused on getting a good start today and they did. We scored a goal by Jason and I don't know if it was a red card [for Bielik].

"The difference was we were leading and we defended well and still tried to play and going forward into attacking positions. It was deserved.

"Jason Knight had a wonderful evening and I am very happy with the win."

Charlton manager Lee Bowyer: "I'm disappointed. In my eyes, we should have gone and won the game but we didn't for a number of reasons. In possession we were poor. We created nothing. Maybe the first shot we had on target was the penalty.

"We got ourselves into many good areas out wide with overloads but the crossing and final ball was poor all night long. We were patient but the quality was very bad.

"Credit to Derby they deserved to win today. We got what we deserved which was nothing."

Derby host Barnsley on January 2. Charlton, meanwhile, travel to Wales to take on Swansea City on the same day.