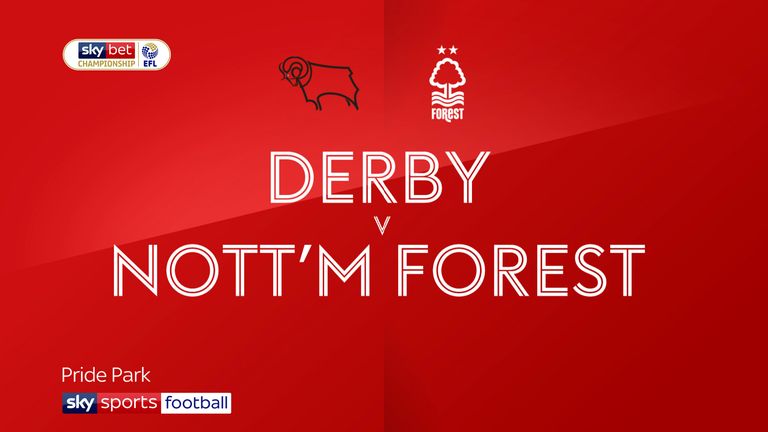 Highlights of the East Midlands derby as Nottingham Forest travelled to Derby County.

Chris Martin rescued a dramatic late point for Derby as they held Nottingham Forest to a 1-1 draw in the East Midlands derby at Pride Park.

In second-half stoppage-time, Derby were reduced to 10 men when substitute Martyn Waghorn was shown a straight red card after a studs-up lunge on Ryan Yates, but Martin then salvaged the most unlikely of points deep into stoppage-time.

Sabri Lamouchi's men miss the chance to leapfrog Brentford into third in the standings as a result, with Derby three points adrift of sixth-placed Cardiff with five games left to play.

How Forest were dramatically denied the derby spoils

In a departure from their usual compact approach, Forest started on the front foot at Pride Park and were rewarded for doing so before Derby had managed to impose themselves on the game.

A Ben Watson pass was collected by Lolley and, after he managed to advance unchallenged, he dug out a shot from 25 yards, which took a slight deflection before beating Hamer and crossing the line via the far post.

The Rams took control of proceedings but should have done better when Craig Forsyth's low cross was clumsily parried by Forest stopper Brice Samba, moments after Chris Martin had headed high over the crossbar.

Much of the game was played at a pedestrian pace after the break, with the visitors camped in their own half. But despite controlling the possession as a result, Phillip Cocu's side failed to capitalise on their dominance and could have been further behind were it not for two spurned chances from Lewis Grabban and Silva's strike off the woodwork.

The game looked to have escaped from their grasp completely when Waghorn was dismissed, but though Chris Martin's header was hooked off the line minutes later, the goal decision system quickly intervened to award the goal and earn Derby a point.

Man of the match - Chris Martin

Phillp Cocu restored the frontman to his starting lineup at Pride Park, after he started on the bench for the midweek trip to Derby, making a nuisance of himself and holding up the ball for Louie Sibley to utilise.

He displayed his predatory instinct to secure a late point, which will certainly prove important as the Rams try to force themselves into play-off contention in the season's dying embers.

Nottingham Forest assistant Bruno Baltazar: "It's very frustrating, we had a plan which we stuck to until the 96th or 97th
minute but unfortunately we didn't manage to hold the score. It's not the first time this season and we need to work on this, the concentration and to focus until the last minute of the game.

"We had chances to score the second goal and at this time of the season, we can't miss so many specific chances and then we are playing against 10 men, it's unacceptable that we lost these two points at this stage of the game and we need to work on this really quickly." 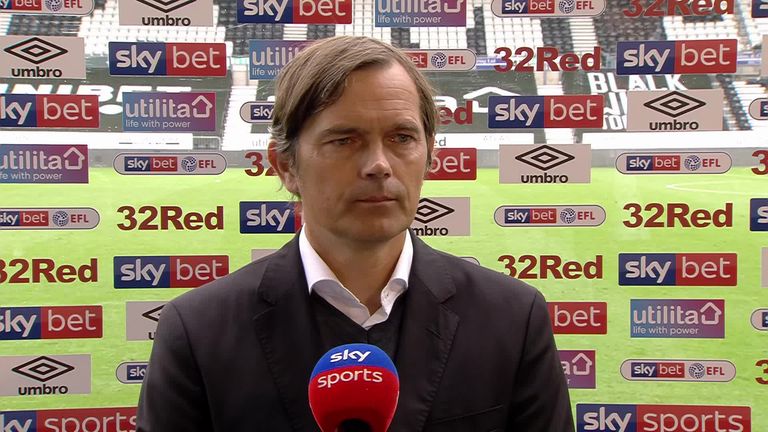 Phillip Cocu felt Derby deserved their late equaliser against Nottingham Forest in the 1-1 draw and remains positive that they can still push for promotion.

Derby's Phillip Cocu: "We knew it would be a tough game and from the moment we conceded the goal it was going to be much harder against one of the best-organised teams in the league. We conceded an easy goal, and we had a poor start, we hesitated and we were slow which changed after we conceded which I'm a little disappointed about.

"But in the end we got an important goal, mentally we are in a good place and we kept pushing. Now having this one point we keep a positive feeling and we are still in a good position to fight for a play-off spot."