Report and highlights from the Sky Bet Championship clash between Derby County and Preston at Pride Park as Martyn Waghorn sees red for Rams before Alan Browne earns North End a stoppage-time win on Boxing Day. 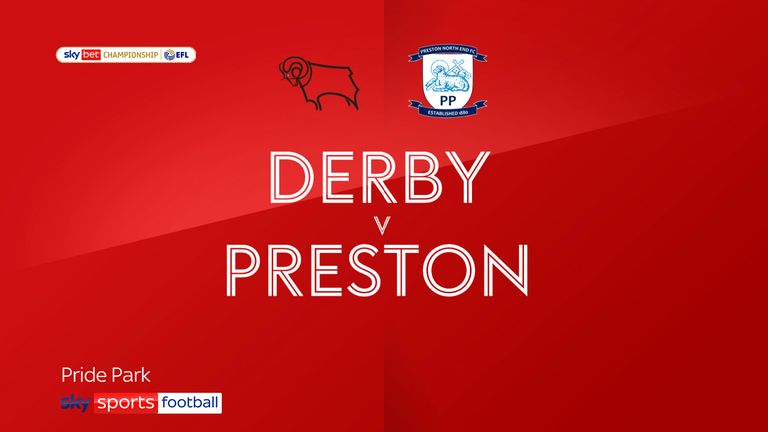 Alan Browne curled in a superb finish to shatter Derby, who had played for 70 minutes with 10 men after striker Martyn Waghorn was shown a straight red for a dangerous tackle on the Preston skipper.

Preston had struggled to take advantage and looked to have run out of ideas until Browne struck to deny Derby the point that would have seen them move out of the bottom three.

Derby had scored twice in a game for the first time this season in their previous match against Swansea, and they had an early chance with Waghorn heading over from a free-kick in the fifth minute.

It was a confident start from Derby, who were getting Nathan Byrne in on the right. But Preston went close in the 15th minute when Scott Sinclair pulled the ball back to Sean Maguire, who saw his shot blocked before Paul Gallagher sent the follow-up over the bar.

Derby had to regroup five minutes later when Waghorn went in over the top on Browne and was shown a red card by referee Darren Bond.

Waghorn could have no complaints after launching such a wild challenge which could have seriously injured the Preston captain, who was able to continue after lengthy treatment.

Preston made the extra man count with a good period of pressure, forcing David Marshall to claw away a low cross, although the half ended with neither goalkeeper called on to make a serious save.

That changed six minutes into the second half when Sinclair surged forward up the left before switching to Maguire who played in Tom Barkhuizen, and his low drive was parried at his near post by Marshall.

Another good move up the Derby right ended with Maguire having a shot deflected into the side netting, but the home side broke dangerously through Byrne, only for Jason Knight to plant his cross into the arms of Declan Rudd.

Marshall almost presented Preston with a goal in the 70th minute when he badly sliced a clearance but Andre Wisdom made a great challenge as Jayden Stockley was poised to strike.

Derby had defended well but they forced a corner which Matt Clarke headed at Rudd, who then had to come out quickly to deny Kamil Jozwiak.

Despite being a man down, Derby were looking increasingly dangerous and Colin Kazim-Richards almost had a chance at the near post when Knight whipped in a cross.

Preston had struggled to create openings but in the 96th minute Daniel Johnson set up Browne, who sent a shot beyond Marshall and inside the far post.

Derby's Wayne Rooney: "I think it was the best performance of the season. With 10 men for so long we knew it was going to be tough, but I still felt we had a belief about ourselves that we could win the game. We had to defend well and dig in, but when we had the opportunity to break I thought we broke well in numbers and looked a threat going forwards at times, and I thought the lads gave everything.

"I thought it was a clear foul on Louie Sibley in the middle of the pitch just before the goal. I don't want to slate referees because I know how difficult it is for them, but they are big moments. That decision, he gives the free-kick and if we go into the corner the game's over and we take a very well-earned point.

"He doesn't give it. I'm not blaming him for them scoring but he doesn't give it and we lose the game. It's a clear foul which out of the four officials one of them has to see it."

"But I've been involved in games this year where we've done all that well and still not won, so it's nice when Alan pops up with a little bit of quality and that decides the match. I didn't think Derby were going to get a result in terms of a win but, equally, I thought second half we didn't test Derby enough to get the goal. I didn't think it was coming but, like I say, Alan produces a bit of quality to win us the match."