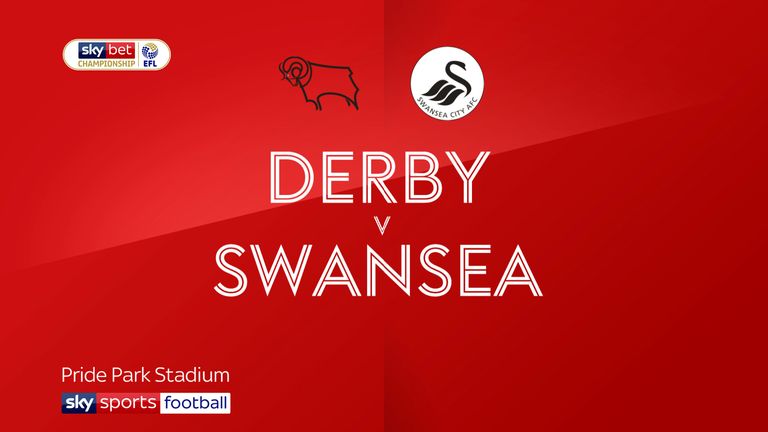 Highlights of the Sky Bet Championship match between Derby County and Swansea.

Freddie Woodman saved a penalty as Swansea held Derby to a 0-0 draw in the Sky Bet Championship at Pride Park.

The goalkeeper denied Martyn Waghorn four minutes before half-time and also made a second-half double save to earn his side a point from a game of few clear chances.

Swansea defender Mike Van der Hoorn went close with a header but the teams cancelled each other out on a blustery, wet afternoon.

Derby's two deadline day signings Jamie Paterson and Ben Hamer were on the bench as manager Phillip Cocu named the side that won at Huddersfield on Monday while Swansea brought in Aldo Kalulu for George Byers.

There was an early scare for Derby when skipper Richard Keogh was shown a yellow card in the third minute for a trip on Borja Baston just outside the area but Matt Grimes' free-kick was too high to trouble Kelle Roos.

Swansea were almost opened up when Waghorn played in Florian Jozefzoon on the right but his shot struck a defender and went behind for a corner which was wasted.

The visitors did better from a corner in the 26th minute when Grimes swung the ball in dangerously and Van der Hoorn dived to head just wide.

Waghorn flashed a shot wide but wasted a chance to put Derby ahead in the 41st minute after Jayden Bogle was brought down by Jake Bidwell on the edge of the six-yard box.

Waghorn struck the penalty low but Woodman plunged to his left to turn the ball behind and then Swansea went close in the 45th minute when Baston's cross-shot was pushed out by Roos.

Cocu made a change at the start of the second half, Paterson replacing George Evans, and Derby lost Bogle with a knee injury in the 54th minute after Woodman made a double save from Jozefzoon and Scott Malone.

Swansea had a chance a minute later when Nathan Dyer found space inside the area on the left but after his first shot was blocked, his follow-up was deflected behind.

The game was starting to open up and after Sam Surridge turned and shot wide in the 75th minute, Waghorn was unable to connect properly with a low cross and Woodman saved.

Tom Huddlestone had a shot deflected behind as Derby pressed, Keogh just failed to get his head to a cross in the 88th minute and Waghorn looped a shot just over in seven minutes of stoppage time.

Phillip Cocu: "It was a good save but it was a moment for us, an important one in the game, and if we get the goal it would lift us and then probably we would play better, more confident at a higher tempo. I think nowadays with all the information you have from games you know the penalty taker and Waggy [Martyn Waghorn] also knows but he had the confidence to take it in the angle he shot so good save, it's part of football.

"Some moments in the first half, our tempo was probably a bit too low so Swansea could reorganise and it was difficult to create a good chance on goal. In the second half, it was the other way round. Sometimes the tempo was maybe too high and we lost possession when it was not necessary and you get an open game where it goes up and down."

Steve Cooper: "Waghorn has gone that way four out of the last five and we just felt that being the first game at home he would do what he thinks he's good at. It wasn't a bad penalty, it was a really good save but fair play to Freddie, he's done his analysis and it's worked for us, we expected him to save the penalty once it went that way.

"We expected to win the game and in the game plan there were opportunities to do that. So we are disappointed we didn't create enough chances because we got into good positions - but the final ball let us down too many times."