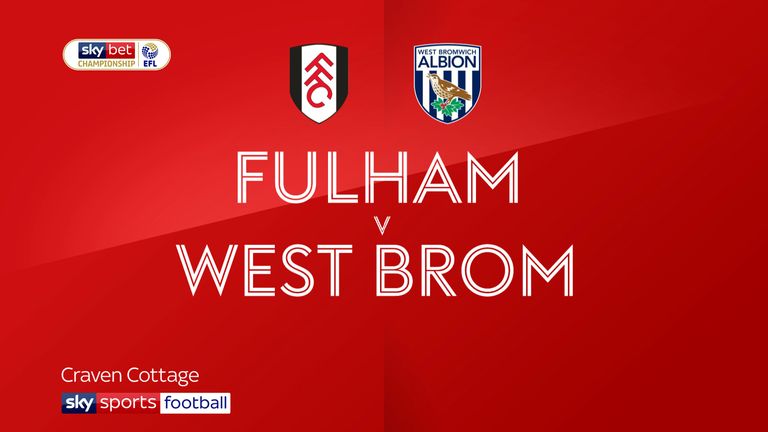 Marcus Bettinelli's error allowed Ajayi to head home after 80 minutes in the Sky Bet Championship clash on Saturday, after Anthony Knockaert had brilliantly put his side in front four minutes after the break.

It meant the spoils were shared between two of the pre-season promotion favourites, although they remain a little off the pace of the league leaders.

Fulham dominated the first half and had a few decent chances to take the lead. After 16 minutes it was Tom Cairney who found his way through, having been fed by Harrison Reed, but he rattled the bar with his effort, while later in the half Sam Johnstone was called upon to deny Knockaert and Bobby Reid in quick succession.

West Brom were happy to sit back but did occasionally carve out an opportunity. Charlie Austin especially had two half chances to score, the first on 28 minutes that he acrobatically smashed over the bar, the second seven minutes before the break as he headed Matt Phillips' free-kick straight into the arms of Bettinelli.

It took a piece of magic shortly after half-time for Knockaert to break the deadlock. Whether he meant it or not is another thing altogether, but the winger managed to find the top corner with a beautiful dinked effort from the edge of the box that left Johnstone with no chance.

West Brom didn't really threaten Bettinelli, who was in excellent form all afternoon until he gifted them their equaliser with 10 minutes to go. His poor attempt to get a corner clear saw him palm the ball straight into the path of Ajayi, who had an empty net to head the ball into.

Man of the match - Harrison Reed

Reed is onto his third loan stint in the Sky Bet Championship, having spent previous campaigns at Norwich and Blackburn, and seems to be becoming a quality midfielder at this level. He helped control the game for large swathes of the action at Craven Cottage with his metronomic passing. As it stands he is keeping stalwarts Stefan Johansen and Kevin McDonald on the bench.

Scott Parker: "I'm disappointed with the result and the way the match ended because for 60 minutes we controlled the game. The players were incredibly brave in the way we were playing because West Brom were wanting us to come onto them quickly and it takes a lot of courage to play out from the back.

"There is a reason we do that, though, especially today. We dominated the first half and had some glorious opportunities. I don't think anyone would have begrudged us if we had been 2-0 up at half-time. But then we stopped doing it. We went from front to back very early and played into the hands of a team that has a lot of pace on the break."

Slaven Bilic: "It was a fair result. Fulham are a good team, one of the favourites to go up and they can take you back to your own box. In the first part of the game, we were trying to press them too high on each individual. That's what they want and we had to change it and not press unless you can smell the moment to do it.

"But then we showed again what a good squad we have, what character we have and how resilient we are. By the end of the match, they were more happy to hear the final whistle than we were."

Fulham head to Sheffield Wednesday at 3pm next Saturday. West Brom are in action at home to Huddersfield on Sunday 22 at 12pm, live on Sky Sports Football.