Report and highlights from the Sky Bet Championship clash between Huddersfield and Cardiff City at the John Smith's Stadium as former Arsenal striker Yaya Sanogo missed a second-half penalty and ensured Mick McCarthy avoided defeat in his 1,000th game in football management 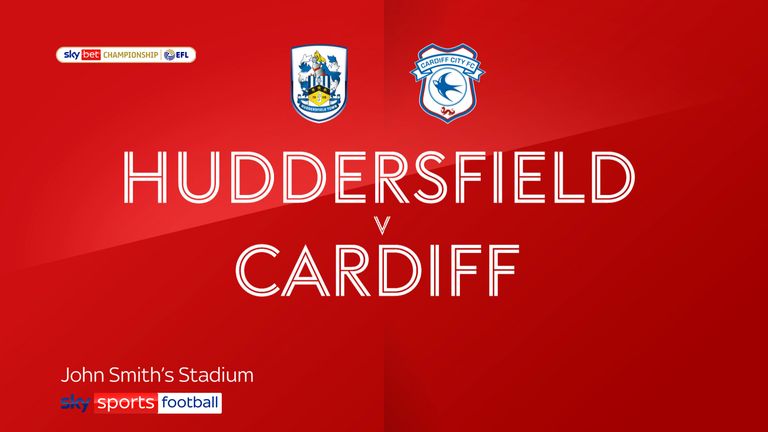 Highlights of the Sky Bet Championship match between Huddersfield and Cardiff.

Former Arsenal striker Yaya Sanogo missed a second-half penalty on his full Huddersfield debut as the Terriers were held to a goalless draw by high-flying Cardiff.

The pre-match talk had been all about Mick McCarthy's 1,000th game in football management, but it was the hosts who dominated the ball in the first half and they went close to the opener inside 15 minutes when Juninho Bacuna's free-kick was well saved by Dillon Phillips.

The second half was an altogether scrappier affair, though again it was Huddersfield who passed up another glorious chance to win the game when Aaron Rowe won a penalty and Sanogo struck his spot-kick the wrong side of the left-hand post (74).

A point was enough to extend McCarthy's unbeaten start as Cardiff boss to 11 games and lift the Bluebirds to seventh, one point behind sixth-placed Bournemouth, while Carlos Corberan's men climb to 18th, six points off the bottom three with 11 games to play

In game No 999 for McCarthy, Cardiff had beaten Derby 4-0 on Tuesday despite having less than 30 per cent possession against Wayne Rooney's men and there was a similar feel at the start in West Yorkshire, as the Bluebirds sat off, knowing their hosts would have their work cut out in bypassing their towering backline.

Visiting goalkeeper Phillips was the first to be called into action when he kept out a well-hit Bacuna free-kick, though Huddersfield's tinkering around the 18-yard box prevented them from making any meaningful progress into the area to make their dominance count.

At the other end, Harry Wilson's shot then looped up for Aden Flint, who acrobatically diverted a shot onto the bar before being flagged offside, minutes before left wing-back Joel Bagan was substituted having sustained a shoulder injury, with Ciaron Brown on to replace him. 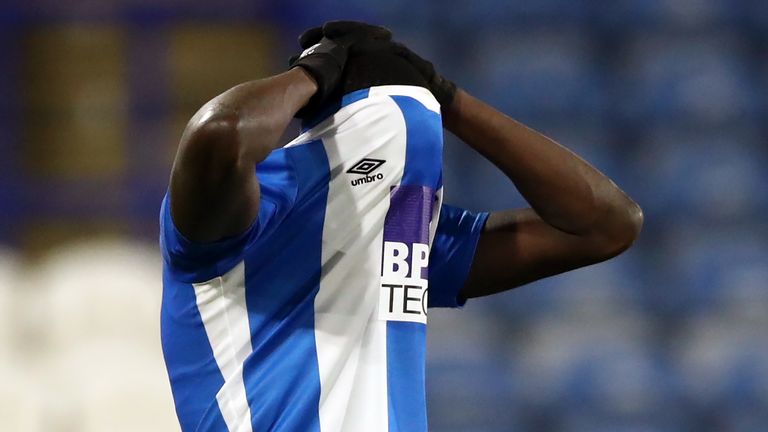 And shortly before the break, Will Vaulks forced Huddersfield's Ryan Schofield into a superb reaction save with a sweetly-struck volley after the hosts had failed to clear their lines from a corner.

Cardiff had scored 11 goals in their previous four league games yet an attack, that included Josh Murphy, Kieffer Moore and Wilson, was kept quiet as the second half wore on and almost punished for its lack of potency when Rowe was brought down by Curtis Nelson in the area.

Sanogo, though, was unable to find the back of the net from 12 yards out, meaning Huddersfield have failed to convert any of the three penalties they have been awarded in the Championship so far this season.

The hosts found time for two more chances in the closing stages; Pipa was denied by a strong Phillips save and Fraizer Campbell fired over from six yards as the game ended goalless.

Man of the match - Naby Sarr 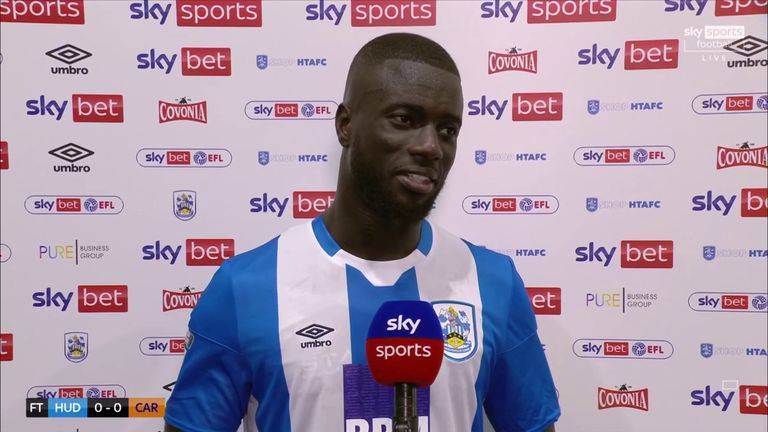 Huddersfield's Carlos Corberan: "The level of effort was very high to get this point. We could have been better in the build-up in the first half, but then we found good efforts in the transition. The penalty is a clear chance and we didn't score.

"We did exactly what we had to do to compete against Cardiff. We defended well and had three clear chances to get three points. I'm disappointed not to win tonight. Yaya was the first penalty taker tonight and the miss has a big impact on the result."

Cardiff's Mick McCarthy: "It was a really tough game that we didn't play particularly well in. We've all had a hectic schedule but the lads have been different class and put some shifts in. If you can't win it, don't get beaten - that's my view. I know they missed a penalty, tough luck on them, but other than that, we were pretty solid.

"There might be a bit more to come next week when we've had a bit of a break. We've got two or three days off now, so hopefully we can get back to the levels that we've been at and get a win when we come back."

Both teams are next in action at 3pm on Saturday, March 13. Huddersfield travel to the Kiyan Prince Foundation Stadium to take on QPR, while Cardiff host Watford at the Cardiff City Stadium.