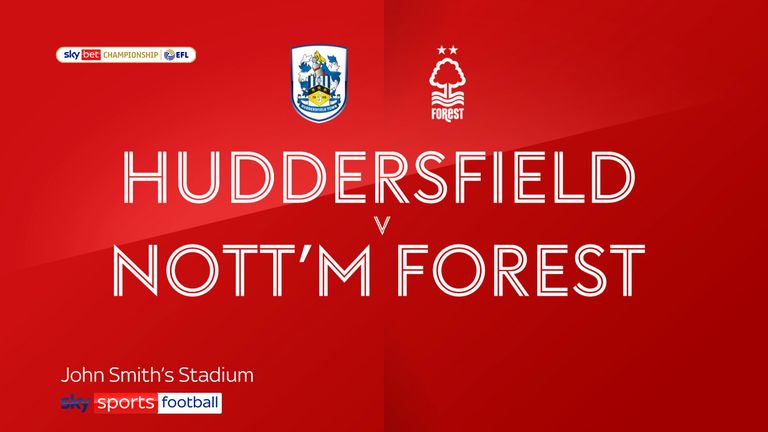 Huddersfield picked up their first points of the season as Fraizer Campbell's stunner earned the Terriers a 1-0 win over Nottingham Forest on Friday night.

Sabri Lamouchi's visitors had the better of the chances in the first half at the John Smith's Stadium, with Ben Hamer making two crucial saves - one from Sammy Ameobi the pick of the bunch.

Huddersfield built on their early dominance and scored in sensational style when Campbell latched onto Harry Toffolo's cross and sent a beautiful first-time volley into the net (54).

The result leaves Forest - who have lost their opening three league games for the first time since 1954 - inside the bottom three and increases the pressure on under-fire Lamouchi. Huddersfield climb to 16th in the Sky Bet Championship table.

With neither side having registered a league win, or even so much as a goal, in the opening weeks of the season, Lamouchi's decision to make seven changes from last week's 2-0 defeat to Cardiff - including fielding an entirely new back four - appeared to be a bold one.

Within seconds of the first whistle, the visitors could have had a one-man advantage when midfielder Harry Arter was recklessly brought down by Jonathan Hogg, who was spared a booking by referee Oliver Langford, in spite of the clear stud tracks that adorned his opponent's shin as he got back to his feet.

As the game's tempo settled, the chances from both sides began to flow. Brice Samba turned a close-range prodded effort from Campbell away before Josh Koroma went close after a mix-up but it was Terriers goalkeeper Hamer who kept his side in the game after a world-class fingertip save to lift Ameobi's sumptuous curling effort over the crossbar.

Shortly after the restart, Campbell produced a moment of magic to nudge Huddersfield ahead. As Toffolo reached what looked to be a lost cause at the byline, the left-back clipped the ball into the area, where the frontman opened up his body and volleyed in just his third goal in the last 12 months.

As Forest pushed, the hosts held firm, though Lewis Grabban went close to a spectacular equaliser of his own with a thunderous 20-yard effort just moments after entering the field of play in place of Lyle Taylor.

There was a final chance for Carlos Corberan's men to add a second and some comfort to the final minutes when Koroma and Adama Diakhaby tried their luck inside the area, but Samba stood strong to keep out chances from the pair from close range.

Man of the match - Romoney Crichlow-Noble

Starting just his second game for the club, the 21-year-old centre-back looked assured in defence alongside the experienced Richard Stearman against Forest, keeping his composure on the big stage and helping to keep Lyle Taylor and Lewis Grabban - albeit at separate times - quiet.

Huddersfield's Carlos Corberan: "It feels very positive for me because the players deserved the win that we got today. I think Forest were fantastic but we had some good moments in the first half, trying to dominate with the high press and I think it worked very well in the second half. We had some chances that we couldn't take advantage of and that's why we suffered a bit at the end.

"It was important for me that we controlled the game better, had more of the ball and had more chances and at the end, when you have the chances, you can score the goals."

Nottingham Forest's Sabri Lamouchi: "It was a very bad result, though about the performance I'm not so negative. We should score, especially in the first half where there were one or two unbelievable saves, but it was a very bad start and with a half-chance, they score.

"It's not about time; we don't have time, unfortunately. Some players are not ready, some players are injured. The new players try to play at their level. The first half was much better than the first two games and the beginning of the second half was not so bad but we can't concede a goal like that. Our mistakes cost a lot."

Both sides are next in action at 3pm on Saturday October 3. Huddersfield travel to the New York Stadium to face Rotherham, while Nottingham Forest host Bristol City at the City Ground.