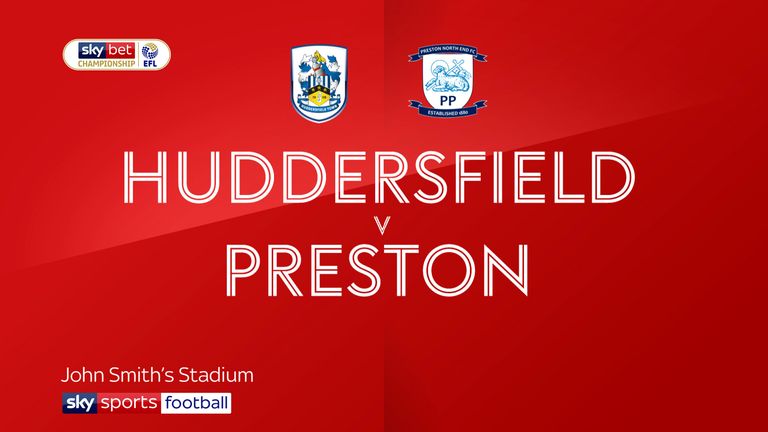 Highlights of the Sky Bet Championship match between Huddersfield and Preston North End.

Huddersfield and Preston played out a goalless draw that did little to enhance their positions at either end of the table.

After a game of very few chances, both sides had to settle for a point that left Huddersfield two points above the relegation zone and Preston six adrift of the play-off places.

Huddersfield had climbed out of the bottom three on Wednesday after their 3-0 win at Birmingham had halted a run of three straight defeats, but they never went close to following up with another vital three points.

Preston's winless streak was extended to seven matches and they appear to have run out of ideas in their bid to rekindle their play-off challenge.

With both sides still having plenty to play for, the first half was high on endeavour, but with little end product.

Midfielder Jonathan Hogg, making his 200th league start for Huddersfield and his 300th career league start, typified the application on show and came out on top in most of his challenges.

Visiting defender Bauer headed one corner from Harrop wide and another over the crossbar, while Town's only effort on target before half-time was Lewis O'Brien's drive, which was easily gathered by Declan Rudd.

Town forwards Steve Mounie and Colin Quaner replaced Fraizer Campbell and Elias Kachunga at the break, but they had little impact.

Town boss Danny Cowley sent on Arsenal loanee Emile Smith Rowe for Pritchard soon after, but both sides continued to struggle in the final third.

With both defences easily on top, Preston replaced Browne and Harrop with Jayden Stockley and Maguire.

Ledson did well to cut out Town substitute Chris Willock's left-wing cross before Sinclair snatched at his late chance and Maguire hit the side-netting in the dying moments.

Huddersfield's Danny Cowley: "Our focus is just on us. I feel terribly sorry for the people of Wigan, the staff, the players and particularly the supporters. I love football. I'm a football supporter myself and I don't like to see what's happening to them happen in football.

"We want to do it on our own merit. I'll take no pride or feeling of content if we stay up by virtue of another team going into administration. I want to do it on merit because that's what I set out to do when I came in.

"It wasn't one for the purists. But when you don't play well you have to keep the back door closed and we did that very well."

Preston's Alex Neil: "I don't think there was a lot created in the game. I can't remember a shot that they did anything with. We wanted to make sure we were hard to beat and we wanted a clean sheet.

"We had those two chances at the end there, but unfortunately we didn't get ourselves set enough to hit the target. I'm not over the moon with the performance. We wanted that clean sheet, but we need to find a better balance and do more in the final third if we are to challenge higher up."