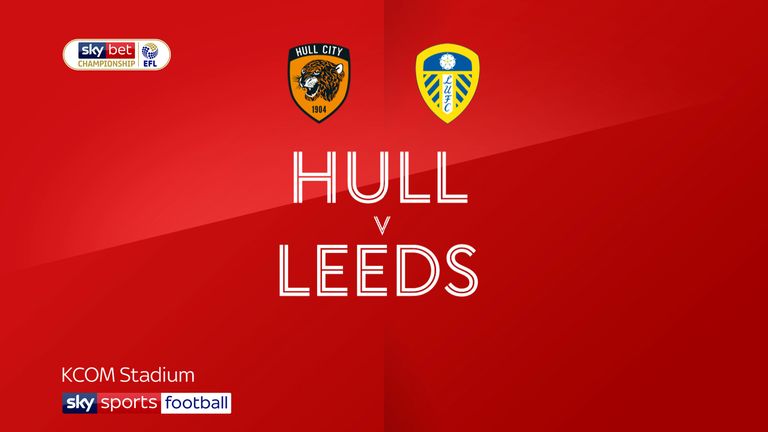 Leeds produced a thoroughly professional performance to see off relegation-threatened Hull with a 4-0 win at the KCOM Stadium and send out a statement of intent to Championship leaders West Brom.

In a fairly open first 45 minutes, Leeds took the advantage in the Yorkshire derby thanks to Luke Ayling's deflected strike (5), but the ever-influential Pablo Hernandez made it two shortly after the break (47).

The visitors upped the ante from there on in and sealed a thumping victory inside the final 10 minutes of the game when Tyler Roberts came off the bench to add a quickfire double (81, 84).

Marcelo Bielsa's team move to within a single point of the Baggies after their 1-0 defeat to Wigan at The Hawthorns, while the hosts drop to 18th in the table, four points above the relegation zone.

How Leeds sauntered to victory at the KCOM

Just a few months ago, both of these sides were firmly in contention for promotion back to the Premier League. Yet while Leeds have overcome a stumble to remain in with a shout of the title, Grant McCann's side have gradually slipped towards a new battle altogether.

Without a win since New Year's Day, the Tigers' hopes of getting a result were raised when Leeds goalkeeper Kiko Casilla was banned for eight games for racist comments made to Charlton winger Jonathan Leko.

However, any hopes of catching Casilla's teenage replacement Illan Meslier unawares were quelled early on. Ayling collected a pass 25 yards from goal, set himself, and hit a shot that left opposing stopper George Long reeling when it took a heavy deflection off Callum Elder to nestle in the bottom left corner of the net.

The visitors appeared to be in a relentless mood and it was almost two soon after when Hernandez struck the crossbar. The chances then dried up and Hull went close to drawing level when George Honeyman arrowed Liam Cooper's clearance off target.

Also require a maximum of 9⃣ more wins to win promotion to the @premierleague after a 16-year absence pic.twitter.com/jdO8RqXRIZ

Inside 120 seconds of the restart, there was a clear shift in intensity from Leeds. Hernandez doubled their lead when he slid Helder Costa's pass beyond Long, but it was the hosts' stopper who kept his side from going further behind with a pair of top-class saves to deny Jack Harrison.

McCann introduced Nobert Balogh in place of Josh Magennis after the hour-mark and he was a whisker away from reducing the deficit when his fierce volley cannoned off the post, but it was Bielsa's change in attack that changed the game.

Marcelo Bielsa made two alterations to the side that beat Middlesbrough on Wednesday night; one enforced, one tactical. Illan Meslier started in goal as Kiko Casilla started his eight-game ban, while Kalvin Phillips returned from injury at the expense of Gaetano Berardi.

The luckless Patrick Bamford made way for Roberts and though the 21-year-old had scored just once in 12 appearances before the game, he plundered twice in three minutes, first tucking away Mateusz Klich's pass, before combining with the Polish midfielder to divert a sublime angled header over the line.

Man of the match - Mateusz Klich

The Polish midfielder was making his 82nd consecutive Championship start at the KCOM Stadium and he marked the achievement with another superb box-to-box performance in midfield, saving the best until last when he laid on two quite exquisite assists for Tyler Roberts.

Hull's Grant McCann: "The early goal has knocked us a bit but we hit back. There was very little in the first half. The goal just after half-time knocked the confidence. Second half that early goal has thrown it all up in the air.

"They are a top team and there is no doubt they will probably go on to get promoted this year. This result is not going to define our season, we've got some big games coming up."

Leeds' Marcelo Bielsa: "He [Meslier] was calm and confident and he took risks. He gave us the feeling that he's confident. The authorities expressed themselves, also Kiko, also the club. We must accept the rules of the competition and accept those decisions. All of us are against any kind of discrimination, this is very clear. All of us are against the racists, he [Casilla] is the first one.

"In the first half we didn't defend well. We started the game with one line of four defenders and after we changed with a line of three defenders. In the second half the second goal helped us."

Both sides are next in action at 3pm next Saturday. Hull travel to fellow relegation candidates Stoke, while Leeds host Huddersfield at Elland Road.