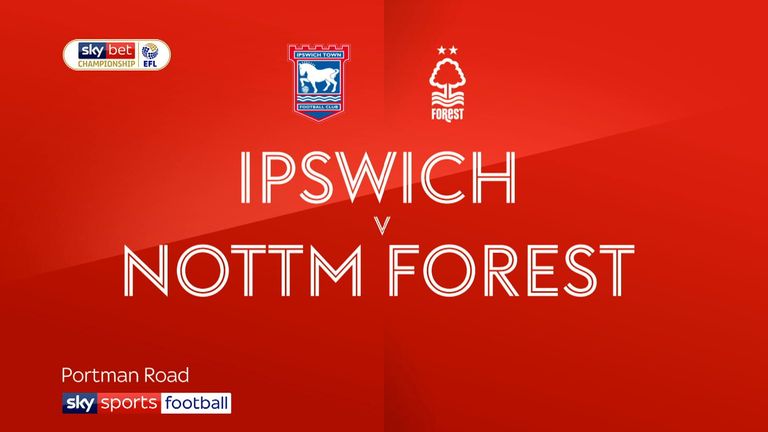 Nottingham Forest kept their slim hopes of gaining a Championship play-off place alive with a 1-1 draw at bottom-placed Ipswich.

Collin Quaner put Town ahead in the fifth minute before Molla Wague replied for Forest, who are three points off the top six, on the half-hour.

Ipswich had glorious chances to pick up only their fourth win of the season but missed opportunities, while referee Keith Stroud controversially ruled out a Jon Nolan goal.

A neat move down the right led to Huddersfield loanee Quaner opening the scoring for the home side.

It came after good interplay between Teddy Bishop, James Bree and Gwion Edwards with the latter's cross being met by the striker who guided the ball into the net from inside the six-yard box.

Forest pressed for an equaliser and won another corner in the 31st minute which resulted in them drawing level.

It was taken by Joe Lolley and struck Nolan on the goal-line and as Ipswich goalkeeper Bartosz Bialkowski attempted to grab the ball, Wague stretched out to knock the ball in.

A free-kick from Lolley was then headed just over the bar by Daryl Murphy.

And, in injury time, Murphy had the ball in the net following another throw-in from Jack Robinson but it was ruled offside.

Trevoh Chalobah, who came on to replace Cole Skuse in the 41st minute, had the home crowd gasping when his shot went narrowly wide.

Ipswich were now having the majority of the play with 30 minutes left and should have taken the lead in the 63rd minute. Alan Judge was found clear on the right and his cross was met by an unmarked Nolan, who headed just wide of the left-hand post when he should have scored.

Stroud then disallowed an Ipswich goal in the 73rd minute when a free-kick from Judge found Nolan just inside the penalty area and the midfielder fired high into the net. He ruled that he had failed to blow his whistle for the kick to be taken which resulted in a frenzy of abuse from the home fans.

Two minutes later Matty Cash's shot at goal was parried by Bialkowski and Murphy followed up but his attempt was saved again by the Ipswich goalkeeper.

The home side were peppering the Forest goal but Costel Pantilimon stood firm and in a frenetic period of additional time Ipswich were denied a penalty claim when substitute Kayden Jackson appeared to be fouled.

Paul Lambert: "How well the guys are playing is fantastic and the crowd were absolutely brilliant and the two are bouncing off each other incredibly well. If we had walked away with a 4-2 win I don't think anybody would have complained.

"If we had took our chances in the second half we would have least had three and we had a great claim for a penalty but that never happened. The referee said wait for the whistle (for the free-kick) and it was a great goal, a great free-kick, quick thinking and that seems to be the way it goes for us but I'm really, really happy with our play.

Martin O'Neill: "We got off to a very poor start and conceded a poor goal from our view point from Ipswich's first attack. We fought our way back into the game and got the equaliser and obviously a big moment just before half-time when I thought we scored and the TV replay looks as if we were two to three yards onside.

"That is obviously very disappointing but it doesn't stop the fact that Ipswich played very strongly and very well and it was no surprise to me in that sense. They might have only won a number of games this season but they are playing with good old enthusiasm."